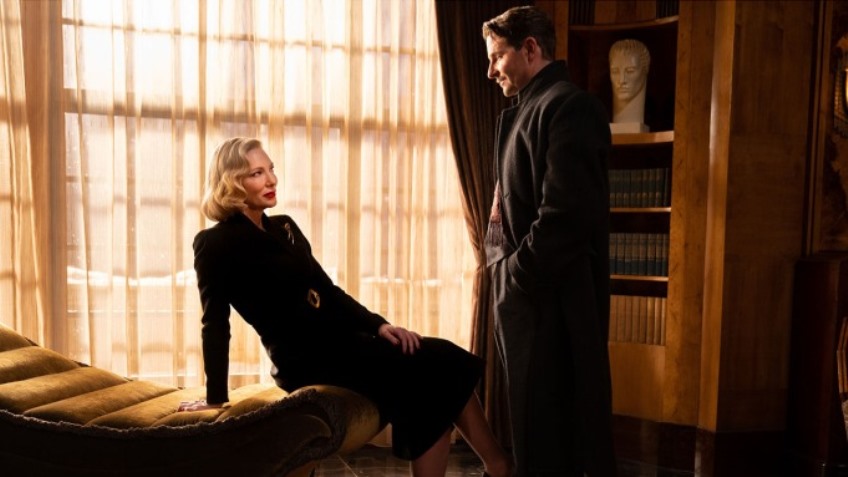 The only monsters in Guillermo del Toro’s topical adaptation of William Gresham’s novel are the humans.

In 1962, William Lindsay Gresham, committed suicide at age 53 in the same hotel where he wrote his only successful novel, Nightmare Alley sixteen years earlier. With the money from the 1947 film adaptation starring matinee idol Tyrone Power, Gresham and his then-wife, Joy Davidman (the subject of the play and movie Shadowlands) moved into a mansion in upstate New York – which he was to lose to the IRS, after losing Davidman to infidelity and alcoholism. When Gresham’s body was found, he had in his pocket a few business cards that read: No Address. No Phone. No Business. No Money. Retired.

In Guillermo del Toro’s topical adaptation, when we first meet protagonist Stanton (“Stan”) Carlisle (Bradley Cooper), this description would be accurate; only this charming, ambitious hustler with the sexy body and piercing blue eyes is not retired; he is just getting started on his American Dream.

It is not as auspicious beginning. After dropping his (apparently abusive) father’s body into a hole in the floorboards of a dilapidated farmhouse and then tossing in a match, Stan takes a bus to the end of the line: a travelling carnival, where he accepts a temporary job dismantling the tents. In the first act he sees, a rabid, emaciated, skeletal man (Paul Anderson) grunts and cowers. Indistinguishable from an animal, the starving beast tears at the neck of a live chicken dropped into his cage for an extra quarter per customer.

Stan ignores all the prophetic warnings that del Toro packs into the subsequent search for the runaway geek and in his conversations with Pete (David Strathairn) the brains behind a successful clairvoyant act Peter preformed in Vaudeville with his loyal wife Zeena (Toni Collette) – until he became an alcoholic. Now the act is doing average business in dodgy travelling carnivals.

The carnival manager Clem Hoately (Willem Dafoe) recognises Stan’s drive and customer rapport and offers him $5 dollars for the radio he took from the farmhouse and a hot meal if he’ll join the carny. Stan soaks in everything he hears and sees, but so far, we have not heard him speak.

When the geek escapes on a stormy night, Stan is charged with bringing him back. He searches in the prophetic House of Damnation where the deadly sins of greed, lust, pride, and wrath – and all the sins that Stan will commit – are written on the doors. The motifs of the film are eyes and mirrors, and in his nocturnal search for the geek Stan jumps, as he confronts himself in a mirror, above which is written: “take a look at yourself, sinner.” The foreshadowing is everywhere, but fate is fate.

Stan speaks for the first time to the geek, cowering in a corner of the House of Damnation, reassuring him he means him no harm. The geek picks up a rock to throw at Stan, whispering, ‘I’m not like this.’

It is following this episode that Clem buys Stan a hearty breakfast and tells the curious newcomer how he gets a man to stoop so low that he will become the carny’s geek. The film is set between the Great Depression and the onset of WWII, and Clem suggests he has no problem finding a single man in need of a temporary job. He gets him hooked on free booze until the man would do anything for his fix. This is the tactic of sex traffickers, hooking women on hard drugs to keep them compliant. Gresham first heard of it when volunteering in the Spanish Civil War.

But the more topical theme of the film is how people become consumed by the lies they tell for a living. The danger, as Pete warns Stan, is when you start believing the lies. Seduced by middle-aged Zeena (in fact, Collette and Cooper are roughly the same age) who engages the fast-learning, personable and clever stranger for her act, Stan learns how the act works so that Zeena appears psychic, responding to verbal cues fed to her so she can answer written questions from the audience that Stan collects. He also “borrows” Pete’s private book and picks up tips on cold reading (in the vein of Sherlock Holmes’s elementary observations), that he displays to dazzling effect when a police officer comes to shut down the carny.

Zeena is a steppingstone to the Ten-in-One carnival’s prettiest, youngest girl, Molly (Rooney Mara) who is the electricity conductor girl, scantily clothed. Molly is closely guarded by Bruno (del Toro regular Ron Pearlman), the ageing strong man who wishes Molly were not out of his reach. When Stan suggests that Molly add an electric chair to her act – which he makes for her – and it proves a hit, he is one step closer to winning her trust. They soon decide to elope as a double act in the big city.

Two years later the pair are doing well: living in expensive hotel rooms and dazzling the upmarket dinerclub crowds. Dr Lilith Ritter (Kate Blanchett), a seductive psychiatrist who aims to call the handsome showman’s bluff, appears to have met her match in Stan, who is now such a pro that he identifies the contents of her purse and seems to recognise a fellow con artist in her. Ritter hands Stan her card. She has wealthy patients with dark secrets and Stan senses there’s a deal to be done.

This is del Toro’s (Crimson Peak, Hellboy, Pan’s Labyrinth) first movie without the supernatural or monsters, but it is obvious the monsters are the characters that populate this increasingly grotesque world. Millionaire Ezra Grindle (Richard Jenkins) forced the only woman he loved into having the abortion that killed her, and now wants Stan to arrange a séance with her. Just before this ill-fated event, we learn he is a serial abuser. If you have to choose between Grindle and Stan, you would choose Stan, but that’s like choosing Mussolini over Hitler as your next PM.

Although the closest Kate Blanchett has gotten to playing a seductress is in Carol, her role feels familiar, as she is almost always sexy and sophisticated. It’s as though we have seen these femme fatales before, and we never for a minute believe she and Stan are sincere or could be a couple.

The Academy Award winning The Shape of Water was an unlikely Cold War love story with humanity, hope and a fairy tale ending. Del Toro has said that he wanted to convey his pessimism about Trump’s America. While Nightmare Alley is a moral parable, there is nothing to learn from it. Del Toro sends us on a bleak journey with his unlikeable protagonist who is not, as in the novel, a young man. But we know the outcome, as does Stan, as evidenced by the ironic laugh that ends the film. The film is gorgeous too to look at and the 1930’s sets are worth the price of admission. But there is no suspense and no surprises as this journey is a perfect circle.