Home / LIFESTYLE / REVIEWS > / FILM REVIEWS / A wacky South Korean grandma arrives to save a failing marriage in Arkansas in a quasi-autobiographical drama. 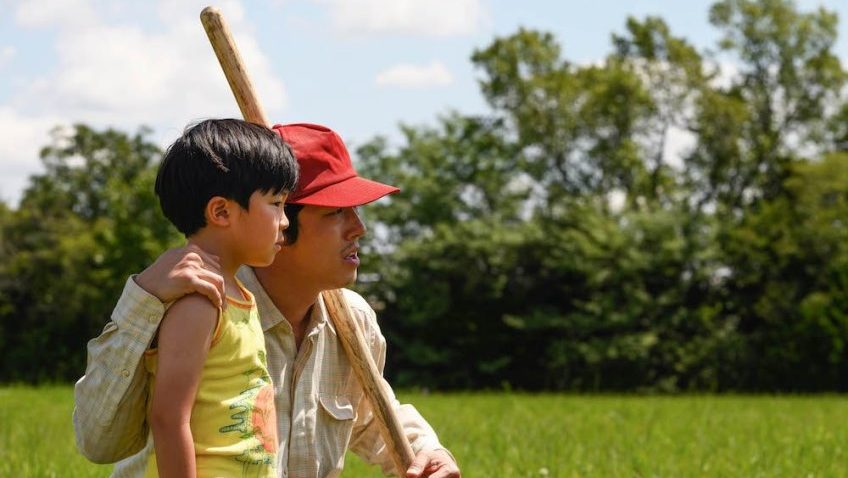 A wacky South Korean grandma arrives to save a failing marriage in Arkansas in a quasi-autobiographical drama.

A long, hot drive from California to Arkansas with two children, young David (Alan Kim) and his old sister, Anne (Noel Kate Cho) is not going to help any strained marriage, particularly when husband Jacob’s (Steven Yeun) fresh start turns out to be a caravan on concrete blocks surrounded by an unplanted field in the middle of nowhere. Handsome, soft spoken, a tad naïve but determined, Jacob who sexed chickens in a hatchery in California for ten years, to support his family in two countries, is euphoric at the prospect of being a landowner and entrepreneur.

‘This is not what you promised,’ are the first words we hear from his pretty wife Monica’s (Yeri Han). When she enters the motorhome – though it looks remarkably spacious – she adds, ‘It just gets worse and worse.’

Later in the film, things get worse when Jacob, who tries to dig for a well to avoid the expense of county water when the crops and the taps are dry. ‘We’ll go broke living here,’ Monica mopes, ever worried about the farm haemorrhaging money that is needed for young David’s heart condition.

‘In California we could pay off our debt,’ Monica points out. Jacob retorts, ‘by chicken sexing till I die?’ The job has an element of symbolism in it as the female chicks are kept while the males, considered useless, are incinerated. A loving and responsible family man, Jacob understands Monica’s need for security, but pleads with Monica that the kids ‘need to see me succeed at something for once.’

This is the perfectly balanced, central tension that plays out in writer-director Lee Isaac Chung’s drama, Minari, based loosely on his own life growing up in the 1980s in rural Arkansas with his South Korean parents and grandma. This is not however, a coming-of-age story, as David’s point-of-view is compromised for more conventional story telling. As a result the film loses some of its freshness and our involvement.

There are however wonderful details in the story that you know are taken from real life. These include scenes in the chicken hatchery where another South Korean woman reassures Monica that, unlike in California where you have to be fast, here she will pass muster. Paul (Will Patton), a weird Christian mystic seen dragging a cross down the highway, is a Korean War veteran who seems to get along better with Jacob than with the rest of the community who mock him. He is an embarrassing oddball, but, as an experienced farmer who believes in Jacob’s dream, he becomes Jacob’s only friend and his secular saviour.

There is a wonderful scene when the family go to Church to try to make new friends. Anne meets a girl who seems enthralled by the Korean language, but Anne, who is forced to put aside her needs to care for David and run the household when their parents argue, is marginalised as a character and has no other scenes alone.

At the church, David is befriended by blond, fair skinned Johnnie (Jacob Wade), another outcast, whose life might give David a glimpse of what a broken home is really like. While the two boys bond over a card game that David’s grandmother – more on her later – has taught him, at breakfast in Johnnie’s dilapidated home, Johnnie’s father, looking the worse for wear, tells him, ‘don’t tell your mother that I was out all night.’ Johnnie becomes more than a slice of Arkansas life, and would like to see how his friendship with David develops, but we never do.

Now for the grandma. After a particularly bad argument, Jacob and Monica agree to bring Monica’s widowed mother, Soonja (Yuh-jung Youn), over from South Korea to keep Monica company and babysit for David while the parents are at the hatchery.

Soonja soon takes over the movie. Rather than providing a break from the downward spiralling marriage theme the bulk of the film is the story of David’s changing relationship with the grandmother he never knew and resents. This relationship changes in a sentimental way, but we are programmed to believe it changes rather than really seeing or feeling the change.

At first, David sees his grandma as an intruder who does not share’s Anne’s room, but his; and useless because she does not bake cookies. You might share David’s concerns. She does not speak English, does not cook or clean and, when not swearing at a card game, sits glued to TV wrestling, ignoring the children. You wonder how she could help let alone provide good company for Monica.

Grandma has, however, brought Minari from Korea, a symbolically resilient plant (a variation on watercress) that will grow even more strongly in its second season, after it has died, in a kind of rebirth. So maybe the annoying Soonja is wiser than she comes across? Maybe, but, being over 70, she still has to become a burden for the family with ill-health, a rite of passage for older characters in American movies. And, her stubbornness causes a catastrophic event that nearly ends Jacob’s dream.

The comic relief supplied by Soonja’s character might make some people laugh, or, more likely, smile, but Yuh-jung Youn’s performance is overegged and cliched.

Moreover, the rogue grandma has been done before – and better. Last year, in Lucky Grandma, Tsai Chin was great as Grandma Wong, a Chinese woman in NYC whose foray into gambling when her husband leaves her broke, gets her into trouble with the Mafia. And six years earlier, in Miss Granny, South Korean star Nah Moon-hee and director Hwang Dong-hyeok show us that behind every septuagenarian is the 20-something who will never leave her.

The Gold Standard for unorthodox grandmothers was set in 2015 by Lilly Tomlin in Paul Weitz’s hilarious, brilliantly written Grandma. Tomlin’s grandma has a life we could believe and a backstory that is integral to the main action. Her interaction with her estranged daughter and her bond with her granddaughter is nuanced, touching, funny, and very real. That Tomlin was not nominated for an Oscar was a travesty, particularly when her subtle, spirited yet moving performance is measured against Yuh Jung-Youn’s manic performance.

Minari holds out attention and introduces us to new experiences, but the way in which potential health problems and actual catastrophes are neatly reduced or disappeared, weakens the story, including a fire on a 108-degree day that thoughtfully stops just short of the house.