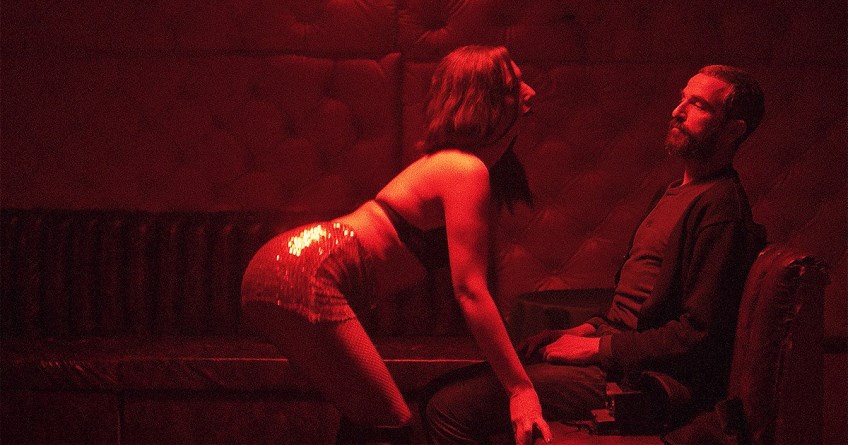 The setting for this beguiling debut feature by Greek co-writer/director Christos Nikou, is a sparsely populated Athens, sometime before mobile phones, when people danced to Let’s Twist Again Like We Did Last Summer, although the dancing we see is part of a self-cure regime for a mysterious ailment. The city has been struck by strange pandemic which results in sudden amnesia. Anything about a pandemic makes a film instantly topical, but, like the fruit, Apples is a bitter-sweet film with a sharp twist.

Bearded, lanky, thirty-something Aris (Aris Servetalis) is banging his head on the wall of a large, comfortable apartment that the camera pans across to reveal a feminine presence, or absence. After hearing an advertisement about a New Identity Hospital for amnesia victims, Aris abruptly leaves his flat like an automaton and boards a bus. He awakens at the end of the line with no memory of where he has come from or where he is headed.

The bus driver seems to recognise the symptoms. Aris is despatched to the Disturbed Memory Department of a neurological hospital. It is here that those without families to reclaim them, like Aris, embark on a rigorous, monitored program designed to prepare patients for a new life. We do not hear a doctor prescribe an apple or two a day, but throughout most of the film, Aris munches on apples.

In his surreal medical programme, he must spend his time creating new memories to replace those that have been lost. He is required to use a Polaroid camera to take the equivalent of “selfies” while enjoying various normal activities, like bike riding, or carp fishing, and going to the cinema.

When Aris leaves a cinema, he sets up his Polaroid camera for a photo next to the poster of the film he has seen, The Chainsaw Massacre. Free spirited Anna (Sofia Georgovassili) approaches Aris and asks him to take her picture in the same spot. It is obvious that Anna is interested in Aris, who, though less enthusiastic, goes along with his vivacious new friend as they form a strained relationship.

Anna has the same instructions as Aris, but she is slightly more advanced in the staged procedure, which includes kinky sex in the toilet of a nightclub. When Aris catches up to this point in the instructions, he realises that her invitation for sex in the disco toilets was not as spontaneous and original as it seemed.

This is not the first film about memory loss, or, more specifically, about memory erasure and programmes, legitimate or not, to make or use new memories. The 1990 blockbuster, Total Recall, based on Sci-Fi writer Philip K. Dick’s story We Can Remember It for You Wholesale, was followed by Michel Gondry’s Eternal Sunshine of the Spotless Mind, where, after an argument, a girlfriend and boyfriend have their memories of one another erased by a NYC specialist treatment centre.

Christos Nikou is aware of these and other precedents. Nikou was who was not only the Second Assistant Director of Yorgos Lanthimos’s (The Favourite, The Lobster), breakthrough film, the absurdist psychological thriller, Dogtooth, but Assistant Director on Richard Linklater’s utterly romantic comedy Before Midnight.

Nikou’s darkly comic, absurdist style and chilling undertone are reminiscent of Lanthimos’ best-known films, but closer in tone to the lesser-known Alps. Apples is less an homage to Lanthimos and other filmmakers, than a calling card, and he uses our collective knowledge of all of these films to turn his low-budget rendition into a variation on a theme with a new look (it is fittingly shot in the claustrophobic, 4:3 “television” ratio) style and meaning. Cate Blanchett is one of the Executive Producers of this debut feature which is quite an endorsement.

While the film invites us to contemplate the advantages and disadvantages of memory loss, there are clues, from an opening shot in Aris’s flat, to a touching visit to a married man dying alone in hospital, that Apples is about another kind of loss that is far removed from Sci-Fi.

Some of the middle section of the film becomes tedious, particularly the memory creation sequences, and the relationship with Anna is never involving. At times Nikou’s deadpan style is more self-conscious than humorous. But Servetalis was clearly cast in the role for his poker face. His controlled performance creates a kind of tension, sustains the mystery and keeps the viewer on their toes. Nikou does the same, and it is worth seeing the film again once the moving last scene has sunk in.

You might notice that when Aris sings along to the words of Sealed with a Kiss, on the car radio, Anna – who claims to remember how to drive – points out euphorically that he has remembered the lyrics. In a memory test he is given, the administrators ask him to match well known music with images. Aris pairs the music of Swan Lake to an image of a Mariachi banjo player but is that a desperate, sheepishly hopeful look on his face or a sly grin? And, in one of the most captivating scenes, Aris, with a look of horror on his face, empties his bag full of apples when the friendly fruit stall salesman, mentions encouragingly: “apples are good for the memory.”