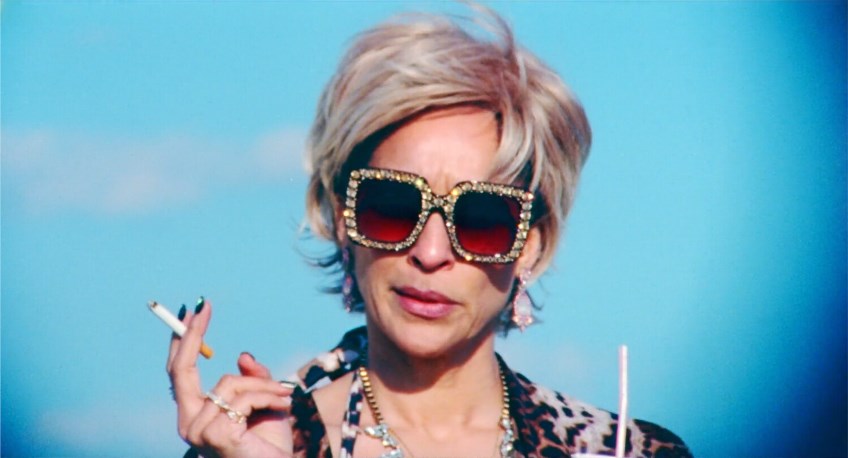 Alexandre Rockwell gets fine performances from his family of actors, in an uninvolving dysfunctional family drama.

In his latest film, Sweet Thing, Alexandre Rockwell brings back Will Patton from his highly regarded 1992 breakthrough feature, In the Soup and brings back his two children (Lana and Nico Rockwell) from his charming, 2013 coming-of-age-road-movie, Little Feet. Also returning is Little Feet’s monochrome 16mm film to capture another coming-of-age-road-movie in a whimsical faux French New Wave fashion. As in Little Feet, Lana Rockwell, now 15, and Nico, now 11, play impoverished kids who live, virtually unparented, with their loving, but irresponsible, alcoholic father. Though the circumstances are different (in Little Feet the father is incapacitated with grief by wife’s death), the father’s condition is once again the catalyst for the children’s departure on a journey through innocence.

Though the main performances are terrific, the components that worked in what are arguably Rockwell’s two best films, here lack immediacy and insight. It is as though Rockwell is searching for the ingredients of an outdated recipe.

Billie (Lana) has a lovely voice and is proud to say she is named after Billie Holiday. Holiday becomes a kind of role model for her and when Billie fantasizes about the famous singer, the monochrome turns to bright colours that sparkle like foot lights.

She lives with her brother and father in a ramshackle house in what seems to be contemporary Bedford, Massachusetts, but, curiously, without computers or smartphones. Without friends either, it seems, and with no interaction with the modern world beyond their claustrophobic, threadbare home. And without social services, either, for if this dad (Patton) has custody of the kids, wait until you meet Mum.

As in many dysfunctional families we see in the movies (most recently in Minari and The Nest), the older teenage sister plays mother to her younger brother, growing up before her time. When Adam comes home drunk, Billie is also a carer for her father.

Dad, or Adam, who is doing seasonal work as Santa Claus (another Bad Santa), clearly loves his children, but he loves his booze more. Instead of life revolving around their needs, the kids respond to Adam’s mood shifts on tenterhooks. Adam gets an appreciative hug when he surprises Billie with a stolen toy guitar for Christmas, only to break it in a drunken spat a few hours later.

When Adam goes too far, he is put in rehab and the children go to live with their estranged mother (Karyn Parsons, their real mother and Rockwell’s wife), rather ironically named Eve. Adam is not the only man to this Eve, however, and Eve is living the high life with another alcoholic, Beaux (M.L. Josepher). Beaux has a beach house and more money than Adam, but he’s not just another drinking partner for Eve: he is a brute, a wife beater, and, Nico discovers, a paedophile.

If this litany of childhood misery were rationed across an absorbing plot, it might be more digestible, but Rockwell keeps heaping it on. When Billie meets a resourceful street urchin named Malik (newcomer Jabari Watkins) on the beach near Beaux’s house, his dysfunctional family story – similar to Billie’s – is narrated one night in a mansion they break into – making it doubly hard to respond to emotionally.

The structure is episodic, with purple passages montaged and set to music, like American Honey (in which Will Patton plays a backseat cowboy), but Sweet Thing lacks that film’s energy, urgency and its depth of character. Just when you start to feel restless with this lack of narrative drive, Rockwell introduces a real moment of drama. Malik intervenes to save Billie from Beaux and the children flee.

Their goal is to get to Malik’s father in Florida, but they don’t even get as far as Ratso and Joe Buck in Midnight Cowboy. After various adventures on their own, frolicking in the sea, dressing up in the mansion while the owners are away, and finally having fun like children should, they get no further than a caravan park on the sea in Massachusetts.

Here the film peaks in a chilling turn when an older couple offer the famished youngsters tuna casserole (another bit of nostalgia) and a safe place to sleep like Grandma reaching out to three Little Red Riding Hoods. Rockwell knows his cinema (identify the theme tune that plays throughout the film) and those who recall Hitchcock’s The 39 Steps might be reminded of the scene when fugitive Richard Hannay’s Scottish host makes a phone call while he is sleeping.

Lasse Ulvedal Tolbøll’s primarily monochrome cinematography contributes to the atmosphere of the film with visceral underwater sequences and a magical fireworks display on the beach that summons up balmy July nights in New England. Lana Rockwell is shaping up to be an accomplished actress, though there is, sadly, insufficient chemistry between her and the skate boarder Rockwell pulled out of obscurity to play free wheelin’ Malik. Paxton is terrific, and if his role is confined to portraying a weak, but ultimately repentant, alcoholic, he does so convincingly.

Billie’s half narration is not a problem until we hear at the end, with no sense of scepticism, that human nature is more resilient than anyone ever imagined. Rockwell sprinkles fairy dust on everyone to give the film an unlikely happy ending. We have to take Lana’s word for it. But if the adults have gone on a journey of self-discovery that will ultimately improve their children’s lives, the children, the protagonists in the film, do not emerge at the end any different from how they were at the beginning.