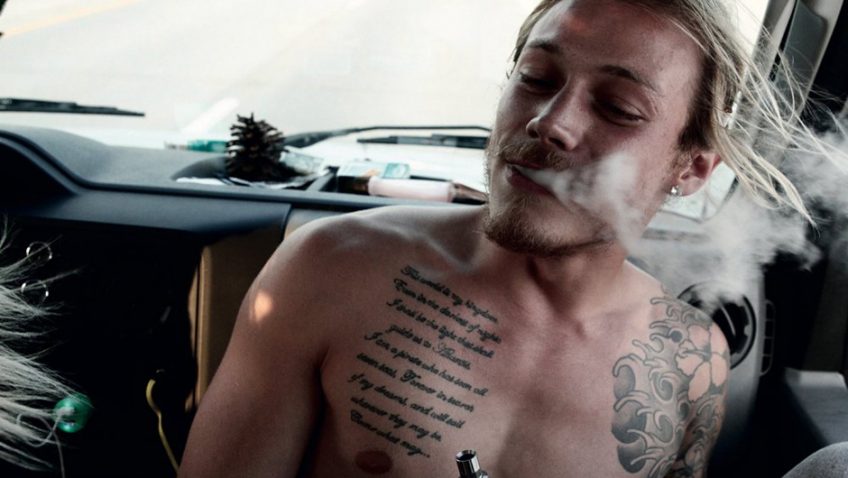 , British writer/director Andrea Arnold leaves the gritty slums of Glasgow (Red Road) and the soulless council estates of east (Fish Tank) for the wide expanses of America where she takes us on a mesmerizing, if plotless, road trip across the bread basket states in the company of a motley group of young people selling magazine subscriptions. As form and content merge, we experience the discomfort of shared rooms in run-down motels; the tedium of long spells in the van and exhilarating moments that make the trip worthwhile.

Texas born waitress, top athlete and university drop out, 19-year-old Sasha Lane, (now 21), was plucked from the obscurity of a crowded beach during spring break and asked to go on a journey with a 55-year-old British woman claiming to be a director in search of her star. This was Andrea Arnold, ‘street casting’ to find boozy, wild teenagers where they hang out. In an interview Lane said that she trusted Andrea for her ‘good energy’, and transferred her belongings into Andrea’s car. Within a week she not only had her first acting job, but her first starring role.

The film kicks off with Lane’s character making a similar, impulsive decision. She sees a charismatic, pierced, tattooed young man of about 30 with a long, matted pony tail, and suspenders around his waist dancing around the car park of a Wal-Mart with a van-load of followers. She likes his energy and they flirt. When the man and his group are chased out of the store, he drops his phone. The girl retrieves it and returns it to him outside. His name is Jake (a great performance from Shia LaBeouf). He offers her a job selling magazine subscriptions in the Midwest. She tells him her name is Star, and Sasha Lane’s performance in the film, more than her character’s sales’ pitches, demonstrates why that name fits.

Star does not have much to lose, nor do any of the misfits in the van. When we first meet her she is foraging for food with two kids whose parents are busy line-dancing. Home seems to be a filthy bungalow that she shares with a man so spaced-out that after demanding his dinner, he is too absorbed in dancing to music to eat it. The call of the wild beckons. Star delivers the children to their furious mother and runs off – just in time to take up Jake’s tantalising offer.

This offer is subject to the approval of the no-nonsense ‘boss,’ a skinny, scantily-dressed man-eater named Krystal (Riley Keough, the granddaughter of Priscilla and Elvis Presley), who is either drunk or high on something, but nearly steals the show. Krystal shares her private motel room with a variety of young men, most often Jake, who is also her private chauffeur, training manager and star salesman. Krystal is looking for people who will work hard and have no attachments. As Krystal murmurs, ‘American Honey’ Star is hired.

For Star, who is more competitive than she realises, making Jake her own is the top priority. If she has to increase her sales to stay on board, she is willing to use her sincerity, fearlessness, and her body to do so.

The film is at its best when Jake and Star are using their wiles selling subscriptions. Jake tells Star that the client is not buying magazines, but him – and an image of themselves that he has seconds to assess. He invents stories about how taking a subscription will help his educational career and isn’t afraid to invent a dead mother for sympathy. He establishes an instant rapport with a wealthy bible-belt housewife and is a born actor, but Star objects to his lies. In one humorous scene, Star watches the spoilt teenage daughter dancing seductively through the window with her girlfriends, literally behind her mother’s back. When she ruins Jake’s masterful sales pitch by interrupting rudely, she points to the daughter as if to underscore the housewife’s hypocrisy. 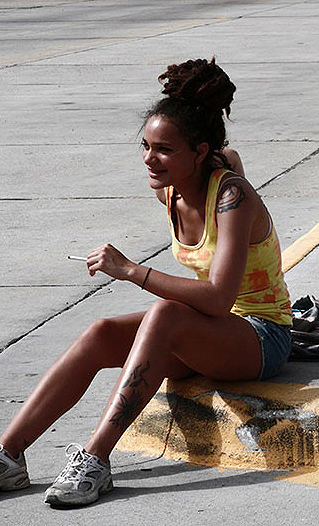 Star wants to prove she can sell on her own terms and pulls it off in three distinct, extended sequences. Star thinks nothing of going off to a barbeque with three wealthy Texan rancher owners whose moustaches as are wide as their wallets and against whom she wins a stomach-turning bet for $400 in subscriptions. Just as the rowdy cowboys are filling in the paper work, Jake’s wolf calls are heard. The party-crasher looks less like achivalric knight saving the damsel in distress than like a mad man waving a gun.

Things go better when a kind and generous truck driver tells her he actually reads magazines but has to hit the road. Undaunted, Star jumps in the passenger seat to make her successful sales pitch, leaving the truck after the sale to wade back to the group through the bloody field of a slaughterhouse. Star’s approach to creating a rapport is more instinctual and natural as we see in this touching scene.

When Krystal drops the girls off to sell to the well-paid oil workers far from home, however, Star is not above using her body for a subscription. In each scene we learn something new about Star, whom we have already observed freeing insects trapped inside rooms and relating sensitively with fellow salesperson, Pagan. Pagan is, interestedly, played by Arielle Holmes, the former homeless drug addict and the star and author of the impressive 2016 film Heaven Knows What.

In the place of story and plot there is mood, atmosphere, vitality, the excitement of young love and a wonderful medley of carefully chosen songs that, in the tradition of the best Hollywood musicals, narrate the film and interpret the action without being intrusive. The Country Music song American Honey (recorded in 2010 by the group Lady Antebellum) sung by the sales team in the van captures the ethereal, ebullient, nostalgic, yet melancholy nature of the film. As in all her films, Arnold relies on the cinematography of British DOP Robbie Ryan who beautifully drops his subjects into the vast landscape without losing them in it. The sheer energy of the film and Arnold’s spontaneous style will get you through the meandering bits that bring the running time to nearly three hours.