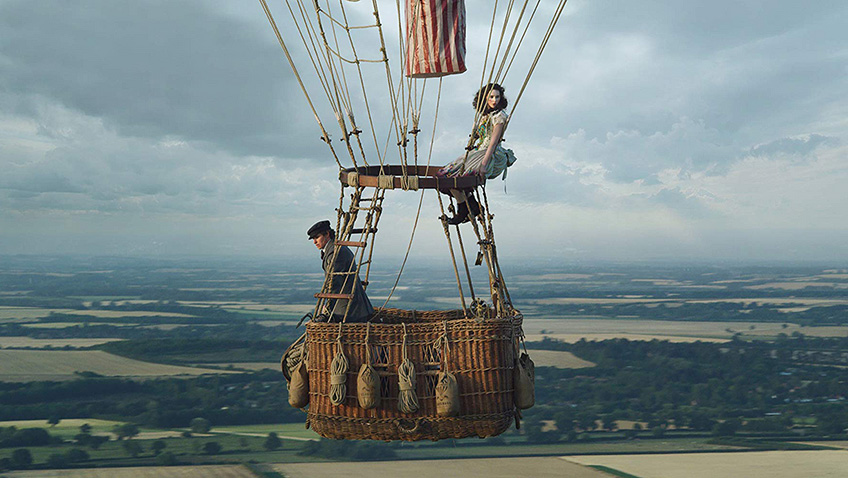 What’s wrong with this picture? Director Tom Harper (Wild Rose, BBC’s War & Peace) reunites Eddie Redmayne and Felicity Jones from the Stephen Hawking biopic, The Theory of Everything, in a period feature about an historic hot-air balloon flight that broke a world record – almost at the cost of its pilots’ lives. Redmayne (who won an Oscar for ‘The Theory of Everything‘) plays real life London meteorologist James Glaisher. Jones plays the daredevil balloon pilot Amelia Wren hired to pilot Glaisher’s balloon, leaving him free to conduct scientific experiments. Though Wren somersaults onto the launchpad like an acrobat in front of the adoring crowd, she is haunted by a dark secret. 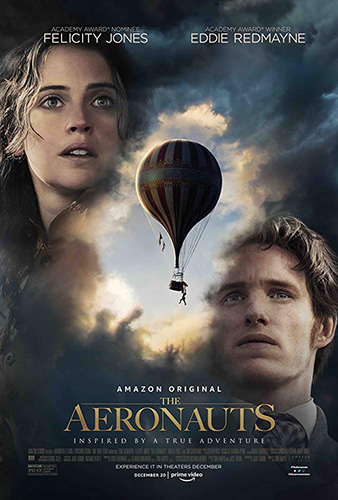 Nothing is wrong with this picture you might say. It sounds both quite jolly and intriguing. There is the added benefit of sneaking in a badly needed English history lesson for few of us have heard of Londoner James Glaisher.

Although the book that inspired the film, biographer Richard Holmes’ Falling Upwards: How We Took to the Air

, tells a similar story, it has a different co-star. Glaisher made the historic balloon flight of 5 September 1862 with his regular co-pilot, Henry Tracy Coxwell, a celebrated aeronaut and balloon enthusiast who is credited with saving Glaisher’s life on that fateful day. This might be the shape of things to come: a man is written out of history so a woman can take the credit.

The conspicuously named Amelia (as in Earhart perhaps), Wren (a bird, and the Women’s WWII Navy squadron), represents the Victoria woman breaking free. But swapping Henry for Amelia isn’t entirely gender rebalancing and political correctness gone mad. There were such flamboyant female aeronauts from the 18th century, and there was even a female playwright writing about balloonist couples. Elizabeth Simpson Inchbald’s first play, produced in 1784, was a farce entitled Mogul Tale: or the Descent of the Balloon in which an English couple get blown off course to India.

It seems that Wren was loosely modelled after Marie Madeleine-Sophie Armant, credited with being the first professional female balloonist. She was married to Jean-Pierre Blanchard who made the first aerial crossing of the English Channel, but he predeceased her. Harper spends so much time on the tragic fate of Amelia’s fictitious husband, Pierre Rennes, that the scientific discoveries which emerged from the perilous flight are summarised in a single expository line at the end.

Nor was Glaisher the ridiculed underdog of the Royal Society. When he presents his theories and asks for funding for the expedition, the crowd of bearded old men shout, ‘We are scientists, not fortune tellers’ mocking him and storming out. While it’s true that Glaisher was way ahead of his time, when he made his funding plea, he was already an established Fellow of the Royal Society, and twelve years before, he founded the Meteorological Society.

In the film we see him in flashback at the Greenwich Observatory, though what he is doing there is never clear. Glaisher was the Superintendent of the Department of Meteorology and Magnetism at the Observatory for thirty-four years.

Despite the distortion of history, there are moments of delight to be had, thanks more to Wren than to Glaisher, who has the personality of a turnip. Ironically, Wren’s character is more developed. Wearing a clown outfit, she entertains the public with acrobatic stunts around the skirt of the balloon while James frets and fiddles in the basket. On cue she is handed an adorable puppy which she pretends to be taking along. Just after take-off she throws the poor animal out of the balloon to gasps of horror. Lo and behold, a little doggie parachute carries the pup safely to the ground. A carrier pigeon that Glaisher takes along is not so lucky and freezes to death. 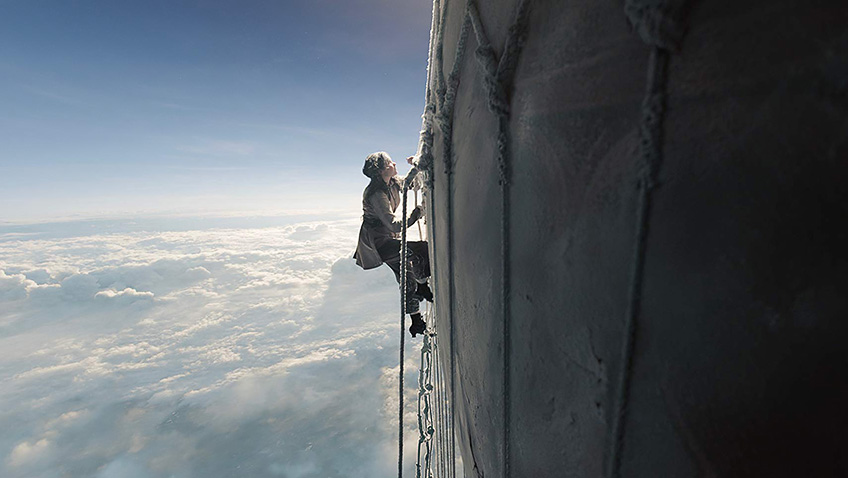 Felicity Jones in The Aeronauts

This launch scene sets up a dichotomy between Wren, who talks about poetry and the wonder of the stars, and Glaisher, who is accused of being too wrapped up in his science to appreciate the beauty of nature. This tension is a bit egged, as it is the practical and, ironically, safety-minded Amelia who takes the warm clothing (although ridiculously, neither has a pair of gloves) and who has her technical wits about her when panic strikes. That said, Redmayne’s Glaisher might be a star gazer, but does not seem to derive joy from anything. Still, the filmmakers use admirable restraint in keeping the relationship between these two characters strictly platonic, particularly as Glaisher is married, and Amelia cannot let go of her late husband.

The reason to see the film comes about 90 minutes in when Glaisher, affected by oxygen deprivation and the cold as they reach the 35,000 feet mark (they will reach 37,000, a world record), insists on going higher despite Wren’s warning. When he passes out, it is up to her to save them as the balloon is still rising, even without the propane gas being lit. Normally, the remedy is to pull down on the cord which connects the parachute valve on the top of the balloon envelope (or outer shell), but due to the ice, it does not work.

There is only one option left. Wren must open the parachute valve (letting out the hot air that causes the balloon to rise) manually. After reviving Glaisher and begging him not to fall asleep, she scales the envelope of the enormous balloon by the ropes tied like ladders flat against the fabric. Inch by inch she climbs into the void as those vertiginous viewers who have not shut their eyes, will be feeling queasy. Her hands bloody, her body bruised, she lands on the top, only to find the valve will not open.

At this point, the crowd and the aeronauts’ backers and families are long gone from the launch site, although at the end of the film we realise that the entire journey – which seems to have lasted an entire day — only lasted 73 minutes.

Anne Reid and Tom Courtenay inject warmth and spontaneity as Glaisher’s parents, with dad’s dementia not severe enough to deprive him of fear and then fatherly pride. But aside from this pair, the rest of the supporting cast are drowned in the film’s clichés, not all of which are limited to the script. Amelia’s staunch sister Antonia (Phoebe Fox) sits around on overstuffed furniture uttering lines like, ‘You could have the most wonderful life in society’, just to let us know that ballooning was not a typical vocation for a Victorian upper class woman.