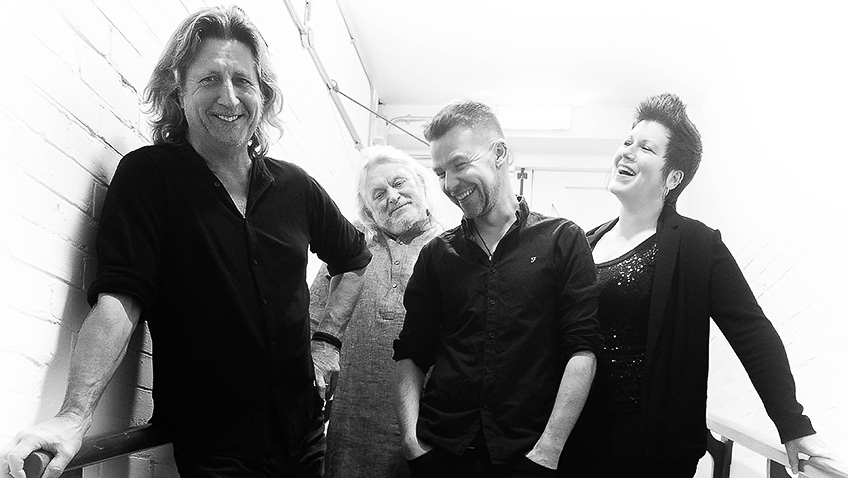 Guitars, mandocello, ukulele, mandolin and fiddle get swapped and played with joyful expertise

For over a quarter of a century, the passionate, brilliant musicianship of two Devonian dudes, Steve Knightley and Phil Beer, has been thrilling audiences far and wide. They’ve even filled the Albert Hall five times.

Since 2004, their singing, song-writing and multi-instrumental mastery has been further enriched by the voice and double bass of Miranda Sykes, and the Show of Hands folk/roots duo frequently became a trio. When Miranda sings Sea Glass and the new album song Make the Right Noises she certainly has the audience making the right noises. Her voice captivates both in solos or in superb harmony blend with Steve and Phil; and what wonders her dancing fingers perform as she bows and plucks those double bass strings to their delicious, growly, thrummy, drony, chocolaty depths. The cheers are well deserved.

As of this year, further exciting varieties of duo, trio, and even quartet arrangements are on offer, because now they are four! Talented percussionist and Irish Yorkshireman, Cormac Byrne, is also in the mix both on latest album Battlefield Dance Floor and onstage. Cormac rejects Steve and Phil’s suggestion he adopt the Show of Hands look as he’s not so keen on that beardy, long haired, “I’ve let myself go” style. Instead he opts for a slim, boy-band-shiny look with a sunny smile that refuses ever to leave his face. He doesn’t sing, but Cormac is constantly abuzz on cajon, cymbals and shakers, but predominantly driving out tapping, pounding rhythms on the bodhran. (It might be nice, though, to ring the changes and have the bodhran played unplugged once in a while.) The fine chemistry between the four makes for helpings of humorous banter and friendly ribbing, with mentions of potatoes, scones, jam and cream inevitably on the cards.

As ever, guitars, mandocello, ukulele, mandolin and fiddle get swapped and played with joyful expertise and deceptive ease. New compositions rub alongside old favourites in a constant, generous flow that has narratives, social comment, ballads, solo passages and instrumentals weave through folk, country and R&B, with added hints of Indian (in the Partition song The Train) and an odd reggae splash in Dreckley (the Cornish word for manana). A cover of Cohen’s First We Take Manhattan and Steve’s own Lost are other new album numbers that add fresh zest to a programme that simply has to feature much loved sing-alongs like Cousin Jack, Country Life, or the accelerated gallop of fluid fiddle twiddle and pounding bodhran in The Galway Farmer.

Polished, professional stagecraft is key to this gig, too. While light shows of colour swirl glory through drifting smoke, even appearing in stripes of orange and green for an Irish song, beautiful use is made of spotlights and dark silhouettes, creating an exciting, inviting atmosphere. The sound system, complete with echoes, is polished and sophisticated, too. This all brings, of course, a less raw, traditional folk feel, and loses, perhaps, some of the warm charm and magic of a more basic, simple folk acoustic, yet it’s all so very good that devoted fans and delighted newcomers alike are instantly on their feet, clamouring for more. The band obliges of course.

After Durham, Swansea and Bath, Show of Hands will appear in Yeovil, Shrewsbury, Norwich, Dorking, Salisbury, Portsmouth, St Albans, London, Bexhill, Birmingham, Cheltenham, Lincoln, Leicester and Exmouth. The inexhaustible artists each have individual tours coming up in 2020 as well.