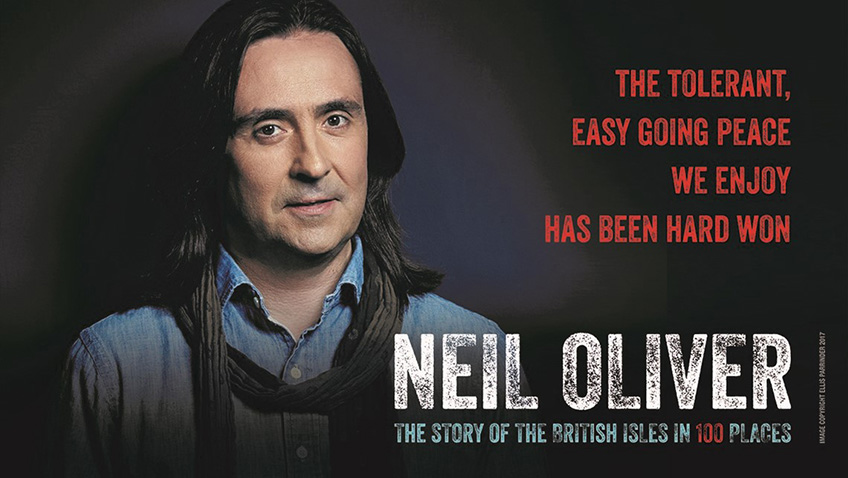 A long-haired Scot paces the stage in a denim shirt and neck scarf, keenly engaging his audience for over two hours. But banish thoughts of Billy Connelly! Instead, go for quietly spoken, relaxed and Very Coastal. It’s Neil Oliver, passionate historian, archaeologist, writer and TV presenter with ‘The Story of the British Isles in 100 Places

’ – coincidentally, the title of the book he’s promoting and signing. A happy ukulele takes us Somewhere Over the Rainbow, a series of calendar scenes, complete with starling murmuration at sunset, delights us, and then we’re off!

Armed with his clicker, the Scot zooms us here, there and everywhere around a projected map, with photos interspersed, on a quick-paced trek, back, forth, up, down and across these British Isles that Oliver says he loves far more than all other places on the planet, a place steeped in rich history. And, for good or ill, as hero and as villain, Britain has had massive influence over the entire world – fuelling the slave trade extensively, for instance, before working to ban it. It’s an exhausting yet fascinating whistle-stop tour through time, place and perspective.

With 100 locations to cover there’s not even time to sip water as we rattle from Number One Happisburgh, which is not quite yet in the sea, and where the oldest hominid footprints outside Africa were discovered in 2013, to wildlife-rich Number 100, Dungeness. Via stories, snippets and personal experiences, we visit places that once had huge importance and influence at a different time, like the mighty Ness of Brodgar on Orkney, or a Morecambe Bay frequented by Coco Chanel and Laurence Olivier, and we call at places that suffered unique tragedies – the RNLI lifeboat men at Penlee or US forces at Slapton Sands. As we travel from ancient civilisations to modern, from battlefields to castles and cathedrals, we take in astounding Argentinian cave paintings, the Spanish Armada at the Giant’s Causeway, Lincoln’s Magna Carta, the men of Harlech, the Civil War, Iron Bridge and the Industrial Revolution, the bold 3-legged symbol of the Isle of Man, Whitby and James Cook, Burnham Thorpe and Nelson, Hull and Wilburforce, Glastonbury, wartime Alderney, the fossils at Lyme, the tin mines of Cornwall and beautiful places like Iona that feed the soul. Shakespeare turns up, as do Robert the Bruce, Vikings, Romans, heaps of kings and queens, Rutherford, Churchill, Robert Burns (with hastily recited poetry) and… you name it!

Full of enthusiasm and eloquence, Oliver is a man on a mission, a mission to fire up and inspire us into sharing his love, his passion, his interest, his concerns. With time (just about) for humour along the way, he gently expresses his earnest feelings, worries and opinions, keen that we realise how history and geography are continually moving and reshaping, and also shaping us. Whatever we have or know or do today has been shaped by what went before, by specific events, both natural and manmade, and by specific individuals, while the bed of the future will be only as comfortable as we prepare it today. For how suddenly things can change: peace can turn to war in the blink of an eye.

Oliver fell in love with history when a child as his family and the Cameron Clan at the battle of Culloden slotted him into place as part of ongoing history himself. He loves archaeology best, though, as it gives him the excitement and privilege of physically touching history and breathing it in. Via fascinating links, we and our families, too, are woven into the tapestry of history on a planet where mankind sees itself as the pinnacle species of earth’s creations and a permanent one, yet is really but a tiny, albeit interesting, dot along the timeline.

Like Mr O’s lovely locks, this fascinating double-dose documentary is quite long, but splendidly presented!