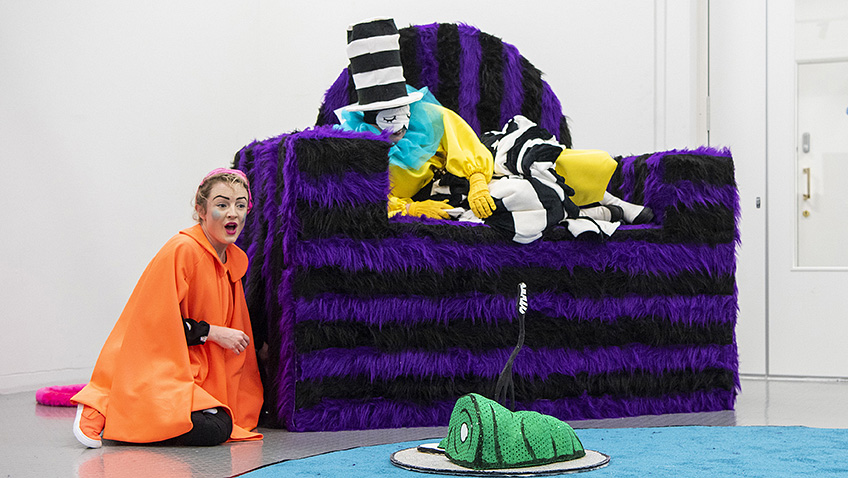 Opera North’s new opera, a bite-size opera, is sensational. Green Eggs and Ham is so splendid it totally enthralls little people and grown-ups alike. Dr. Seuss’ comic tale may be just 50 words long, yet around this Opera North has crafted an intense, engaging drama with fabulously rich, original music. And what a richness of instruments, too: double bass, keyboard, flute, two clarinets, bassoon, French horn, trumpet and masses of percussion, including marimba, xylophone and glockenspiel. And each gets a chance to shine.

The company stints on nothing. Composer Robert Kapilow’s extensive score is rich, varied, perky and exciting, played, into the bargain, by nine magnificent musicians with utmost relish. The words and story are particularly simple, yet the orchestration, and the drama that’s enacted, spoken and sung by two spellbinding sopranos, are deliciously elaborate and engaging. Add to that beautiful props and costumes and it’s no wonder everyone sits riveted throughout, wreathed in smiles. An outsized armchair greets the audience as they settle on their cushions and seats – a big, hairy, stripy armchair with storage space beneath. On the floor is a round, blue rug. Enter soprano Susie Buckle in the woolly hat, bright orange cape and spotty stockings of Sam-I-am, and soprano Gabriella Cassidy in striking tall, stripy hat, yellow pantaloons and ruff, who sits in the outsized armchair, reading an outsized newspaper. 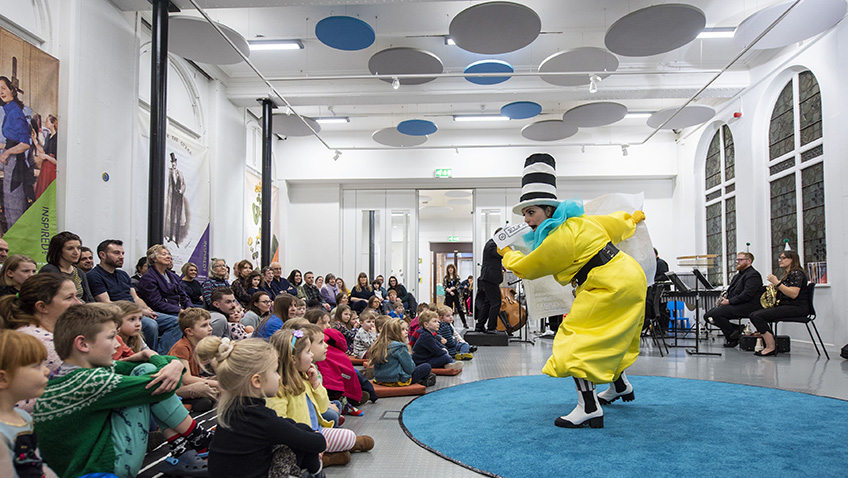 Before the drama itself gets underway, lively, friendly Susie skilfully builds a fabulous rapport and happy mood, guiding the children through interactive talk about the story, their merriment doubly enhanced when both volunteers onstage, incredibly, turn out to be called Eli. Chatty Eli from Rotherham thinks olives are disgusting: taller Eli likes them. Between them they help explain the message in the book: you must always try something first before you judge it, while quiet persuasion works better than shouting and pestering when you’re hoping to get someone to try something new. Introducing themselves and their instruments in amusing, informative ways, the conductor and nine superb players played popular tunes like Paw Patrol, Octonauts, Star Wars and Wallace and Gromit. Then everyone considered how happy/sad, angry/gentle moods can be created by music and, once they’d tried doing impossible drum-rolls on their legs, the overture for Green Eggs and Ham began. The polished, expressive acting, mime and interactions of the two sopranos is outstanding, a great deal taking place during instrumental passages. The words from the book, wonderfully crafted and full of dramatic repetition and build-up, are delivered with massively engaging impact via Gabriella’s glorious singing and Susie’s narration and singing. As bright plates of eggs and ham travel the stage with the occasional pink fox-tale, mouse or bubbles, the singers and musicians perform to engage, thrill and amaze just as in a full-scale opera.

Even for those who don’t like Dr. Seuss, though most do, such all-round excellence might well inspire tears of joy! If everyone in the audience doesn’t end up loving music, instruments, rhymes, stories and singing forever then I’ll eat that tall, stripy hat!

Green Eggs and Ham will also be served up in Alnwick, Carnforth, Hexham, Barnard Castle, Newcastle and Salford Quays as well as in various primary school classrooms.