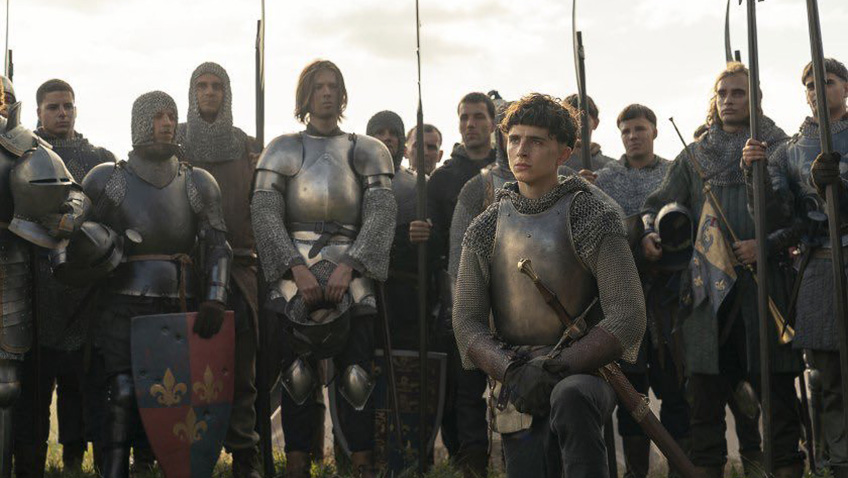 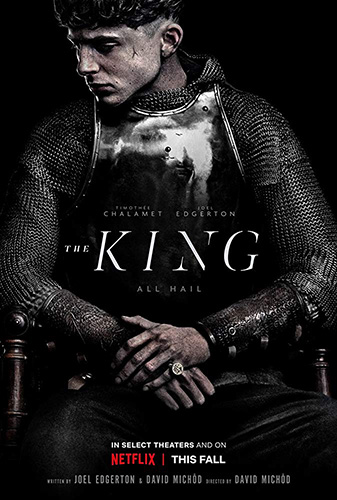 The King (Netflix). Laurence Olivier’s Henry V film was World War 2 propaganda, a morale booster, released at the same time as D Day in 1944. Kenneth Branagh’s Henry V film was anti-war and released at the time of the Falkland war in 1989. Orson Welles’s Chimes at Midnight, released in 1967, concentrated on the relationship between the young prince and Falstaff as depicted in Shakespeare’s Henry IV history plays. David Michod’s The King has nothing to with Shakespeare.

Henry was 28 when he fought the Battle of Agincourt, one of the greatest English battle victories. Timothée Chalamet is but 23. The English were outnumbered by three to one. It was a blood bath for the French. 6,000 of them died. Men in Armour hacking each other to death in the mud proves to be the high spot of a disappointing film.

The real Henry was a soldier and a statesman, a war-monger, obsessed with conquering France. Chalamet’s Henry is a pacifist who remains a teenager, young, speculative and vulnerable, full of self-doubt and surprisingly lacking in energy. He never grows up. It’s difficult to imagine him rousing an army.

Falstaff (Joel Edgerton), a war-weary militarist on whom Henry relies, is far removed from Shakespeare’s great comic creation and much nearer to the real Sir John Fastolf, a distinguished soldier who fought bravely at Agincourt.

Monty Python’s Flying Circus Series 1 (NETWORK). Graham Chapman, John Cleese, Eric Idle, Terry Jones, Michael Palin and Terry Gilliam’s animation made a major contribution to comedy from 1969 to 1974. Childish and adult, whimsical and savage, innovative and subversive, the actor-writers addressed the camera directly. Sketches were abandoned midstream and there were no punch lines. It was, physically and verbally, totally, absurdly surreal and silly. Philosophers wrestle (literally) to decide if God exists. A women‘s group recreate the battle of Pearl Harbour with handbags. The dead parrot sketch and the lumberjack song are part of our culture. Series 2, 3 and 4 will be released in 2020. Wink-wink, nudge-nudge, say no more.

Pavarotti (Universal). Luciano Pavarotti took opera to the people. Ron Howard’s documentary is a tribute to the greatest popular singer since Caruso. He began by filling opera houses and concert halls (his sole prop, a handkerchief) and went on to conquer parks and stadiums with rock stars, bringing classical opera and pop together, and playing to an ever growing global audience of millions The film, totally uncritical, concentrates on his artistry, his flamboyant personality, his charm, his passion, his generosity, his charity and of course his High Cs. There are soaring emotional excerpts from La Boheme, Tosca and Pagliacci. The high spot is The Three Tenors, Placido Domingo José Carreras and Pavarotti, in friendly rivalry upstaging each other, singing Nessun Dorma from Turandot. It’s difficult to fight back the tears.

Red Heat (StudioCanal) is a 1988 cult action thriller, a stereotypical comic buddy movie with a bus chasing, bus smashing climax. Russian military policeman (Arnold Schwarzenegger, stolid, thoroughly decent, humourless) and American cop (wisecracking Jim Belushi) join forces to track down a Georgian drug dealer (Ed O’Ross) who has escaped to the United States and is in Chicago awaiting extradition. The Russians, surprisingly, allowed Walter Hill to film in Moscow’s Red Square. Things were different then. It was the era of Gorbachev and glasnost.

Hair (BFI). The highly influential Broadway musical opened in London on 26 July 1968, the day after the abolition of theatre censorship. (Censorship began in 1737.) Audience who came for the nudity were bitterly disappointed. The lighting was so dark you couldn’t tell the boys from the girls. Milos Forman’s film, with choreography by Twyla Tharp and a radically different script made 12-years later didn’t do well at the box office but it is infinitely superior to the stage show. A likeable innocent country lad (John Savage), on his way to join the army and fight in Vietnam, comes to New York and is taken up by a group drug-fuelled, free-loving, draft-dodging hippies (led by the charismatic Treat Williams). They have a frenetic time in Central Park and gate crash an upper-crust party.