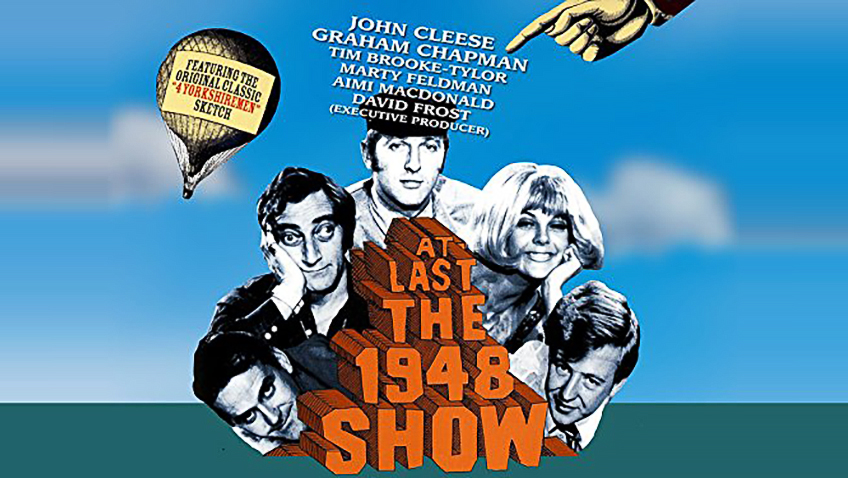 At Last The 1948 Show (BFI) Tom Brooke-Taylor, Graham Chapman, John Cleese, Marty Feldman and the lovely Aimi MacDonald are still verbally and physically very funny. The scripts, aired in 1967, are wonderfully silly: a wound-up mechanical visitor visits a patient in a hospital; art expert smashing priceless antique; neurotic doctors and psychiatrists; plainclothes policemen in drag; four Yorkshire farmers discussing which of them had the worst childhood; a thief in a library being chased by police and nobody allowed to make any noise; a secret service interview; an accident prone man destroys everything in an insurance manager’s office; a one-man wrestler; a guided tour interrupts a live TV drama; rowdy football fans watching a ballet performance boo and cheer; old men dying in a club; news and newscasters; a meek bouncer is bounced; a visit to a bookshop; a train driver apologises for driving a train into a cathedral’s nave.

Do Not Adjust Your Set (BFI). Michael Palin, Terry Jones, Eric Idle, David Jason and Denise Coffey plus the bizarre art school Jazz anarchists Bonzo Dog Doo-Dah Ban are more childish Aired in 1967-69 the freewheeling series, surreal, totally whacky, very physical, and very silly, was in fact aimed at children but grown-ups watched it too. The targets include bank managers, civil servants, doctors, psychiatrists, TV chefs, newscasters, city gents and secret servicemen. There is a traffic warden awarding honours to a row of pay machines, a lesson on how to eat in a restaurant, an interview with an invisible man, an orchestra who orchestrate their sneezes and coughs, and a sedan chair treated as if it were a car. High spots include Terry Gilliam’s brilliant graphics and the long running series, Captain Fantastic, a spoof silent film with Jason as a detective pursuing Coffey as a villain. The disc includes interviews with Cleese, Palin and Humphrey Barclay.

We the Animals (Eureka). Jeremiah Zagar, in his narrative feature debut, draws on his documentary experience to direct a sensitive and impressionistic portrait of childhood and brotherhood, as seen through a child’s eyes, full of idyllic poetry and magic realism Three brothers, half-white, half-Puerto-Rican, on the cusp of puberty, observe and react to their impoverished dysfunctional parents who when they are not making love are always fighting. The youngest (Evan Rosado) keeps a diary which is animated and one of this impressive and dream-like film’s most striking features. The boys, non-professional actors, often on their own, are amazing, remarkably authentic and intimate. They have been well coached and clearly have a professional future.

Woman at War (Kona fer í stríð) (Picture House) is an Icelandic film about global warming and climate change. A middle-aged choir director, who is also a Green activist (Halldóra Geirharðsdóttir), blows up an electricity pylon. It’s an act of economical sabotage against the multinational companies and a government in league with China and bent on destroying the environment. She is pursued by planes and drones as she flees across a desolate forbidding landscape. A striking feature of Benedikt Erlingsson’s film is that she is accompanied everywhere she goes by a 3-piece band and 3 Ukrainian singers in traditional costume. They represent her inner demons. She is torn between activism and motherhood. She wants to adopt a 4-year-old Ukrainian orphan girl.