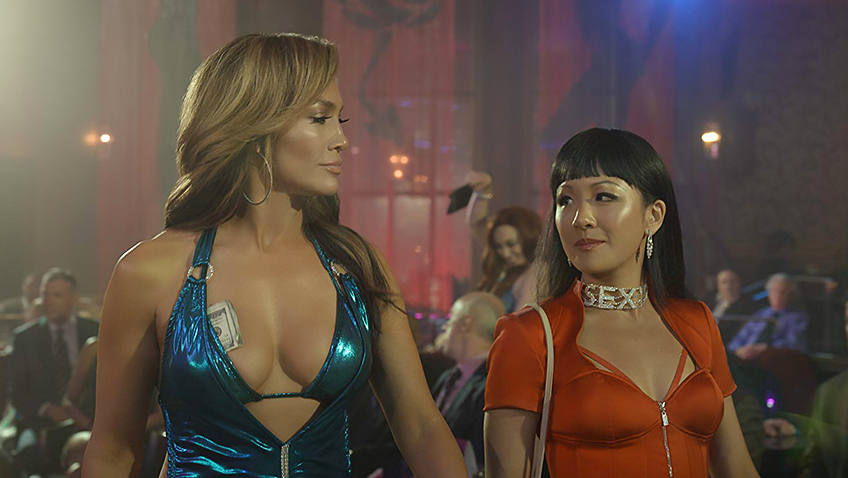 , written and directed by Lorene Scafaria is the female response to Martin Scorsese’s The Wolf of Wall Street; not just in subject matter, but in style and in her wonderful use of music, too. That the entire movie features women wearing as little and as tightly fitted as possible as befits their trade, can only enhance its appeal to a wide audience. And as it based on Jessica Pressler’s 2015 New York Magazine article, The Hustlers at Scores, it is authentic rather than exploitative. Though this is not a documentary, Scafaria is not after titillation. She wants us to reassess who is calling the shots when it comes to the objectification and exploitation of women.

The film is structured as a flashback from 2014. A journalist named Elizabeth (Julia Stiles, modelled after Pressler) is interviewing an uncomfortable woman, Dorothy (Constance Wu, modelled after Roselyn Keo), whose ‘stage’ name is Destiny. Elizabeth is writing an article on Ramona Vega (Jennifer Lopez, modelled after Samantha Foxx) the Queen of Moves (a high-flyers’ gentlemen’s club, modelled after Scores and Hustler’s). Ramona was prosecuted in a high profile 2014 court case in which Dorothy/Roselyn, an unreliable witness in the film, turned state’s witness.

Cut to 2007 – a great year for Destiny and Ramona. ‘I made more that year than a brain surgeon’, Destiny tells Elizabeth. But first she has to meet Ramona. Destiny is a new girl at Moves and will not be able to support her grandmother unless she learns the ropes, or rather poles. This naïve, clean-speaking, altruistic image differs significantly from that of the real character as profiled in the article. 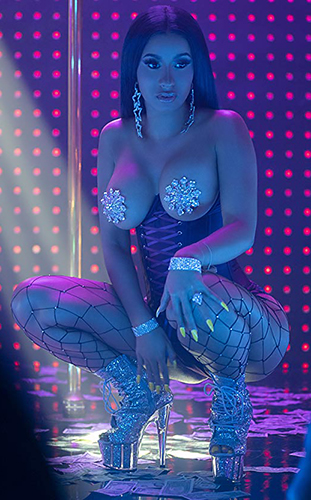 Cardi B in Hustlers

The film boasts the presence of the rapper Cardi B in the cast, but she appears only briefly when she critiques Destiny’s lap dancing technique. Cardi B, the sole bona fide former stripper in the cast, demonstrates how it is done – but that’s not the kind of movie it is. The sexual act is strictly verboten. Ramona’s girls do not do drugs or drink (at least not on the job) on the job and they object to the label strippers.

While most of the girls are in their early 20s, the better to please the clients, Ramona is in her thirties (Lopez, although you will not believe it, is 51). If Ramona’s clients did not mind, we shouldn’t either as Lopez transforms herself into the real deal. Twisting around the pole, lying perpendicular to it or sliding down it upside down in a sexy sequin costume and landing in a split, no one is thinking about her age.

We share Destiny’s wide-eyed amazement as Ramona leaves the room spellbound. Ramona has sex appeal and charisma and knows how to set the male audience on fire so that they shower her with dollar bills. But this is the small change.

One of the benefits of having a new girl as a character is that Scafaria can explain how the club works without expository writing. We learn that the girls do not receive money for dancing, just the tips that we have seen being stuffed in the girl’s skimpy costumes or thrown on the stage. We watch Destiny’s meagre take being reduced by the huge management commissions. The big money is in the private, backroom antics, and this is where Ramona needs the younger dancers she cultivates. 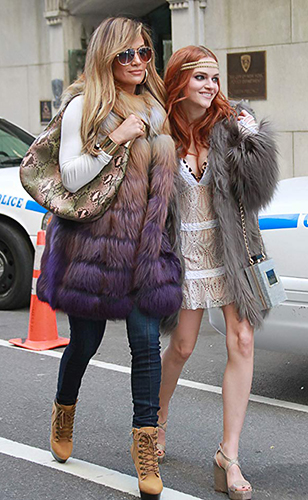 Up on the roof where Destiny finds Ramona having a cigarette break wrapped in a thick mink coat, Destiny appeals for help. Ramona opens her fur coat and literally takes her under her wing as if she were an Emperor Penguin warming a newly hatched egg. As in The Big Short, Ramona explains the three kinds of clients (and the film illustrates them). The way to make a living is by appealing to the third type, the CEOs and hedge fund managers who think nothing about spending thousands for a good time. Soon Ramona and Destiny are doing just that, stimulating multi-millionaires by simulating lesbian sex and via other various creative acts. We then watch the spending sprees – designer bags and clothes, a more luxurious apartment and of course, more money for Destiny’s gran.

All this changes on September 29, 2008. The crash depletes the clubs of the more profitable clientele and puts the girls out of business. Ramona and Destiny lose contact. By 2011, Destiny’s boyfriend has abandoned her and their baby daughter, and she lacks the experience and skills for straight jobs. Desperate, Destiny resorts to stripping. It is then that Destiny spots Ramona, glamorous as ever. Ramona, with her matchless phone book, has been out ‘fishing’ – bringing clients into the club.

While Destiny is complaining to Elizabeth about Ramona’s lack of entrepreneurial skills, Ramona has a ‘low risk’ idea. She proposes a plan, involving Mercedes (Keke Palmer) and Annabelle (Lili Reinhart) to get men drunk at a bar, bring them to Moves and charge their credit cards to the max. The man will be too ashamed or hung over to remember what happened or to complain. The girls will remind them that they had a great time and got their money’s worth. Cut to a happy Christmas celebration with expensive gifts and a new luxury penthouse for Ramona and a new flat for Destiny.

Regrettably, Scafaria leaves it for us to draw the parallels with the Harvey Weinstein cases in which evidence of coercion is compromised when the ‘victims’ all wanted something – career, stardom, publicity etc, from Weinstein. The real-life Samantha maintains that the men willingly paid to get ‘f***ed up’ on drugs with the women. 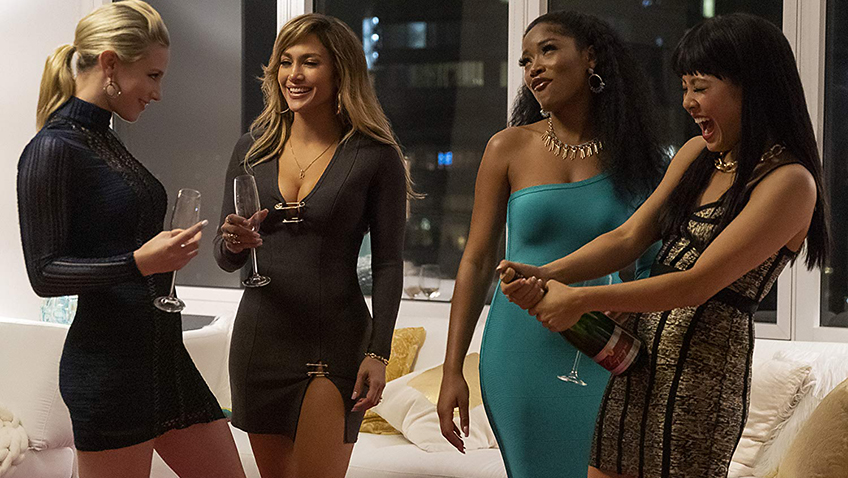 When their scam is copied by other girls, Ramona decides to go independent with a plan to administer a kind of male date rape drug (ketamine and MDMA) so that the girls can max out the cards before the men suffer memory loss. They need to fork out money on hotels and soon realise it is a numbers game as not all the men pan out. But as the girls prove unreliable, and the men prove harder to handle, Ramona lowers her standards. Against Dorothy’s advice, she brings in a prostitute with drink and drug problems.

Though there is no one to root for in this sordid tale and its entertainment value diminishes with repetition, the story does establish that the women who exploit hedge fund managers are every bit their equal when it comes to screwing the nation. If the male-led financial crash gives the girls a moral justification, it does not make them likeable, however. In the case of Constance Wu, it does not make her credible either. Described in the article as having ‘the kind of body that…could get a girl in trouble’, notably ‘overtly sexy shape with the sort of waist-to-hip ratio scientists have concluded affects men like a drug,’ in every sense Wu’s character is the opposite of this description.