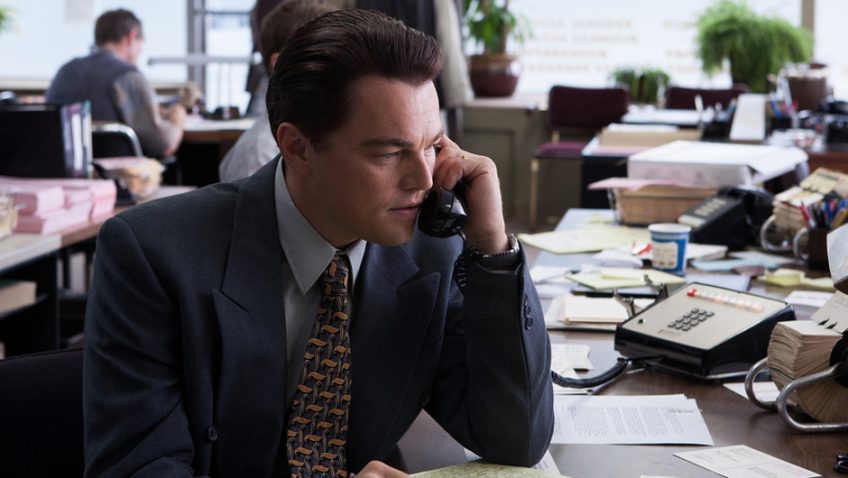 As far as movie collaborations go, that of Director Martin Scorsese and his male muse Leonardo DiCaprio (Gangs of New York, The Aviator, The Departed, Shutter Island) is right up there with the best of them.

Their fifth film together, The Wolf of Wall Street

, based on former stock broker Jordan Belfort’s memoir, is a study in excess from its subject matter, to its 18/R rating and its three-hour length.

If Scorsese was dreaming of merging form and content with a cinematic study of decadence, opulence and self-obsessed greed, he and DiCaprio have succeeded.

Being a New Yorker and a cinema historian, Scorsese might have found inspiration, too, from the 1929 Wolf on Wall Street, directed by New York actor and stock broker-turned-Director, Roland Lee. What’s in it for the viewer, however, is less clear.

Belfort, the son of two accountants from the Bronx (Rob Reiner and Christine Ebersole), was hooked the minute he stepped onto a Wall Street trading floor. In what is arguably the best sequence of the film, Jordan catches the discerning eye of his boss, Mark Hanna (another great performance from Matthew McConaughey, painfully thin from dieting for Dallas Buyers Club), who invites him to a liquid lunch after cocaine hors d’oeuvres.

‘Are you able to do drugs and still do your job?’ the naïve trainee asks.  When Hanna responds, ‘how the F**K else would you do this job?’ he is not joking. This is the first of some 500 uses of the ‘F’ word and Hanna is the first of a string of colourful characters who cross paths with Belfort during the familiar and predictable trajectory of his rise and fall. 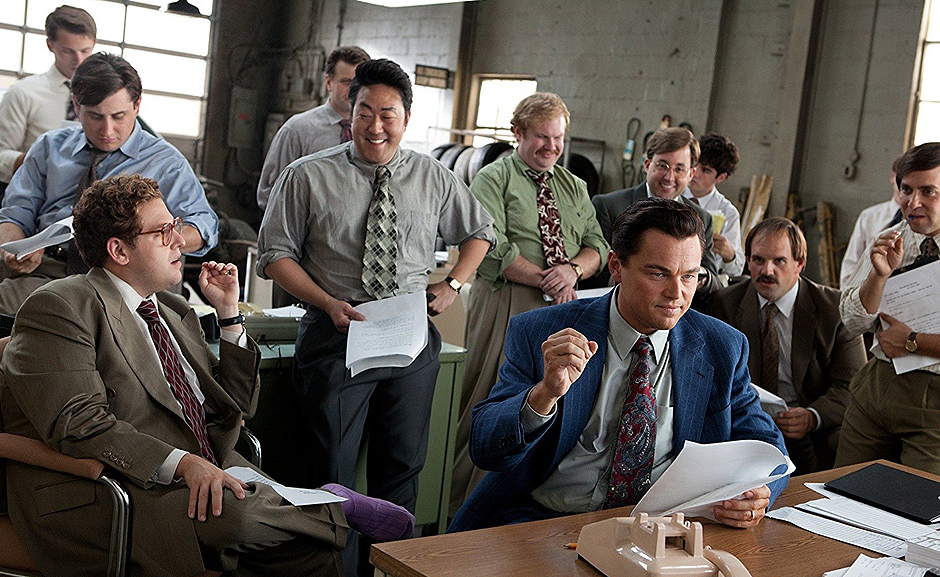 Or falls. The year is 1987, and no sooner is Belfort making enough to marry his devoted girlfriend (Cristin Milioti) then the market crashes and he is laid off. He finds a job on Long Island with a sleazy Penny Stock company and impresses his boss with a sales pitch.

Belfort is a fast learner and hooks up with his neighbour, Donnie Azoff (Jonah Hill), to form what becomes Stratton Oakmont. Their boiler room expands under Belfort’s (“I want you to deal with your problems by becoming rich”) motivational leadership.

Belfort and Azoff also deal with getting rich by getting laid (there are big office parties with naked girls running around) and stoned, preferably on Quaaludes.

At one party, Belfont meets Naomi Lapaglia (a terrific Margot Robbie) a curvaceous, pretty, high-maintenance girl whom he marries after divorcing his long suffering wife.  When the FBI and SEC begin investigating Belfort questionable business practices, he opens a Swiss Bank account under the name of Naomi’s Aunt Emma (Joanna Lumley).  Young women with cash strapped to their bodies travel to Switzerland in this money laundering scam.

Leonardo DiCaprio and Margot Robbie in The Wolf of Wall Street

DiCaprio’s Hyde Park bench scene with Lumley is a treat (despite the age gap, both think the other is coming on to them); Jean Dujardin (The Artist) is marvellously sleazy as the Swiss banker; while a perfect scene on Belfont’s yacht where he tries to bribe FBI agent Patrick Denham (Kyle Chandler), is a tour de force in acting and direction.

Despite the talent on display, the repetitive scenes of debauchery and excess deliver diminishing returns. Belfort crashes his luxury yacht in a storm (it really happened) and crashes his Lamborghini driving semi-comatose on drugs.  If these scenes add anything to the film, their length certainly doesn’t.  Scorsese dedicates five minutes to Belfort crawling from the house to his car.

DiCaprio gives us a master class in physical acting, but after seeing him in Catch Me if You Can, Shutter Island, Django Unchained and the eponymous hero in The Great Gatsby, a performance so astonishing that it saved an otherwise misjudged adaptation, he doesn’t need to prove his virtuosity.

Leonardo DiCaprio in The Wolf of Wall Street

As a portrait of both a character and an opportunistic business, The Wolf of Wall Street

fails to dig beneath the surface of either, or reveal anything we didn’t already know. In Terence Winter’s (the creator of Boardwalk Empire) screenplay, the characters remain one-dimensional and incapable of engaging our sympathies.

This might be a black comedy, but those who have lost their homes or savings to Belfort and similar swindlers will find nothing to laugh about.