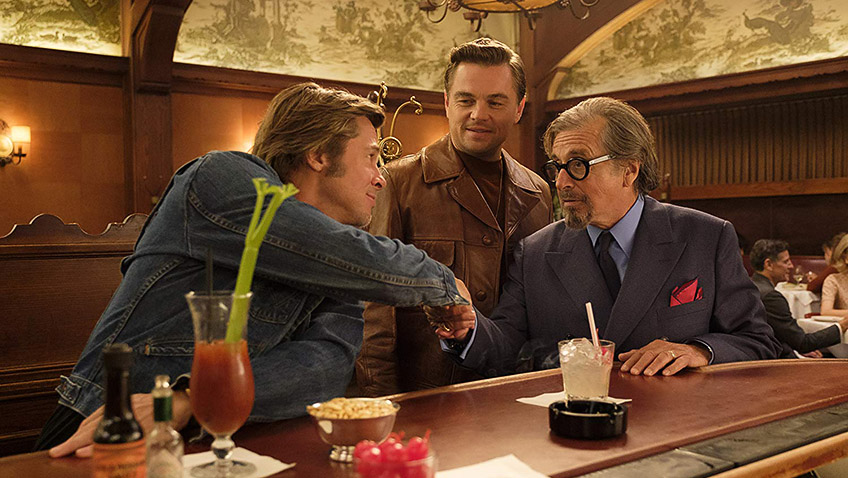 All of Quentin Tarantino’s films are, in their subject matter, cinematic style and references, love letters to cinema. Once Upon a Time in Hollywood

, with its direct reference to the title of Sergio Leone’s 1968 epic Spaghetti Western Once Upon a Time in the West, is both his most specific and arguably his best film since Pulp Fiction. In Inglourious Basterds (WWII) and Django Unchained (Southern slavery) Tarantino demonstrated that he was interested not only in stories and myth, but in history. It was chronicler of 1960’s Hollywood, Joan Didion, who said, ‘Many people I know in Los Angeles believe that the Sixties ended abruptly on August 9, 1969. This fateful day (Tarantino was 6) at director Roman Polanski’s rented house is the climax of the film where the lives of the central characters come together for a mind-blowing, masterful lesson in revisionist history that gives the film its 18 certificate.

Tarantino’s ninth film contrasts the self-destructive, co-dependent friendship of fictional showbiz relic, Rick Dalton (Leonardo DiCaprio) and his reckless stunt double Cliff Booth (Brad Pitt) with the rise of the very real actress Sharon Tate (Margot Robbie) over the first six months of 1969. The wonderfully drawn characters of Rick and Cliff (composites Tarantino shaped in part from stories he heard about TV actors and stuntmen) and their touching friendship, is at the heart of this rich, multi-layered film, with a huge cast who themselves have links to Rick’s past and Polanski’s future.

In her statement, Didion was referring to the senseless slaughter at 10050 Cielo drive by Charles Manson’s cult. The cult members were squatting at the old Spahn Ranch in Chatsworth and taking tourists on pony treks. In the movie, Cliff Booth used to work at Spahn Ranch where stuntman George Spahn (Bruce Dern) lived. In real life it is alleged that Doris Day’s son and music producer Terry Melcher (whose house Polanski was renting) decided to reject Manson’s music contract after witnessing Manson in a fight with a drunken stuntman at the Spahn Ranch. In the film, it is Cliff who gets into a fight with one of Manson’s henchmen at the ranch.

Cliff, who has the afternoon off (he chauffeurs Rick, who lost his driver’s licence) picks up a fetching, lanky teenager named Pussycat (a sensational performance from Margaret Qualley, playing a composite of several Manson girls) who is hitchhiking on Burbank Boulevard to get back to the ranch. Dennis Wilson of the Beachboys also picked up a Manson hitchhiker and it was Wilson who introduced aspiring musician Manson to Melcher. 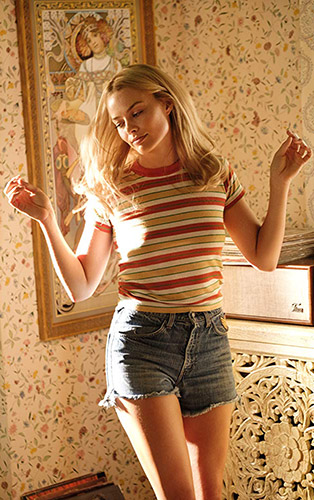 Margot Robbie in Once Upon a Time in Hollywood

During the ride, Cliff becomes convinced that Pussycat, now lying in his lap as he drives, is underage, but tells her he is willing to drive her out to the ranch to visit his old friend George. In this fabulous ranch sequence – that is shot like a mini-western – the tension builds until Cliff forces the hippy who sticks a knife in his tyre to fix it, seconds before one of the Tate murderers, Tex (Austin Butler) Watson, arrives.

The conflict begins when Cliff is barred from entering George’s house, now taken over by the Manson group who live in squalor watching TV all day. Though alone, and watched by a horde of angry disciples, Cliff, the picture of cool confidence, pushes his way into the house to discover that George, now blind, is a prisoner of Lynette ‘Squeaky’ Fromme (Dakota Fanning) who forces him to nap so he can stay up with her to watch F.B.I. (1965-1971). It is one of the many ironic jokes in the film that Rick and Cliff rush back to Rick’s to watch F.B.I. Burt Reynolds was signed to play Dern’s role, but he sadly died last year before his scenes could be shot.

Rick Dalton lives on Cielo Drive in the Hollywood Hills next door to Tate and Polanski whose status he is aware of. Once Rick might have imagined himself working with someone of Polanski’s stature, and, as we see at the end, still harbours a hope. Dalton is old school and does not fit in with the new school director or actor such as Jack Nicholson, Donald Sutherland or Elliott Gould. Nicholson’s Five Easy Pieces seems lightyears, not just one year, away from the end of Rick’s long star run on The Bounty Hunter. He is more in the mould of network TV series stars George Maharis (Naked City) Ty Hardin (Bronco) and Edd Brynes (77 Sunset Strip).

In an early scene Rick has a meeting at the legendary Musso & Frank Grill on Hollywood Boulevard with producer/agent Marvin Schwarz (Al Pacino, in a goatee, big sunglasses and a great 1960’s suit) who smells a star in trouble like a lion smells a wounded gazelle. ‘Are you going to continue getting the ass kicked out of you, or do you go to Italy and make Westerns and win fights?’ Italy means ‘the world’s second-best director’ of spaghetti westerns, Sergio Corbucci, not Leone. Rick is a hit in Italy but lives beyond his means and returns with an Italian wife (Lorenza Izzo). 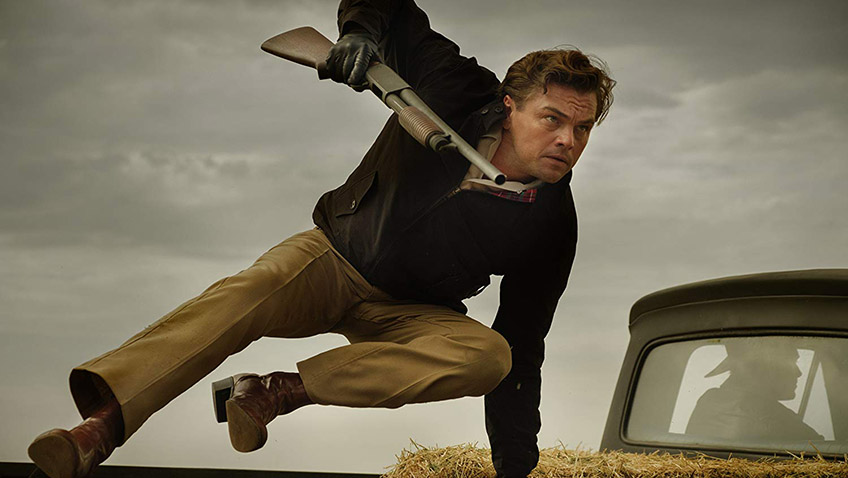 Leonardo DiCaprio in Once Upon a Time in Hollywood

While mulling over this proposition, Sam Wanamaker (Nicholas Hammond) offers Rick the supporting role of a bad guy in Lancer, and Rick, though he has lost his negotiating power, tries to persuade Sam and stunt coordinator Randy, (Kurt Russell) to take on Cliff, a pariah in the business after allegedly killing his wife (in a mysterious ‘accident’ like Natalie Wood’s). Randy reluctantly agrees provided Cliff stay away from his wife Janet (Zoe Bell, the real-life stunt coordinator on Once Upon a Time in Hollywood

). In arguably the funniest scenes in a film that, despite the subject matter, is full of dark humour, Cliff challenges the pretentious and condescending stunt trainer, Bruce Lee (Mike Moh) to a fight and smashes him into Janet’s car, leaving a huge dent.

In a beautifully edited sequence, while Cliff is out at the Manson/Spahn Ranch and Rick, hung-over and choking on cigarettes (we see that Rick makes money from cigarette ads, as the tobacco firms sponsored F.B.I. and other series), is struggling to remember his lines on Lancer, Sharon Tate goes to see her new film, The Wrecking Crew. Although he does not immediately recognise her, the cinema manager treats Tate like royalty, and gives her a free ticket. Tarantino keeps the camera on Robbie’s face as she registers with pride the laughter in the audience at her pratfall. It is perhaps the defining moment of the film and is echoed in a scene that showcases Tarantino’s talent for much more than violence. Rick has one last take to prove himself on Lancer and he gives it his all. Eight-year-old Trudi (Julia Butters – fabulous), playing the hostage to Rick’s bad guy, whispers to him, ‘that’s the best acting I’ve seen in my whole life’, as Rick fights back the tears.

This is Brad Pitt’s film and he is superb, while DiCaprio has a harder time convincing us he was ever a TV western star. But in this scene with Butlers, and another, he reclaims his side of the marquee. Ambitious, young method actress Trudi is reading a hardback biography of Walt Disney and asks Rick about his paperback. He tells her it is a sort of autobiography of an actor ‘coming to terms with what it feels like to be more useless each day’.