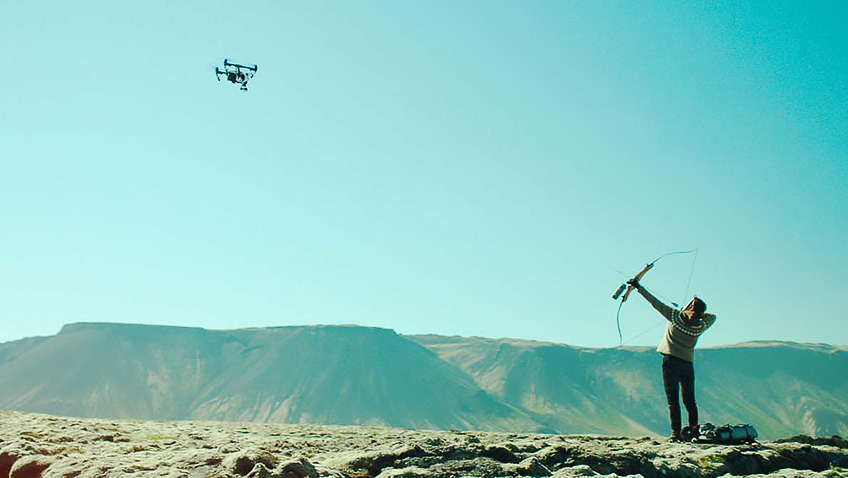 It is best to go into this splendid and refreshingly original film knowing nothing about it, and perhaps expecting an Icelandic equivalent of the Marie Colvin biopic, A Private War. But no one who saw writer/director Benedikt Erlingsson’s last film, the whimsical, dark comedy Of Horses and Men, would entertain such thoughts, although A Private War would have been the perfect title for Erlingsson’s new film. Erlingsson admits that measures to protect the environment can be a good breeding ground for comedy in a small country like Iceland, but points out that ‘in other countries there is only tragedy.’ In an interview, he cites the murders of female environmental activists such as Berta Cáceres from Honduras and Yolanda Maturana from Columbia.

is more than a film about protecting the environment, however, important as that topic is to the director. It is a character-driven portrait of Halla, a 50-year-old unmarried and childless woman who leads a double life in more ways than one.

Halla is both a respectable choir master in feminine dresses and an eco-warrior dressed in a thick, brown woolly sweater, dark trousers and dirt or camouflage on her face. Later, the plot revolves around another kind of double life because her sister, a yoga teacher and serious mystic is her twin.

The real treat is that Halla is played by Iceland’s foremost theatrical actress and comedienne, Halldóra Geirharðsdóttir who carries the film (and, at one point, a dead sheep carcass over her head and body). Geirharðsdóttir, who is famous in Iceland for having played Vladimir in Waiting for Godot and the knight in Don Quixote, could be mistaken for a man from a distance. As she dives under crevices to avoid detection and runs across the open moors, you are reminded of fugitive Richard Hanney running for his life across the Scottish highlands in Alfred Hitchcock’s The 39 Steps.

Halla is not only strong, nimble, and adept at eluding the helicopters and drones, but her stamina is as admirable as her aim with a bow and arrow. Halla is Iceland’s answer to Hawkeye in the Avengers, and she is single-handedly avenging mother earth from the aluminium industry, as Rio Tinto is about to begin operations of its new aluminium plant in the highlands.

It is the first of two whirlwind scenes in the highlands that allows Erlingsson to call the film both an action movie and a fairy tale. Halla’s great escape is both thrilling, and, in a hilarious meeting with an unlikely saviour, magical. Everyone, even a Superhero, needs some help from time to time, and here it comes from a big, hirsute greenhouse farmer (Jón Jóhannsson) who lives alone with his clever dog – pointedly named Woman – and who might just be related to Halla.

The joke here is that everyone might be related in Iceland so small is the gene pool, but the chemistry between Geirharðsdóttir and Jóhannsson lights up the screen. Not for the last time does the farmer hide Halla from the search parties as he gradually becomes her accomplice. On this first encounter he begrudgingly loans Halla his car and she speeds back to town where she is just a few minutes late for choir practice. 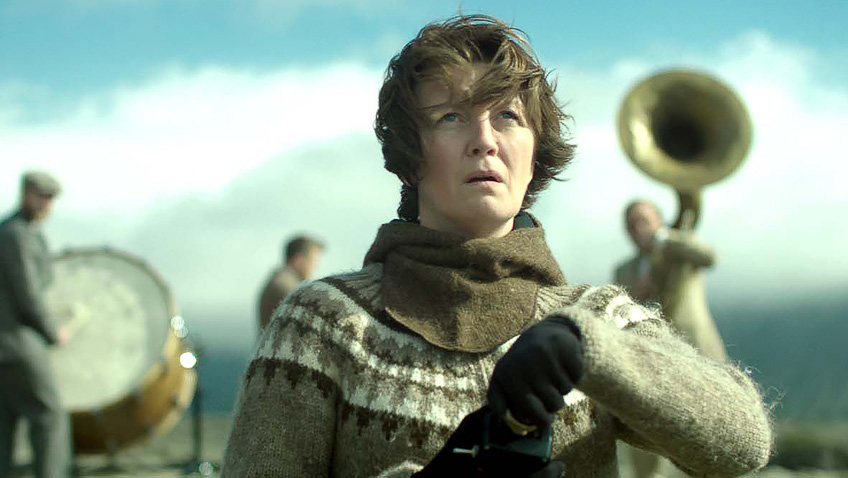 Halldóra Geirharðsdóttir in Woman at War

Erlingsson is not the kind of filmmaker to give us a straightforward environmental thriller or action movie, of course. Before long the film is saturated with Greek gods (Artemis, goddess of the Hunt with her bow and arrow); a Greek chorus, (in the form of a live band, headed by composer Davíð Þór Jónsson, and musicians Magnús Trygvason Eliassen and Ómar Guðjónsson); Ukrainian folklore (a Ukrainian female cappella trio), and Icelandic myth. For Halla happens to be the name of one of the two last outlaws in Iceland’s history, who, like present day Halla, survived on the run in the highlands in the seventeenth century.

Then Erlingsson adds a new dimension and richness, not to mention that all important moral dilemma to the story. Halla had nearly forgotten that years before she had applied to adopt a Ukrainian orphan and has, at this point, given up hope of having a child. Finally, though, the application has been approved. Halla is given a photo of a pretty, five-year-old girl with lively eyes and no future if Halla does not travel to Ukraine to save her.

Overjoyed as she is, Halla is torn by a news announcement that stirs her sense of responsibility to cause some serious damage to pylons and wires. But of course any prison record or even encounters with the police would jeopardise her application.

Here Erlingsson slyly delivers a variation on that old cliché in crime dramas where the protagonist has just one last bank to rob before he retires forever. And we all know that the last job never goes smoothly.

is so much fun that you won’t want it to end, and when it does you might want to see it again. That is not say it is perfect. While Erlingsson’s inclination to break the fourth wall with the band is quirky and funny at first, it suffers from diminishing returns. The band, serving as a Greek chorus, is in situ where ever Halla goes: in the Highlands, on the roof of buildings, by the roadside and even, in Ukraine. The Ukrainian trio also overstay their welcome.

This overdose of whimsicality aside, Woman at War

is not only uplifting and unpredictable, but confirms that there are plenty of great roles for middle-aged actresses if only someone will write them and finance them.