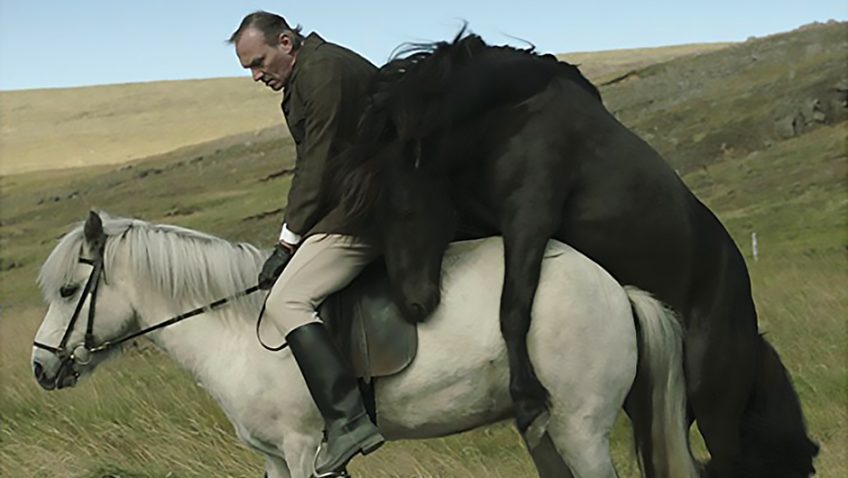 Unpredictability is an understatement

is a collection of six loosely-interrelated stories about a remote Icelandic community’s relationship with its horses and its inhospitable landscape.

It is not to be confused with Sherwood Anderson’s collection of stories, Horses and Men, but then again, so eccentric and distinctive are these stories, with their mix of black comedy, farce, drama and tragedy that it is unlikely to be confused with anything you’ve seen or heard of.

Prepare yourself for a journey into a world as alien as that of any Sci-Fi movie this year, yet much more real and absorbing.  To call the film unpredictable is an understatement.  But our inability to imagine where each story is heading and how it will get to its punch line or its moral is how Erlingsson hooks you in and creates tension.

In the remote rugged plains of Iceland, bound by the icy fjords, men (and women) rely on horses for more than their livelihood. Horses and binoculars seem to be the staple of life on the long expanses of scrub prairie.  The sparse population is on hand with binoculars when the proud owner (Ingvar Eggert Sigurðsson) of a high-gaited, high-strung white mare takes her for a stroll to the ranch of an attractive woman (Charlotte Bøving) where he has lunch.

The horse’s rapid, rhythmic, prancing is something to behold, but it is not only the neighbours who watch the spectacle. A black stallion in the paddock escapes and mounts the pretty mare while its humiliated owner sits helplessly in the saddle.  From here, though, the jovial tone changes rapidly as both human lovers react to the objectionable breeding.

In other stories an Hispanic tourist becomes resourceful when he gets left behind in a snow storm, while a pretty, young Swedish woman proves herself the equal of her male counterparts and becomes a heroine when their valuable stock escape.  IN another tale, an alcoholic older man uses his binoculars to spot a cargo ship passing down the fjord.

Panicked that he will not make it with his four-wheel drive, he resorts to a hapless horse. Together they swim out to the ship where the man purchases some lethal alcohol.  Another story involves a feud between a stubborn old horse breeder and a struggling farmer who has put a fence across a public bridleway.

The amount of dialogue in Of Horses And Men

would hardly fill three pages, but the visuals are so expressive that words would be superfluous. Each story is attuned to the weather and landscape as well as to the personalities of these idiosyncratic men and women who just get on with things. If horses die, so do people, but certain scenes have compelled Erlingsson to declare that no horses were harmed and all involved in the making of the film are horse lovers.

While this is reassuring it also reminds us that these slice-of-life-and-death stories, though grounded no doubt in anecdote, are designed to evoke a reaction amongst non-natives.  So if you feel a bit manipulated it will only be after you’ve been taken in by the film as intended.