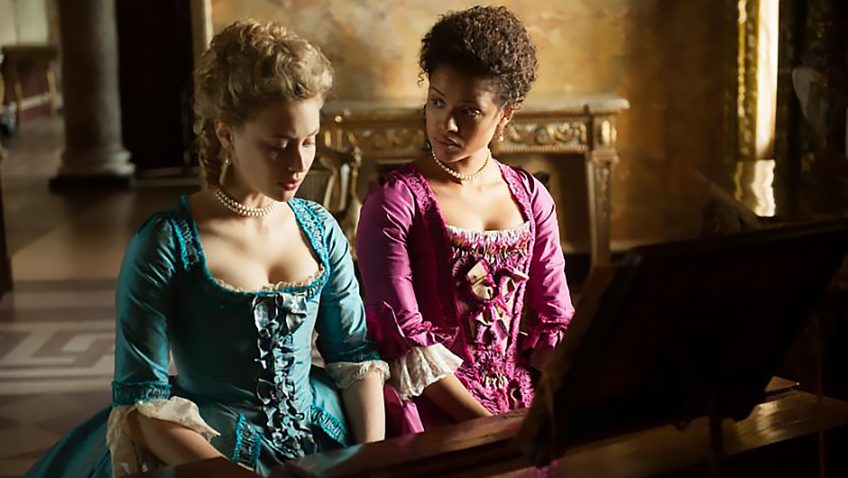 tells the story behind an unusual 1799 painting by Zoffany that shows two attractive, fashionable young ladies, one white and one black, frolicking in a landscaped garden. It once hung in Chief Justice Mansfield’s country house, Kenwood, on Hampstead Heath and is now in Scone Palace in Scotland, the family seat.  It’s just a shame that pedestrian direction and expository dialogue leave Belle

a great story in a mediocre British movie.

Unlike all other depictions of blacks in paintings of the time, the black woman in the painting is not on the ground looking up at her mistress, but is standing next to the white woman, both looking out at the viewer. While the two look like equals, the black woman’s head is wrapped in a turban and her index finger is pointing to her dark skin.  The painting, which seems to weigh England’s rigid class system against its racial inequality, is curiously altered in the film, but nonetheless lies at the heart of Belle

The white woman is Lady Elizabeth Murray (Sarah Gadon) and the other is Dido Elizabeth Belle (Gugu Mbatha-Raw), the illegitimate daughter of a slave named Maria Belle and Royal Navy Captain Sir John Lindsay (Matthew Goode), a nephew of Lord Mansfield.  Both Lady Elizabeth and Dido Belle are dumped at the Kenwood home of Lord Mansfield (Tom Wilkinson) and Lady Mansfield (Emily Watson) by their fathers, Lord Murray and Sir John Lindsay respectively, when the girls loose their mothers.

While Sir John loves Dido as his blood daughter, Lord and Lady Mansfield cannot hide their initial shock and disapproval. Their nephew being called away to sea, however, they have little choice but to bring her up with her half-cousin, Lady Elizabeth.  While Dido plays and is schooled with Elizabeth, she suffers the humiliation of being excluded from the dinner table.

This anomaly is not missed by a principled vicar’s son and progressive young law pupil, John Davinier (Sam Reid), when Dido catches his eye. While one of the few facts we know about the real Dido is that she married and had two sons with a steward named John Davinier, it is unlikely he was the anti-slavery radical who becomes an apprentice under Lord Mansfield.

The plot thickens when Lord Mansfield presides over the controversial Zong slavery trial, which pitted cargo insurers against slave owners who drown their ailing slaves to claim on the insurance.  At the same time, Sir John dies leaving Dido a generous inheritance.

This makes her a desirable match for the Ashford family who begrudgingly overcome their racial prejudice for the inheritance.  The irony is that while white, Lady Elizabeth is not an heiress and is left to beg for suitors, a situation that creates a rift between the girls.

is a story that you couldn’t make up if you were looking for a subject for a film and the film misses little of its dramatic potential. Nor does it miss a chance for expository dialogue, and every third line of Writer Misan Sagay’s script pumps us with historic and factual information that the characters already know, but we do not.

Director Amma Asante is not experienced enough to rise above a script that spells everything out for the audience with the subtlety of a sledge hammer.  Right after Lady Mansfield reminds her husband of the ideological rebel she married with a spark in his eye, we see him listening to Davinier’s righteous anti-slavery speech as though watching his younger self. This in turn predicts the verdict in the Zong trial scene.

While the period details are admirable, Asante is willing to overlook period mores and her character’s natural common sense for dramatic effect.  Why would Dido sneak into the court room and risk compromising Lord Mansfield? His ability to conduct the trial was already questioned due to his affinity with a black slave’s daughter. Nor would an 18th century uncle leave his unmarried niece alone on the street after the trial, hugging and kissing her suitor.

Asante tells us, ‘I’ve never seen a film about the Jane Austen element we know so well – the marriage market, the lives of girls growing up into society ladies, the romantic longing – combined with a story about the end of slavery.’  This is a curious statement for two reasons.  First, because slavery did not end until 1833, long after the Zong trial and second because Jane Austen herself wrote the conspicuously entitled Mansfield Park

In the novel, a father drops off his socially disadvantaged daughter, Fanny, at the home of plantation owning relatives when he can no longer care for her.  Fanny is not brought up altogether equally, but is exposed to the typical Austen social scene, while discovering horrific evidence of the atrocities of slavery.