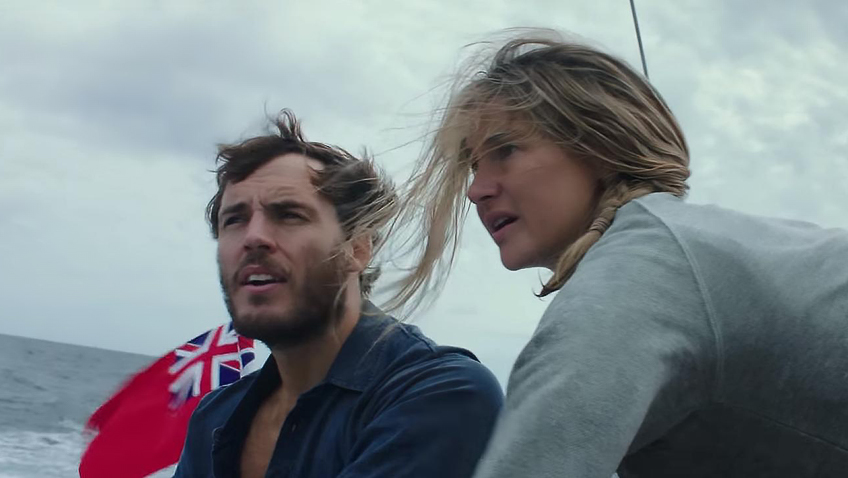 What would summer in the cinema be without a long-legged woman in jeopardy on, or under, the cool, enticing sea? Last July we were on the edge of our air conditioned seats watching the survival instincts of two sisters kick in with 47 Metres Down and the August before that we thrilled at Blake Lively stranded on a surf board, trying to keep a sharp at bay in The Shallows Icelandic director Baltasar Kormákur, who made the true survival extravaganza, Everest, gives us this summer’s survival-on-the high-seas film. Though it may seem like another excuse to show a shapely, long-legged young woman in a bikini, Adrift

is based on the true story of Tami Oldham and Richard Sharp, who sailed into 1983’s Hurricane Raymond on their way from Tahiti to San Diego.

Our first glimpse of Tami (Shailene Woodley) is when she is regaining consciousness below deck with the yacht’s fixtures and furniture floating around like bump cars waiting to deal her another blow. She screams for Richard, as she tries to get out of the flooded hold of the sail boat. Then, as Tami breaks free onto the deck, a caption tells us we are going back five months.

A customs officer is asking a far more relaxed, healthy and dry young woman how long she will be in Tahiti (she can’t say) and what her profession is.

‘Whatever will pay me enough to get to the next place,’ is not the answer The Rt Honourable, Caroline Noakes would want to hear, but it tells us that Tami is a free-wheeling, independent, traveller looking for adventure. Later we learn that she left her dysfunctional family in San Diego as soon as she finished High School and became a cook on a schooner that sailed to Tahiti where her contract ended.

Having landed a job doing odd jobs at the harbour, she meets Richard Sharp (Sam Claflin) an equally adventurous British sailor who sails into the harbour like the answer to a prayer. He is captivated by Tami’s wild side, her fearlessness, her love of boats and the sea and of course, she doesn’t look half bad in a bikini. A decade older than Tami, Richard is as attracted to Tami as she is to him. 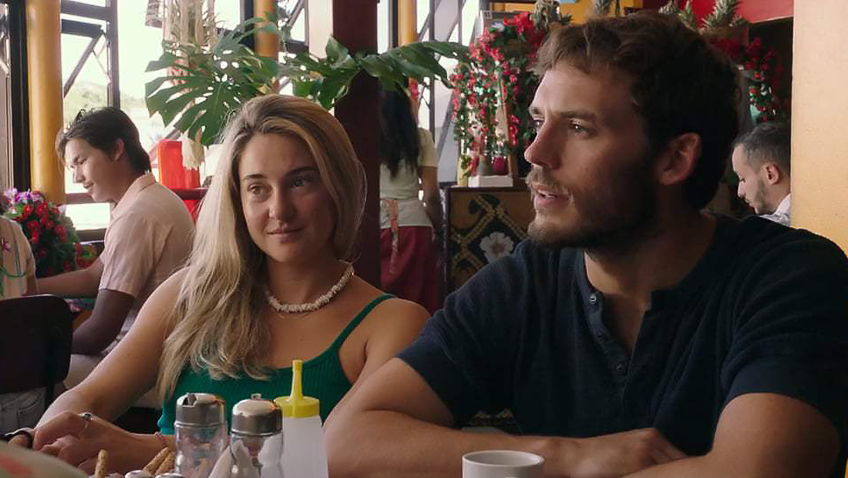 Their holiday romance is shown in a series of montages, and Kormákur makes it real. What we are watching is a young couple falling in love. If you don’t know the story (and do not look it up before seeing the film), you might suspect there is something sinister about Richard, because, romantic, fun, handsome, polite and intelligent, and resourceful (he built his own sailboat), he is pretty much perfect.

Just when the lovers are agreeing to travel the world together, Richard bumps into a couple he knows who offer him $10,000 to sail their expensive, 13 meter luxury yacht to San Diego so that they can fly back for an emergency. The destination is one coincidence too far for Tami who is in no hurry to return to the place she fled after high school. Eventually, they compromise on the route and set sail on a 4,000+ mile journey; a kind of honeymoon based on a handmade ring Richard gives her.

These background scenes are juxtaposed with the continuation of the opening scene. As soon as Tami makes it to the deck she searches for Richard and is thrilled to see him hanging onto a lifeboat, but alive. As she struggles to drag his semi-conscious body onto the yacht, she notices a gash in his leg.

From that point on, for another 39-odd days, Tami nurses Richard as she gambles on heading for Hawaii, a target she could miss. Day after day, she goes down below deck to pump out water and look for supplies. Beer and cigars help Richard deal with his pain, while they consume a jar of peanut butter as though they were making love. When the canned food is gone, Tami, who is a vegetarian who refuses to harm any living thing tries her hand at spear fishing.

The film, like the autobiographical novel on which it is based, cuts back and forth between the romance in Tahiti, Tami’s struggle to survive after the storm, and the storm itself as Tami drifts into semi-consciousness, from thirst, sunstroke and hunger. In film, this cutting tends to reduce the tension to the point that we arrive at the storm just in the nick of time. If the survival routine never grows tiresome, we’ve seen it before (In Robert Redford’s more ingenious measures in All is Lost  and in The Life of Pi, among others. As far as storms, go, however, his Hurricane Raymond is convincing enough to lead to sea sickness.

And then Kormákur scores another point for coming up with the twist that gives the film a new lease on life, although you might have guessed it. If you haven’t, you will either resent the subterfuge or find it plays with your emotions in a satisfying way.

If Richard Sharp comes across as too good to be true, as an actor Claflin is not half bad either. He was terrific in a nuanced role in My Cousin Rachel and tore your heart apart, inspiring compassion and pity as Captain Stanhope in Journey’s End. But this is Woodley’s film, and she demonstrates, as she did in Divergent, and in The Fault in our Stars that she can raise the level of a mediocre movie.

Kormákur is harder to classify. He has made violent, dark, action-packed American films with an A-list actor or two like Contraband and 2 Guns that are worse than they sound on paper. He has made some gem-like Icelandic films that are much better than they sound, including the atmospheric, character–driven detective movie, Jar City, and his breakthrough film, 101 Reykjavik. Kormákur also likes his true survival stories, including the aforementioned Everest and The Deep. Adrift

squarely falls into that category but is arguably the closet Kormákur has come to making a love story.