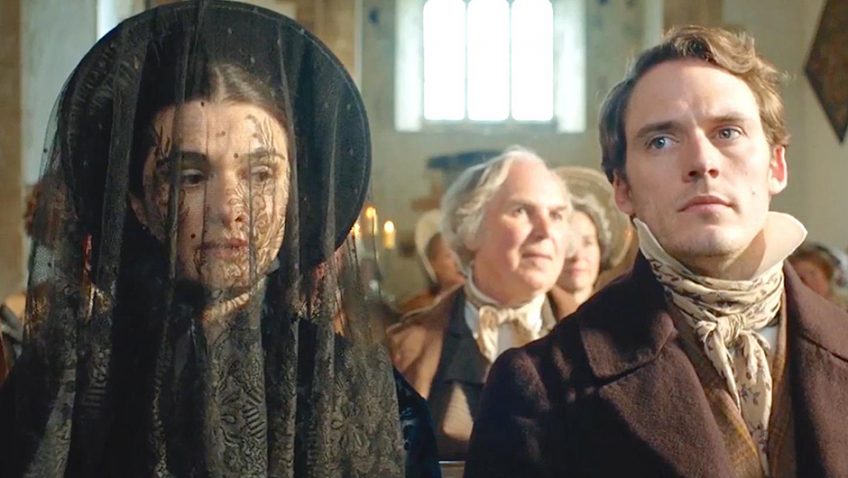 is not just a good old-fashioned Victorian thriller, but a big tease written in 1951. The challenge for any director adapting it for cinema is to sustain our interest in the ‘is she or isn’t she?’ quandary so that we don’t lose patience with the game and both protagonists. Roger Michell, the talented, inventive South African writer/director (Le Week End, Notting Hill) does not quite manage it.

The long set-up to the main action is executed in a voice-over narration where we see, in montage form, what the narration is telling us. This expository technique is perhaps unavoidable, but it’s not the strongest of openings. Once the action starts, however, we are transported to a Gothic world thanks to cinematographer Mike Eley. The unreliable narrator is Philip (Sam Claflin). As a 7-year-old orphan, he was taken in by his bachelor cousin Ambrose, the owner of a large, profitable estate on the Cornish coast. The two enjoy a very close relationship until, on one of Ambrose’s health-cures in Florence, he marries.

Philip misses Ambrose terribly, but has to accept his decision to marry their mutual cousin Rachel and remain in Italy. He is spurred to action, however, by a worrying letter from Ambrose complaining that he cannot trust the doctors and Rachel is constantly watching him. The letter ends, ‘She has done for me, Rachel my tormenter, come quickly.’

Philip travels to Ambrose’s villa in Florence, but is too late and Rachel is gone. When Philip returns to Cornwall, his godfather, Nick Kendall (Iain Glen) informs him that the death certificate confirms the cause of death was a brain tumour. More surprising is the news that Ambrose never changed his will and Philip remains the beneficiary.

When, two weeks later, Rachel (Rachel Weisz) shows up in Cornwall – hardly the fat, dowdy shrew of Philip’s imagination – there are no grounds to suspect foul play. But throughout the film, the viewer is urged to believe otherwise, while at the same time, being fed a steady diet of doubt.

Rachel concocts suspicious brews like one of Macbeth’s witches and Philip, smitten by the worldly, older woman, rejects Nick’s warnings about changing his will in Rachel’s favour. Then again, is Nick’s advice objective, given that he hopes for a union between his daughter, Louise (Holliday Grainger) and Philip?

Just when you suspect Rachel, events conspire to dissuade us. This game does grow tiresome as we begin to suspect there is no right answer. That Michell maintains the suspense at all is to his credit, but also owes a lot to Weisz, with her terrifically ambiguous demeanour. The problem is our attitude toward Rachel never changes. We should, at times at least, feel sympathetic toward Rachel, a poor, middle-aged widow alone in the world and mistrusted by her former husband’s family, she is unreadable and devoid of an interior life. Rachel Weisz in My Cousin Rachel

The realisation that Philip’s reckless decisions are clearly influenced by his newfound, confused sexuality should make him more sympathetic to us. Rather than feel for Philip, however, you can’t help but lose patience with his impetuosity and with the film’s contrivances.

Mitchell gives us plenty of clues about Philip’s sexuality, but the homoerotic essence of the story fails to permeate the heart of the film. This cannot be out of coyness as Michell’s first feature was the film adaptation of My Night with Reg.

Philip works happily in the fields with the male farm workers, but he has no close friends other than Ambrose. Nor does the handsome, eligible bachelor have any girlfriends, and he seems to ignore pretty, intelligent Louise who is his age. In a significant early scene, Nick and Louise are invited for lunch and the talk turns to this mysterious Rachel. ‘She must be something for my cousin to write about her,’ Philip says. Nick recalls, ‘your cousin never had much need for women,’ to which Philip replies, ‘Why should he? He had me.’

It is little wonder that Philip’s pent-up sexual desire would impede his judgement, particularly as he is still mourning the death of Ambrose. When Philip loses his virginity to Rachel, he is in heaven and certain that she will accept his proposal of marriage. He can only interpret her unequivocal refusal as a wish to retain the estate for herself, given the terms of his new will. Rachel is far less welcoming at their second sexual encounter after she misses their rendezvous and Philip lies in wait for her with a picnic basket.

Michell holds the camera on Rachel’s dispassionate, ungratified face as Philip, who has just turned 25, reaches sexual climax like a school boy. Any pretence that the encounter was a romantic one is dashed when Rachel matter-of-factly rises to wipe all traces of Philip off of her, throwing the handkerchief in the trampled bluebells.

There is another, related, psychological thread to this story, one that fails to cast the dark shadow it should over the film. While Rachel and Philip have nothing in common (the ten-year age gap in the novel is doubled with the casting of Weisz), by marrying Ambrose’s wife, the two men would retain their close connection. By doing away with Rachel, however, Philip would enact revenge for the loss of his beloved male cousin and eliminate the female who ended their Cornish idyll.