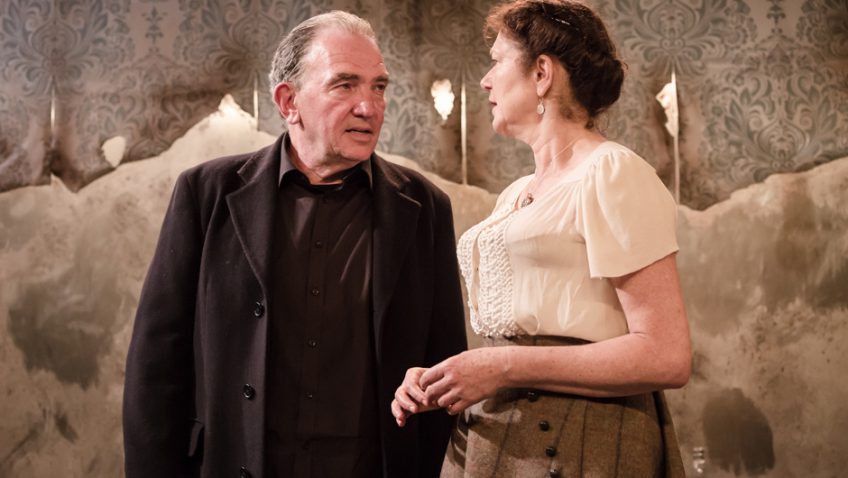 Anthony Biggs takes his farewell as artistic director of Jermyn Street Theatre with a UK premiere of Maxim Gorky’s play about police corruption. Written in 1908 it was banned in Russia and had only one performance in his lifetime. So this revival is rather special and deserves full houses.

Gorky was jailed and exiled for his political activity. Gorky (the name he gave himself) means “bitter” in Russian. It was rumoured, but never substantiated, that his death in 1938 was murder, ordered by Stalin The Last Ones is set in Kazan in 1907. The characters are victims of the corrupt and evil times in which they live and bribery is essential if they are to survive.

Gorky concentrates on one family whose nanny complains that they are always shouting and fighting. It is because parents behave like children that families become a breeding ground for anarchy and terrorism.

In the aftermath of the 1905 revolution hundreds of Tsarist police officers were assassinated by terrorists. Ivan Kolomiittsev (Daragh O’Malley), a police chief, was forcibly retired. The only way for him to get back in the force is by bribing the right official; and even with a bribe it will only be at the lower rank of police superintendent.

But Ivan hasn’t the money. He has spent it all on women and gambling. He, his wife and five children lodge in the apartment of his rich brother (Tom Wodward), a decent kindly man.

The play opens with Ivan having just been shot at in an attempted assassination and he having identified a suspected terrorist he knew full well hadn’t done it. The suspect’s mother (Gillian Fitzpatrick) wants a public apology in which he will admit he made a mistake.

Such an admission will ruin his job prospects; and Ivan, a vile, inhuman, ruthless and repulsive brute, is not the sort of person to apologize, anyway.

His long-suffering wife (Louise Gold) had had an affair with his brother and she had a girl (Annabel Smith) by him, who was crippled in an accident when she was very young and has been bitter ever since.

Anthony Biggs’ production is well acted and will be a treat for Gorky enthusiasts.