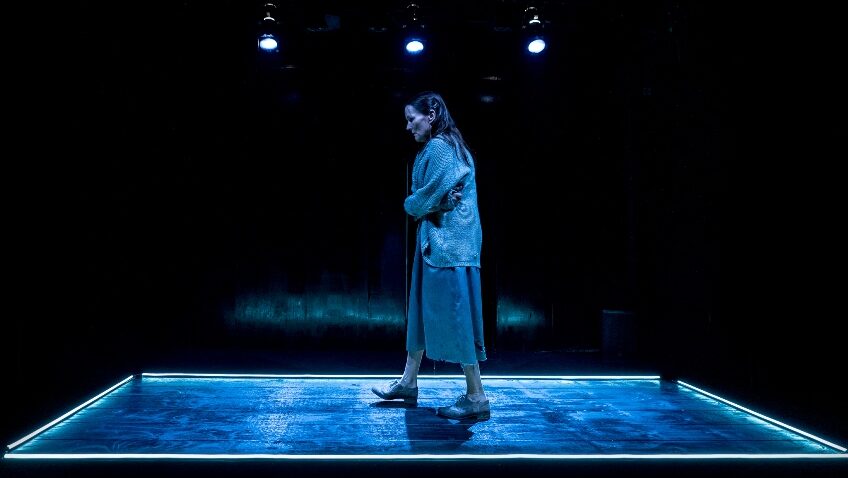 The English actress Billie Whitelaw, Samuel Beckett’s muse and foremost interpreter of his work, who died in 2014, aged 82, has given a vivid and invaluable account of what it was like to work with Beckett in her autobiography, Billie Whitelaw Who He?

Beckett was very exacting about how he wanted his plays performed and his detailed stage directions, with its attention to pauses, silences, slowness and lighting, are as important as the actual intonation of the words. When Whitelaw complained that audiences might get bored, he retorted: “Bore them to death. Bore the pants off them!”

At Jermyn Street Theatre, where Beckett is always welcome, a large cube and a relatively small rectangle, created by strips of white light, share the same tiny dark stage, a stark setting for two very short and stark plays.

Footfalls was written for Billie Whitelaw. Directed by Beckett, it premiered at the Royal Court in 1975.

The sound of feet, endlessly pacing up and down a narrow strip of light (representing a landing), is heard. The distressed woman (Charlotte Emmerson) talks to her bedridden mother whom she has wasted a lifetime looking after. Beckett said the woman “exists in that ghostly spiritual half-way between living and not living” and he wanted her voice to be “from beyond the grave.”

This elegiac lullaby, written in four movements, is the more obviously poetic and the starker of the two plays. It premiered in 1981 at the State University of New York at Buffalo. Billie Whitelaw starred.

At the close of day, a lonely woman (a stoic Sian Phillips), prematurely old, sits in a darkened room in a rocking chair, listening to her pre-recorded voice, which repeats the same lines over and over again. The woman yearns to reach out to all the other lonely creatures like herself. Slowly going out of her mind, she rocks away her life until she dies.

Beckett’s bleak miniature plays are directed by Richard Beecham and together, played straight through and without interval, they last just forty minutes and are strictly for Beckett aficionados.