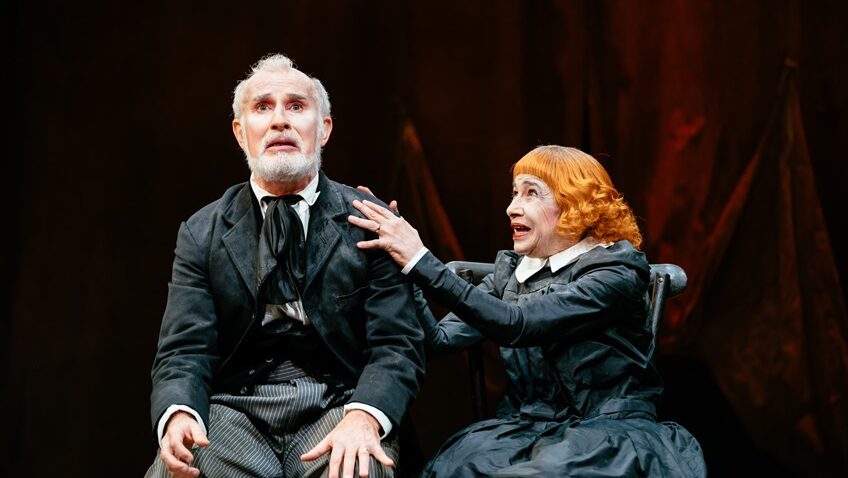 One of theatre’s most memorable images is a stage crammed full of empty chairs and a host of imaginary people.

The Rumanian French playwright Eugene Ionesco (1912-1994) was the leading exponent of Theatre of the Absurd, which flourished in the 1950s and 1960s. His comic and surreal plays were extremely popular.

The Chairs is described as a tragic farce and, like Samuel Beckett, Ionesco touches on the depths of black despair and the inevitability of death. His theme is nothingness and the impossibility and futility of communication. Reality and language lose their articulation. The dialogue is notable for its conversational banality.

Two old people in their nineties live in a lighthouse. The old man has a message for mankind and he has engaged a professional orator to speak for him. He invites everybody he has known (and not known) to hear the message.

Gradually they arrive, at first one by one, and the old man and his wife enter into polite, clichéd conversation whilst filling the stage with chairs. The guests are totally invisible. When the orator finally arrives, he turns out to be deaf and dumb and only able to moan, groan and make the sort of guttural sounds made by mutes.

The Chairs was first performed in Paris in 1952 when it failed. Four years later it was revived with great success and then produced in English at The Royal Court in 1957 with George Devine and Joan Plowright. 40 years later it was back at The Court with Richard Briers and Geraldine McEwan. Now the elderly couple are played by Kathryn Hunter and Marcello Magni, two highly original performers and wife and husband in real life.

Magni was a founder member of Theatre de Complicité and the present production is very much in the Complicité physical manner. The slapstick is rooted in the commedia dell’arte tradition. The performance feels like a music hall routine and yes, there is audience participation.

The revival is directed by Omar Elerian who also translates and takes many liberties with the text. The setting is no longer a lighthouse but a theatre. Off-stage, Magni can be heard over a tannoy saying he doesn’t want to go on and that the dialogue is too difficult to learn.

A huge and irritating departure from the original is that the orator never appears. Instead, actor Toby Sedgwick (in his role of stage manager) describes what the orator would have looked like and worn and what he would have done had he appeared. Ionesco’s climax is infinitely more powerful and should have been kept. Why change it?

Ionesco’s The Lesson is about to be revived. Hopefully, somebody will think of also reviving his very first play, The Bald Prima Donna.