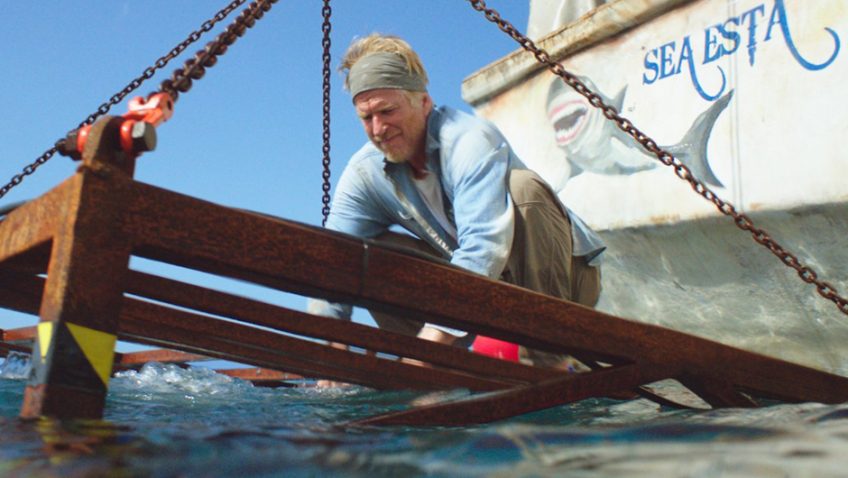 Years after Jaws, producers looking for summer fare have begun to recognise the potential of a cross between Jaws and Bay Watch, in which a babe in a bikini matches wits with predatory sharks, and not of the human male variety. Last summer we had the stunning model/actress Blake Lively play a lone surfer on holiday in Mexico who comes to terms with grief and a nasty shark in The Shallows. While Lively stayed mainly on the surface of a cove, British writer/director Johannes Roberts (The Other Side of the Door) delivers an underwater thriller in which, not one, but two good-looking American girls get in too deep on a Mexican holiday.

You might get a queasy feeling from the get-go when the title comes up in red letters that become diluted, like blood in water, but 47 Metres Down

really isn’t as cheesy a film as you might suspect from this none-too-subtle opening.

Lisa (Mandy Moore) is supposed to be on holiday with her boyfriend and is doing a lot of soul-searching. She believes he ditched her at the last minute because, like her life, she is boring. As it was too late for a refund on the holiday, Lisa has invited along a family member instead. If, you are protesting, this is the exact premise of the mother/daughter comedy Snatched released earlier this year, get over it. 47 Metres Down

is no laughing matter.

Lisa’s blond, sexy, fun-loving and daring younger sister Katie (Claire Holt) is just the person to get Lisa out of her self-pity mode and into the limelight. When Lisa wants to turn in early, it’s Katie who encourages her to get dolled up and go out dancing. The two handsome locals (Yani Gellman and Santiago Segura) who pick up the sisters at a nightclub invite them along the following day to swim with sharks. Reluctantly, Lisa accompanies her enthusiastic, sporty sister.

Though Lisa wants to prove to her boyfriend that her life is exciting, she is inherently cautious and sensible. ‘Is this even safe?’ she asks on the way to the boat. ‘The concierge said we should book all activities through the hotel.’ And some, like me, in the audience, might recall that faulty oxygen mask they were given on a Club Med dive in Mexico, shuddering at the idea of a rusty old fishing boat run by a private contractor. 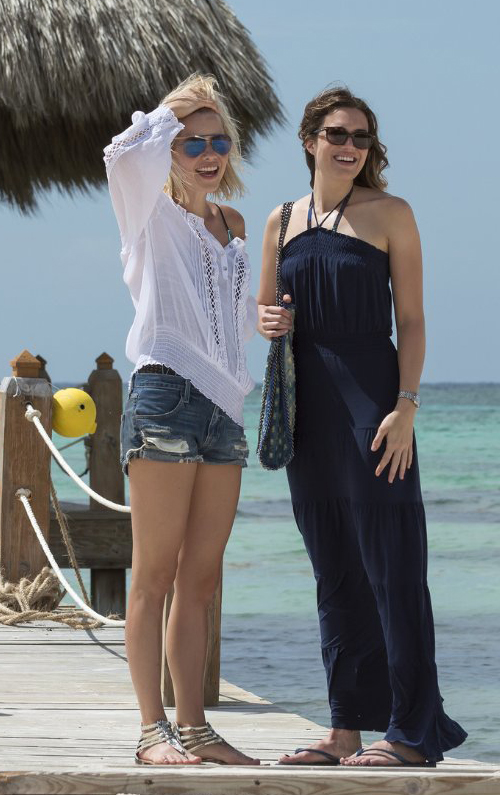 Mandy Moore and Claire Holt in 47 Metres Down

Katie reminds her that she is in Mexico to prove her boyfriend wrong and that it’s time to start living life. The young men reassure the sisters by going down first in the cage and emerging intact. And as Lisa changes into her half wetsuit (naturally, the girls’ long, thin legs must be seen in the film) she is calm enough to wonder how her rear-end looks.

Lisa lies to the bronzed captain (a surprisingly effective cameo from Matthew Modine) about her scuba diving experience. He knows she is a novice and gives the sisters (and the audience) a warning about surfacing too quickly and getting the bends. Diving at depth produces nitrogen narcosis which can lead to hallucinations, a reversible state of consciousness that Roberts uses toward the end intentionally.

To disorientate the audience. The captain also tells them, and us, that when the pressure gage gets to 50 they have to come up. Lisa, who is nervously taking quick breaths, is warned that the faster she breathes, the faster she will deplete her tank. We store up this information the better to admire the myriad ways in which Roberts forces the sisters to breathe quickly during the remainder of the film.

When the sisters are submerged the standard 20 metres and surrounded by sharks they are awe-struck. Suddenly all of their cares vanish in this underwater wonder. Lisa is already writing a post card back home. But naturally, twenty minutes into a thriller, something’s got to give and some cinematic foreshadowing (before the girls go in, the camera focuses on the old boat’s pulley mechanism) has already indicated what it will be. If the wrench is past its sell by date, so is the rope.

The first of two equipment malfunctions sends the sisters tumbling to the bottom of the sea bed – 47 metres down. Though they are initially trapped, they are not seriously hurt. The sisters are no dummies although some of the lines (the script is by Roberts and Ernest Riera) are less than inspired. In fact both sisters, but particularly Lisa – the film focuses on her character arch – are incredibly resourceful.

This being a shark thriller, there are a lot of races against the clock, not all as formulaic as you might fear. The big race against the clock is to find a way up slowing without getting attacked or, as it later transpires, to await the dallying coast guard before the air in the tank is depleted.

At 89 minutes, four minutes longer than The Shallows, 47 Metres Down

is a fun, if much darker, summer popcorn movie. While it looks very real – and Moore and Holt are impressively convincing – the entire film was shot (by underwater cameraman, Mark Silk) in the underwater studio at Basildon, just 51 kilometres from London.