Home / LIFESTYLE / REVIEWS > / FILM REVIEWS / A tense, atmospheric and engrossing chiller, but is it just a big con? 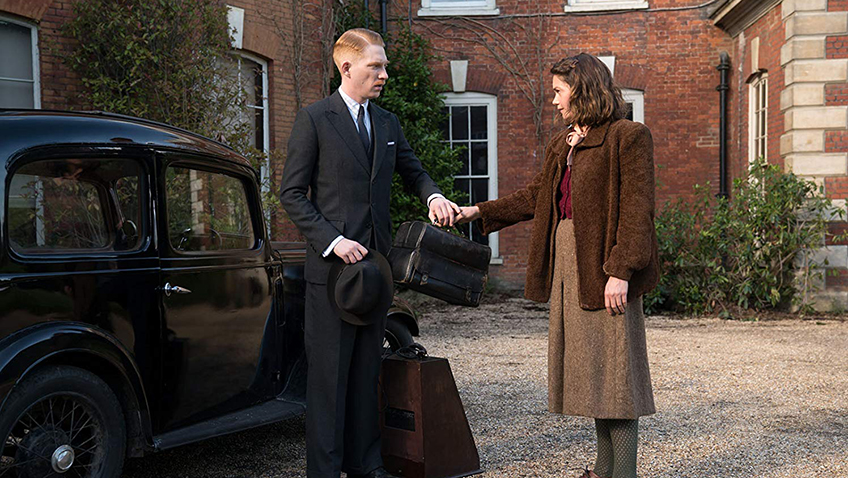 A tense, atmospheric and engrossing chiller, but is it just a big con?

England, 1948. The two World Wars are said to have changed the social hierarchy of the nation, but class divisions are too persistent for the characters in ‘Room’ director Lenny Abrahamson’s mystery drama The Little Stranger. His engrossing and increasingly creepy chiller, adapted by Lucinda Coxon from Sarah Waters’ novel

is faithful to the novel

, down to its enigmatic and frustratingly ending. 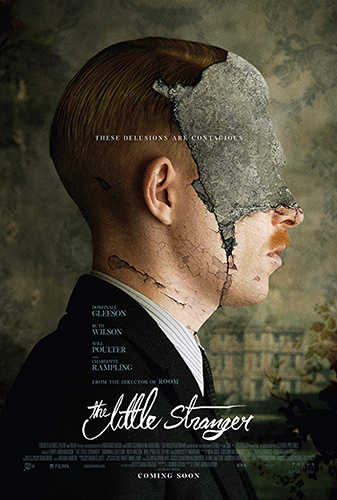 As Abrahamson demonstrated in Frank and Room is a focused director who knows how to create suspense. He tends to put his characters in confined, unhealthy buildings or rooms and, after watching them suffer, eventually gives them an opportunity to escape. In Frank and Room there were strange or evil characters responsible, while in The Little Stranger, supernatural forces might be at work.

In addition to bad luck, ill-health and strange happenings are sending the Ayres family of Hundreds Hall clear signals. Dr Faraday (Domhnall Gleeson, Brooklyn, Goodbye Christopher Robin), the level-headed, mild-mannered Oxford educated son of a former maid at the Hall, opts for a rational explanation and a logical approach to events.

The family’s bad luck started long before eldest and only son Roderick’s (Will Poulter) face was disfigured in battle and his was leg left all but useless after hasty surgery in World War II. The apple of Mrs Ayres’ (Charlotte Rampling) eye, pretty Susan Ayres, died in childhood. Faraday remembers Susan from a photo taken on Empire Day in 1919 in which she effaces his image, and from their only encounter.

As we learn in a flashback, it was not a propitious encounter. The boy is overwhelmed with the splendour of the grand house when he and his mother are invited to the Empire Day Fete, set in the huge garden. Being a curious lad, he sneaks into the house and is suddenly compelled to chip off a carved wooden acorn from a band of moulding on the wall. He is startled when Susan appears, asking him what he is doing there and sending him packing. 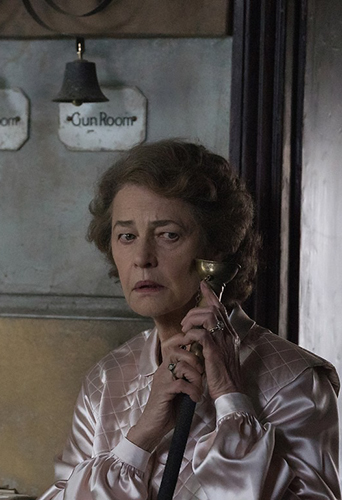 Charlotte Rampling in The Little Stranger

Faraday, a pale, thin single man in his thirties, has recently returned to his childhood village on the death of his mother, although throughout the film we hear about offers of employment in London. He has joined the quiet practice of Dr Granger (Harry Hadden-Paton) and when Granger is indisposed, is sent to tend to the Ayres family’s new maid in Hundreds Hall.

Faraday immediately notices that in the ensuing 19 years, the consequences of the war and of death duties have taken their toll on the declining house and cash strapped occupants.

After meeting Roderick and Caroline Ayres (Ruth Wilson) an attractive woman of Faraday’s age who does not bother with make-up, fashion or hair styles, the doctor turns to Betty (Liv Hill), the young maid. He is astute enough to realise that she is not physically ill, but is feigning illness in the hope of being sent home. Faraday covers for the girl, perhaps remembering his mother’s situation, but he attributes her condition to homesickness, discounting her hints at being frightened there. At the door, he receives a frosty reception from Mrs Ayres and mentions that his mother once worked there.

Faraday finds himself back at Hundreds Hall after giving Caroline a lift home, and, as though looking for an excuse to remain, Faraday offers to look at Roderick’s bad leg. As it happens, he is able to help correct the botched job done during the war, but Roderick’s PTSD remains so pervasive that he is continually unhinged

After a few weeks and a second meeting with Faraday in the village, Caroline invites him to a drinks reception at the Hall. When Roderick refuses to join the gathering, Faraday uses stern language to entice him, but Roderick, who mentions that he is selling part of the property, predicts something terrible is going to happen.

Returning to the salon, Faraday is aware of the social gulf, as are the guests, who are bemused to find him there. But even Caroline is not immune to a snide remark about her appearance from a snooty guest, an offense that is overshadowed by a terrible occurrence. The young daughter of two of their guests is mauled by the family dog and Faraday finds himself performing surgery on the kitchen table. 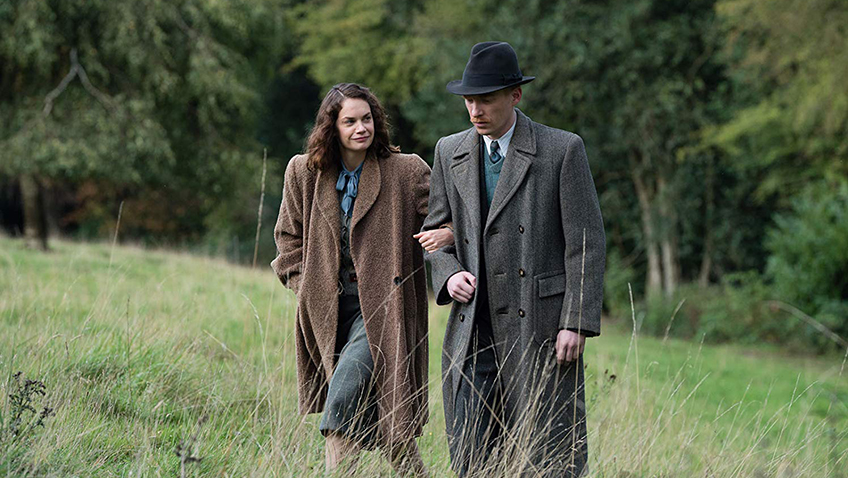 Domhnall Gleeson and Ruth Wilson in The Little Stranger

As the friendship between Faraday and Caroline develops into a social and then romantic relationship the strange happenings at Hundreds Hall continue. And so does Faraday’s interest in the future of the Hall. He is put in his place by Roderick when Faraday tries to intervene about the unfavourable deal behind the sale of property, but when a fire breaks out in the house and is attributed to Roderick, he willing goes to a mental facility and is out of the picture.

Despite this, Faraday’s social awkwardness and Caroline’s unease in his presence are noticeable. She continues to call him ‘Faraday’ as though he were not her date to a dance, but the chauffeur. While Faraday is reassuring a preoccupied Caroline that the ongoing supernatural happenings have a rational explanation, he is busy planning their wedding.

Remaining faithful to the novel

, Abrahamson keeps the tension rolling as he doles out one eerie incident after another, while at the same time, shifting our perceptions of the various characters. What is apparent is that Faraday’s attachment to the Hall cannot be explained by his caring profession or dedication to Caroline alone.

An old fashion Victorian Gothic drama in many ways, the solid script, taut direction and superb performances make The Little Stranger nothing if not compelling and atmospheric. While the last quarter of the film grows a tad trying, Abrahamson keeps us busy guessing until the abrupt and not entirely satisfying denouement.