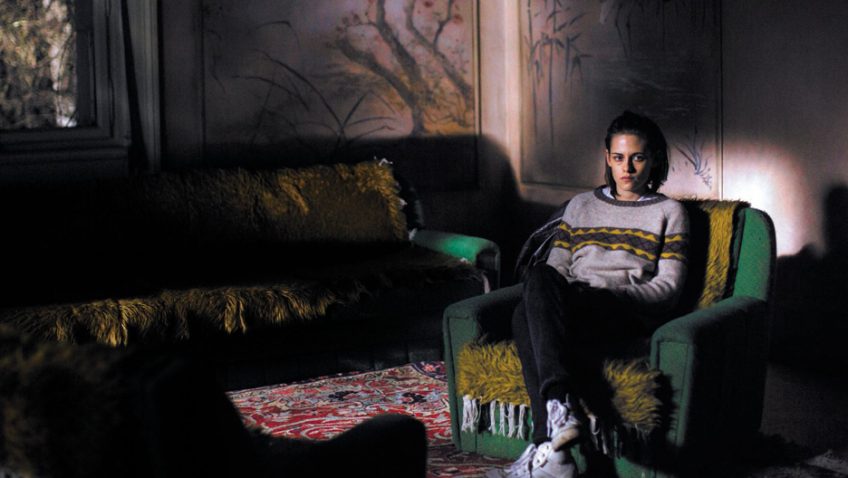 Kristen Stewart dazzles as a grieving twin with a gift, adrift in Paris

In an interview, 62-year-old French writer/director Olivier Assayas mentioned that he sat down to write a simple script for American ‘Twilight’ megastar Kristen Stewart. Stewart, who appeared in Assays’ previous English language film, The Clouds of Silas Maria, looks set to become his muse. Personal Shopper

is arguably Assayas’ best film to date (he shared the Best Director award at Cannes this year for the film) and certainly Stewart’s best performance, but the film might not strike you as simple. For within this psychological thriller is a bizarre three-pronged plot and, yes, some shopping – all presented through the atmospheric lens of the great cinematographer Yorick Le Saux (Clouds of Silas Maria, A Bigger Splash, I am Love).

You can tell by their names – Maureen (Kristen Stewart) and Lewis – that this American brother and sister were not born to trendy parents. Yet these twins are anything but typical. Lewis, a medium, ended up in their mid-twenties in France, where he married a French woman, Lara, (Sigrid Bouaziz) and then died of a hereditary heart condition that Maureen also shares. Lewis’s hold on his twin sister was, and remains, so strong that she has followed him to Paris where she is falling apart in her lonely, soul-searching grief.

In Paris, Maureen has taken a job as a personal shopper for a charity-minded celebrity named Kyra (Nora Von Waldstätten) while waiting for a sign. She despises the job, but the twins agreed that whoever dies first would send the other a sign. The question for Maureen – and for the audience – is how will she know?

There are three strands in the film, which might appear unrelated, but they all work together in the inexplicable way that life itself works. The first is the supernatural strand. Like in a basic ghost buster story, Maureen spends the night in the creaky, sprawling house that Lara is trying to sell. It’s straight out of a standard horror movie. There are doors banging open and shut, a female ghost (but Maureen reassures the couple that it is doubtful she will return) and taps that are running but were not left on. Still, Maureen is convinced these are not signs from Lewis. To the sympathetic couple interested in buying the house she utters, apologetically, ‘They say it’s extremely difficult to find a portal into the spirit world.’

The second strand is Maureen’s life as a personal shopper. Assayas brilliantly portrays the drudgery and stress (not what the doctor ordered) behind the glamorous job and shows us the Paris of someone who is not interested in sightseeing or museums. Dressed in her old jeans, a boyish oversized jumper or motorcycle gear, Maureen runs around Paris choosing expensive clothing (many loaned for show) and even picking up some jewels from Cartier that, as the salesman informs her, no one else will be wearing. ‘Oh, good, that’s important,’ Maureen says, as though she could not care less. In one shop, where the bill is 4,500 Euros for two bags and a belt, Maureen asks, ‘I have a blank cheque, is that ok?’ The one rule, although it would be the job easier, is that Maureen cannot try on the clothes.

The third strand is a murder mystery that shakes Maureen to the core, and not only because the police might suspect her. We might suspect Ingo (Lars Eidinger) a rather creepy German man who tells Maureen that he has been dating Kyra for two years, but she wants to dump him. He then adds, matter-of-factly, ‘She’s afraid her husband might find out.’ Despite this determination, he admits their relationship is purely sexual. When Maureen makes it known to Ingo that she is annoyed with Kyra for refusing to return a pair of leather trousers that were on short term loan, he offers her a job with a fashion magazine. ‘Not my thing,’ she says referring to the advertising, ‘they sell shit.’ They then enter into a conversation in which Maureen confides in Ingo about her life and her doubts about spiritualism. Ingo might also be the prime suspect in a bizarre and alarming series of text messages that Maureen starts to receive as she takes the Eurostar to London. There she buys a sheer black ‘dress’ that is worn over a revealing halter top (black or other colours). The stalker seems to be watching her, but she never sees him (or her). ‘Do you want to try it?’ he types before asking her to tell him something she finds unsettling. ‘Horror movies’ is her answer and also Assayas’ cheeky nod to a genre more British than French. The stalker replies, ‘It’s fear you find unsettling’ before arriving at the conclusion that she is unsettled by what is forbidden. Then Maureen sends an ambiguous reply. ‘No, desire if it’s not forbidden.’

These strands and incidents with them are united by a compelling tension and punctuated with references to theosophy, the spiritualist painter Hilma Af Klint (the subject of an exhibit last year at London’s Serpentine Gallery) and Victor Hugo’s two years of ‘table-turning’ in exile on the Isle of Jersey. Even the act of trying on clothes becomes ominous and unsettling. In a remarkable scene later on, Maureen removes all her unflattering clothes and is transformed into a thing of beauty when she tries on the forbidden black outfit. This prolonged scene is edited to a mid-19th century Viennese folk-song recorded in 1952 by Marlene Dietrich (who, like Ingo, is German). It is called Das Hobellied and in it, an ordinary man who dreads his critical wife, reminds himself that the leveller will cut down rich and poor alike.

Toward the end of the film, Lara tells Maureen that she has met someone new. Nothing in Maureen’s journey to a point where she, like Lara, can ‘move on’ is extraneous. Not the unresolved stalker texts or even a bizarre conversation about the 19th century obsession with séances that includes Victor Hugo of Les Misérables fame. Maureen complains about the slow, painful process of decoding messages in those days, through tapping letter by letter or one tap for yes, one for no.

For could it be that text messaging is simply a faster form of tapping on tables – and a more modern way of connecting with an unseen spirit? If you read the surviving messages that Hugo transcribed, they read like a series of text messages. One in particular might explain the eerie, poetic ending in a sun-drenched, exotic land where Maureen finally joins her boyfriend. Hugo laughed when transcribing a hoax exchange with the journalist Auguste Vacquerie, pretending to be the 17th century Spanish playwright Lope de Vega. The long exchange of questions and contradictory answers ends with the following: