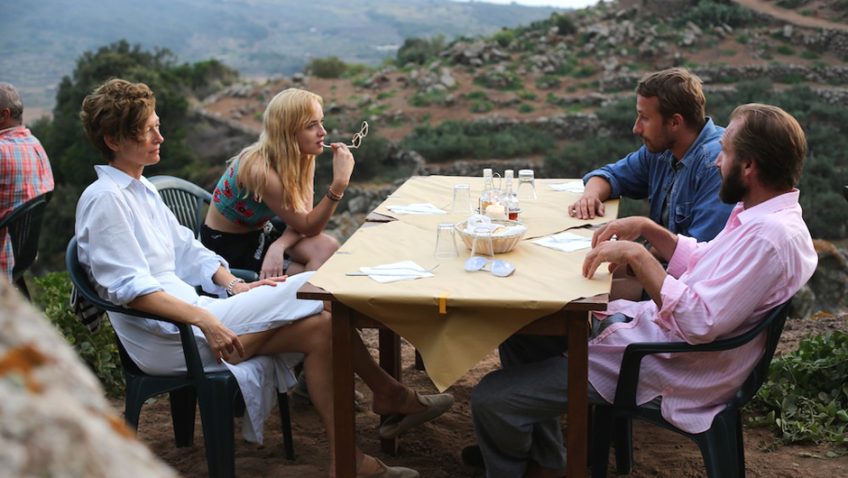 Luca Guadagnino is reunited with Tilda Swinton in another stylish and atmospheric film, A Bigger Splash

After their successful collaboration in the critically acclaimed I am Love, Italian director Luca Guadagnino is reunited with Tilda Swinton for the fourth time in another stylish and atmospheric film, A Bigger Splash

.  The loaded title refers not only to David Hockney’s homoerotic painting and to a documentary about Hockney’s break-up with his partner Peter Schlesinger; but to Jacques Deray’s famous 1969 film The Piscine (the Swimming Pool),  which has already inspired Francois Ozon’s 2003 The Swimming Pool.   But Guadagnino’s title is also a sly suggestion that if cinema is a deep reflecting pool, his version will add a bigger splash

Guadagnino, working from a script by David Kajganich, also makes the La Piscine his own, while adhering to the basic plot of Deray’s popular classic.  Moreover, while emphatically moving the setting from St Tropez, to the volatile Sicilian Island of Pantelleria, a landing site for refugees, Guardagnino adds a sobering, topical context to the hedonistic dalliances of the four well-off protagonists.  While A Bigger Splash

is a clever remake and an engagingly tense study of sexual love and possessiveness in its own right, the casting decisions that are the film’s strength, also make the story less than convincing.

While it is difficult to match the instant tension and sexual chemistry of the gorgeous couple in Deray’s La Piscine, the former real-life partners Alain Delon and Romy Schneider, it is hard to argue with Guadagnino’s casting of two of the most sensual actors around today, Matthias Schoenaerts (Far from the Madding Crowd, Rust and Bone) and Tilda Swinton (The Grand Budapest Hotel, Only Lovers Left Alive).  Even the age gap between the two only adds to the chemistry between the two actors that comes across on screen.

Guadagnino expands the under-written role of Marianne in Deray’s film turning Tilda Swinton’s Marianne into a rock goddess on leave from her sell-out concerts due to a career threatening case of laryngitis.  Marianne is with her filmmaker boyfriend Paul (Schoenaerts) who, as well as being a handsome hunk, is a grounding influence on the formerly wild rock star.  Paul is intent on providing Marianne with the rest, seclusion and sunshine her condition demands and the couple have rented a fairly inaccessible villa with pool on the Sicilian island of Pantellerina to assure her seclusion.

Ironically, the man who introduced Paul and Marianne was her ex-husband, the record mogul Harry Hawkes (Ralph Fiennes).  Harry is the unexpected guest who interrupts the couple’s serene and sensual days at the villa like a bolt of lightning in a cloudless blue sky.  Harry has apparently changed his mind and has arrived in Italy to reclaim his property.  He brings along his travelling companion, Penelope Lanier (Dakota Johnson), a bored, but self-consciously seductive teenager, whom he claims is his newfound daughter.  While their relationship introduces either or incest or sex with a huge age gap into the web of desire on offer, Harry seems more interested in Marianne than in Penelope.

Dakota Johnson and Matthias Schoenaerts in A Bigger Splash

With the help of the blazing sunshine, a high level of alcohol consumption and nude sunbathing, the tensions between the four characters develop, climaxing in a murder that serves as a hard-hitting commentary on the atavistic nature of sexual possession, morality and the class system.

The beauty of the film might seduce you, but some viewers might struggle with credibility issues.  Not the Italian detective’s (Corrado Guzzanti, excellent) willingness to consider the possibility that the prime suspect might be a desperate refugee, but in the central relationships.

Does anyone really believe that Paul would give in to Penelope’s clearly manipulative seduction when he has shown so little interest in her and has so much to lose?   It is pretty obvious that his sex life with Marianne is terrific and that Penelope is either getting back at Harry or using Paul for her own whimsical gratification.  Whatever the case, if Paul has succumbed to Penelope, he is almost as unsympathetic and insecure has Harry.

Even more unconvincing is the central relationship.  Fiennes’ performance has been praised, but it is also so over-the-top that it grows tedious.   We are supposed to appreciate that a part of Marianne longs for her former wild days, and that lifestyle is what Harry now holds out to her.  But what woman in her right mind would be seduced by the bombastic, uncouth, heavily-bearded, egocentric loudmouth Harry when they enjoy a relationship of equals with the mild-mannered, caring, incredibly sexy and handsome Paul?  Paul’s action at the end of the film is supposed to be a release of pent-up jealousy and frustration as the more professionally successful Harry fails to disguise his plan to repossess the woman he helped to make a star.

But Harry is a turn-off.  Even if Marianne longs for the old days it is hard to imagine she could not see through Harry and could still be attracted to him.  Harry’s selfishness and exhibitionism makes him such an unsympathetic bore that you might find yourself wanting to kill him yourself. Given the intentionally morally fudged ending, this might be the point; but it does not make the central tension anymore convincing.