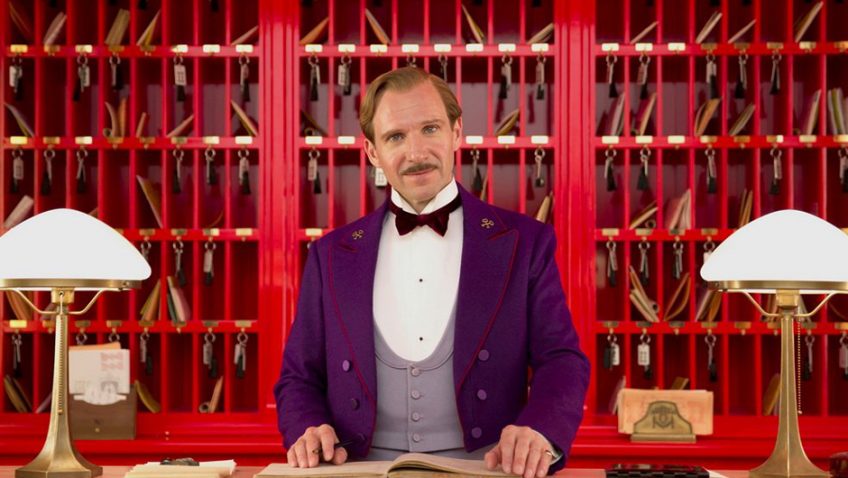 Writer/Director Wes Anderson has a distinctive style; he’s a visual fantasist who often puts style above all else. Still, he isn’t a Director you either like or don’t.  One’s instinct is to look forward to his next film for the delights they hold in store, hoping irritable self-indulgences will not consume them.

On the basis of the Life Aquatic with Steve Zissou, it would have been a shame to have missed the wonderful Moonrise Kingdom from 2012, arguably Anderson’s best film to date. If the star-studded The Grand Budapest Hotel

cannot rival Moonrise Kingdom, the action-filled caper is worth seeing for Anderson’s marvellous period architectural vision; his take on the onset of Fascism in Europe, and a virtuoso performance from Ralph Fiennes.

Based on the stories and memoirs of Viennese writer Stefan Zweig, the complex plot is an excuse to capture the picaresque adventures of the loyal, old school concierge of a glamorous European hotel as well as the story of the hotel itself, from its belle époque to the Communist era.  It is also an excuse to fit nearly everyone who has ever worked with Anderson into one film, so if nothing else, you can have fun trying to identify the famous faces.

The film is told in flashback. A young writer (Jude Law) visits The Grand Budapest Hotel in the alpine country of Zubrowka for inspiration. He meets, in its huge, rundown lobby, stripped of decoration and art in the 1960s, the owner: an old man named Mr Moustafa (F. Murray Abraham).  In the once grand Turkish Baths, the two arrange to have dinner in the depressingly empty dining room so that Mr Moustafa can tell the writer his incredible story.

The story is less about Mr Moustafa’s rise from trainee lobby boy to hotel owner than it is about Monsieur Gustave (Fiennes) its charming and impeccable head concierge.  There is nothing about running a top hotel resort that Gustave does not know. Tony Revolori and Léa Seydoux in The Grand Budapest Hotel

We see him flirting with the ladies, attending to whim of their husbands and inspecting each flower before it is placed in a vase. He decides to mentor the ironically diminutive (given F. Murray Abraham’s size) Zero Mustafa (played in the flashback by newcomer Tony Revolori) after he learns of the bungling orphan’s hard life.

When Madame D, an elderly widow (Tilda Swinton) and long-time hotel guest dies suddenly and leaves a priceless painting, the Boy with the Apple, to Gustave, it sets in motion a series of chase scenes that last for the duration of the film.  Realising that Madame D’s greedy, malicious son Dmirtri (Adrien Brody) intends to cheat him out of his inheritance, Gustave, on Zero’s advice, steals the painting (substituting a sexually explicit Schiele).

Dimitri retaliates by sending hired assassin Joppling (Willem Dafoe) and Captain of the Lutz Military Police, Henckels (Edward Norton, so great in Moonrise Kingdom) after Gustave.  But Gustave has his contacts, too, and even Henckels remembers Gustave’s kindness to his family when they holidayed at the hotel in his youth. Willem Dafoe and Adrien Brody in The Grand Budapest Hotel

There is a quirky love story between the young Zero Mustafa and a local baker, Agatha (Saoirse Ronan), but even her famous cakes serve a function in the story. So, too, do a group of actors including Anderson regular Billy Murray  who play members of the Society of the Crossed Keys. This is a group of top concierges across Europe who, with their extensive contacts, come to Gustave’s aid when he escapes (with Harvey Keitel’s help) from Check-Point 19 Criminal Internment Camp.

While the hotel was constructed, and the image of its exterior is a miniature built in the Babelsberg Studio, all the other locations are real buildings in and around the UNESCO World Heritage town of Görlitz in the heart of Eastern Europe.  The town’s inhabitants are extras and Agatha’s cakes made locally.

In addition to the unconvincing love story, some of Anderson’s attempts to be clever fail. Why bother subjecting Tilda Swinton to hours of hair and make-up when there are a dozen talented and genuinely old actresses who could have played Madame D better?

And the problem Anderson has with all his films save, the surprisingly touching Moonrise Kingdom, remains. His characters remain caricatures who fail to generate warmth, depth or empathy.