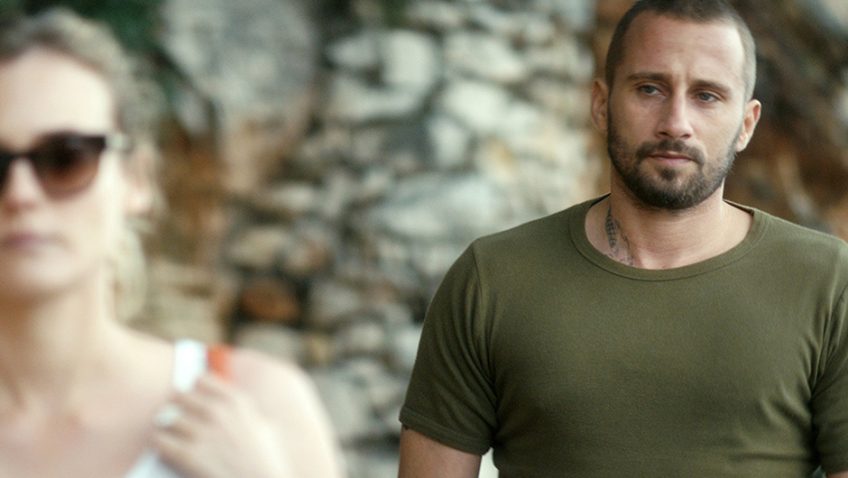 After his foray into English language films, Far from the Madding Crowd, A Little Chaos and most recently, A Bigger Splash, Belgium actor Matthias Schoenaerts co-stars in French co-writer/director Alice Winocour’s Disorder

is a taut, suspenseful home invasion thriller, like Panic Room and Funny Games, but one that is let down by a script that does not fulfill its potential. There are echoes of The Bodyguard, without Whitney Houston’s songs; and of Someone to Watch Over Me with some of the clichés of that film, but without the chemistry in that film between the bodyguard and his client.

An army doctor examines Middle East veteran Vincent who is suffering from hallucinations, insomnia and hearing difficulty. The doctor suggests that he might not be fit to return to the army – the only life he knows. With his nervous disposition, fiery eyes, close cropped hair and serious intensity (he smiles once in the film), the soldier reminds us of that more famous French-speaking Vincent who heard voices, forgot to eat and cut off part of his ear. But this Vincent is not the artistic type. He might be a handsome hunk, but he is also a trained killer with attacks of paranoia.

While Vincent and his army pals are providing security for a big party at a Lebanese businessman’s villa on the Riviera, Vincent begins to suspect that the shady host is an arms dealer with a few enemies. When the husband suddenly leaves on a business trip, Vincent is, rather implausibly, hired as a live-in minder for the trophy wife, Jessie (Diane Kruger) and their son Ali (Zaïd Errougui-Demonsant). Jessie is, understandably, annoyed at being left behind with a twitchy, imposing stranger.

Her anxiety grows when she asks Vincent to drive her and Ali to the beach. Oddly, they do not have a chauffeur. Vincent suspects that they are being followed by a black car and drives recklessly to shakes it off. Jessie is furious and forces him to stop so that she can drive the rest of the way. While sitting on the beach (curiously on such a hot day, neither Jessie nor Ali appear to go into the water), Vincent hears pounding in his head and thinks he sees suspicious onlookers. It seems that, rather than protecting Jessie, Vincent’s mental ‘disorder’ will put her and Ali in jeopardy.

It does not seem that way for long, however. On the way home, they are attacked and Vincent’s fast, professional response saves their lives. Curiously, Jessie does not apologize or even thank Vincent and they do not discuss the attack. Her reaction is so relaxed and unnatural that we begin to wonder: was Vincent imagining that?

They do however go to the police, which must surely prove that the incident was real. Vincent tells Jessie that the house will be under police surveillance, but that evening, when Vincent phones the police to check on a suspicious vehicle out front, he learns that the surveillance has already been lifted.

Instead of being outraged, neither Jessie nor Vincent appear particularly bothered. You begin to wonder: Are the police implicated in the attacks? Are they after Jessie’s husband? We never know and no one seems to care.

Similarly, when Vincent and Jessie return home to find the house ransacked and the two servants missing, Jessie does not seem the slightest bit interested in their whereabouts or in their fate. Instead of wondering if the servants quit or were kidnapped, Jessie and Vincent watch television together. We never even learn who the enemy is. Does this suggest that it is all taking place in Vincent’s shell-shocked mind?

In the final act of the film the slow burning tension is cranked up a notch with the full blown home invasion, elaborately orchestrated with thunder, an electricity outage and nifty sound design.

During the home invasion, Ali and Jessie are separated. A mother’s normal reaction would be to scream for her son whom she hasn’t seen since the attack began; but Jessie seems to have forgotten about Ali. This is yet another example of the unexplained, but curious behaviour that runs through the film.

The mystery of who hired the intruders is never solved, but it would be a spoiler to tell you why that is the case. We do not even know whether the invaders are after the husband or are there to kidnap his family. The real problem with Disorder

is that we never know if we are meant to attribute these unanswered questions to the fact that nothing is real or to an incoherent script?

The relationship between the two protagonists is equally ambiguous. You expect that Jessie’s cold and condescending attitude toward ‘the hired help’ is necessary to highlight the class differences between the two, only to gradually break them down. But if Vincent is physically attracted to the stunning trilingual woman, it is the attraction of any sex-starved military vet on leave from the front. We are never convinced that there is any basis to the relationship other than fear.

In one scene Jessie snaps at Vincent for studying her husband’s bank statements without any hope of understanding them. He retorts, ‘Why? Do you think I’m too stupid to understand them?’ With the camera focused on the word ‘chaos’ tattooed in large letters on his beefy forearm, we might just have our answer.