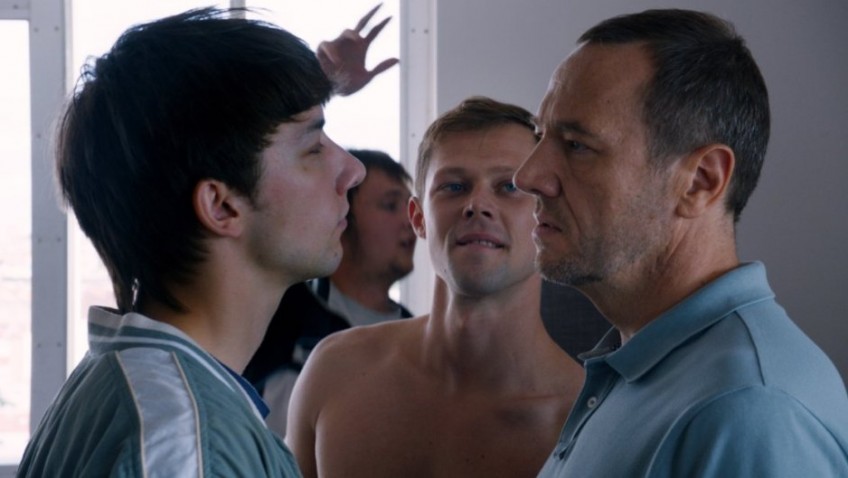 A pretty sensational if implausible film in Eastern Boys

, an unpredictable home-invasion thriller set in part in the sleazy underworld of Paris’ Gare du Nord, is certainly due, but it has to be qualified. Even those who will object to the implausibility of much of it have to admit that the first half of Eastern Boys

is pretty sensational and features what is arguably the most suspenseful, if not frightening, scene of the year. For years Robin Campillo co-wrote and edited films for director Laurent Cantet, but that fruitful relationship is probably now over. Eastern Boys

, Campillo’s second (after They Came Back) film as writer/director has marked him as an assured and powerful new French voice.

Dressed in an expensive suit and tie, fifty-something, professional Daniel (Olivier Rabourdin) looks conspicuously out of place prowling around the Gare-du-Nord. We have just been watching a gang of young men and boys congregating at the station before being dispersed by the police. They want to keep these pests away from the tourists.

But for Daniel it’s all about making contact. He finally spots a good looking teenager (Kirill Emelyanov), under the stairs and negotiates with him. Daniel wants to go to the boy’s hotel or lodgings; the boy, who says his name is Marek, insists on going to Daniel’s home. We are already foreseeing trouble, even if Daniel is not.

The following day, it is not Marek who shows up at Daniel’s well-appointed flat, but an obviously underage boy. If Daniel calls the police, the boy will tell them Daniel had tried to rape him. As Daniel stands frozen in shock, the rest of the gang file in led by the Boss (Daniil Vorobyov) a handsome, power-blue-eyed psychopath like Alex in A Clockwork Orange. He speaks English and French as though he has been educated and switches on a dime from a charmer to a lethal weapon. In Vorobyov’s convincing performance, it is the Boss’s eyes that are terrifying.

To summarise the plot further would be to ruin the suspense; but suffice it to say that a volatile relationship develops between Marek and Daniel that is as uneasy and ominous as it is heart-warming.

To understand Daniel’s frustrating passivity in the face of the events that befall him, we have to accept that he is truly afraid of police involvement for fear of compromising his reputation.

What is more difficult to accept is why Daniel needs to pick up strange Chechen boys in train stations and why he does not have a lover or even any close friends. We see him at a co-ed dinner party, but that seems to be the extent of his personal life. When the action shifts to the hostel in which the gang resides, the film becomes far-fetched to the point that it strains credibility. Moreover, what is first called a store room to which the Manager has a master key is suddenly called a bedroom and the hotel manager cannot enter it at a critical moment. We are also left wondering why Chechen gangs are put up in hotels paid for by the French social security and allowed to carry on illegal activities unsupervised.

Campillo wrote the scripts for the acclaimed director Laurent Cantet’s films, including the brilliant Time Out and The Class. He knows how to construct a plot based on real events and how to build tension. What is less in evidence here is character development. Campillo’s non-judgmental compassion for Daniel and Marek is commendable, but it is difficult for the viewer to feel the same until the very end, given the volatile nature of the relationship. This is perhaps intentional, so that Daniel’s leap of faith is all the more admirable. Like Daniel, we do not know whether or not we can believe Marek’s story about his life in Chechnya.

At the beginning of the film, as we watch the boys meet on the forecourt of the train station, we see the departing and arriving passengers pass them by without a glance. They are oblivious to the human slavery that forces the boys, like a modern day Fagin’s gang, to work as thieves and prostitutes. Only one of these boys becomes a human being to us, but that is one more than before. The next time you walk through the Gare du Nord you might find yourself looking around and seeing more than the taxi file or the underground sign.