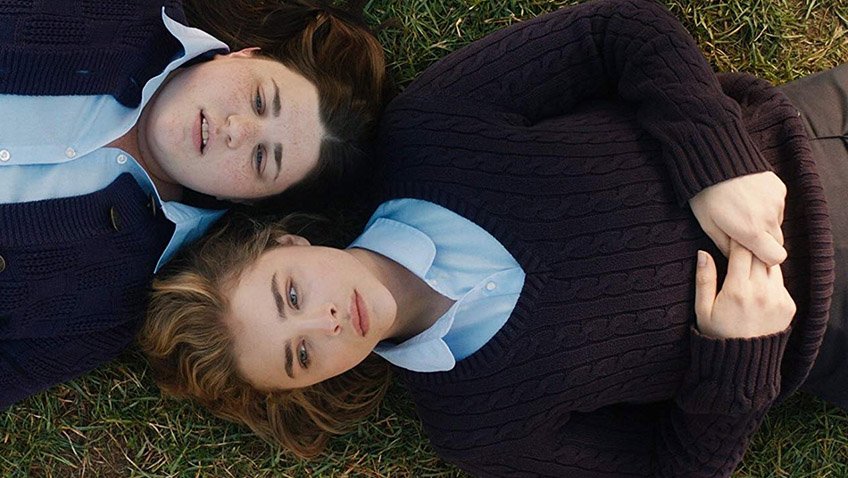 Dramatically disappointing, the film is effective in reaching teens grappling with sexual identity

A cross between Girl, Interrupted and One Flew Over the Cuckoo’s Nest, complete with Jennifer Ehle as the Nurse Ratchet equivalent, Desiree Akhavan’s gay coming-of-age comedy/drama differentiates itself with a topical edge. Here, the mental illness that needs to be cured is an attraction to the same sex and the inmates are young enough to be reformed and released. The Miseducation of Cameron Post

might be a blunt instrument, and curiously devoid of tension or doubt, but it is effective in reaching, and reassuring, its core young adult audience. What a shame, then, about the 15 certificate. The children in Emily Danforth’s novel

on which the film is based are under 16 and won’t want to be seeing the film with their parents.

The subject might even pick the curiosity of the older residents of America’s Bible Belt because 22 years before same sex marriage was legalised across the USA, things were very different. The film is set in 1993. The Aids epidemic is raging, there is no gay cinema to speak of; there are no social media platforms or even mobile phones. America would have to wait until 1996 to see the controversial lesbian marriage (but no kiss) episode of the TV show Friends. And these are adults.

In an early scene we see Cameron and her best friend Coley (Quinn Shephard) having sex in the back of the car when their respective Prom dates are otherwise engaged. The religious aunt of orphaned Cameron Post (Chloë Grace Moretz) is mortified. She sends her charge to a sexual conversion camp called God’s Promise.

At God’s Promise Cameron comes into contact with various misfits who are told that ‘sin is sin’ and ‘there is no such thing as homosexuality.’ The villain is God’s Promise director and resident therapist Lydia (Ehle). Her brother, the formerly-gay convert ‘Reverend Rick’ (John Gallagher Jr.) might be Lydia’s enforcer, but he, too, is a victim. From the moment Lydia proudly points out, ‘Rick did the work: he was able to overcome his own illness,’ we are never convinced of it, despite Rick’s apparently happy relationship with Bethany (Marin Ireland).

Life in the retreat is much like life in any film about religious boarding schools or bad mental health facilities. There are random late night checks to ensure that no one is in the wrong bed and the strict, dehumanising routine that we saw most recently in Steven Soderbergh’s film Unsane. 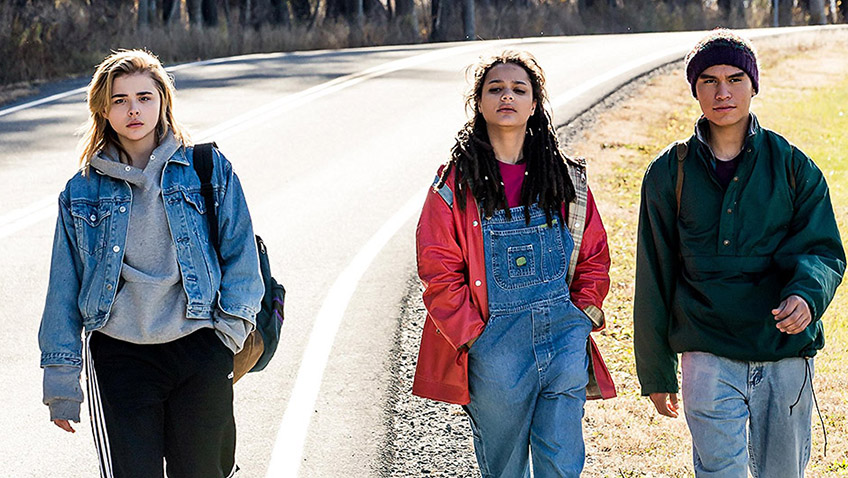 Cameron bonds with with Jane Fonda (Sasha Lane, American Honey) who looks nothing like her namesake and stores marijuana in her prosthetic leg. Jane’s best pal is Adam Red Eagle (Forrest Goodluck), a handsome, androgynous Native American. The only threat to Cameron comes from her ‘converted’ roommate Erin (Emily Skeggs) who has convinced herself that she has a crush on ‘patient’ Mark (Owen Campbell) when she seems to have a crush on Cameron.

In a stylist, short sequence we see how some of the inmates arrived at God’s Promise and it becomes obvious that it is the parents (will any parents who have who need to be re-educated. This is the central irony of the film but it comes as no revelation to an audience in 2018. Nowhere is this more apparent than the dramatic scene in which a patient looking forward to his release attempts suicide after he learns that it is his father who does not think he is ready to leave the facility. 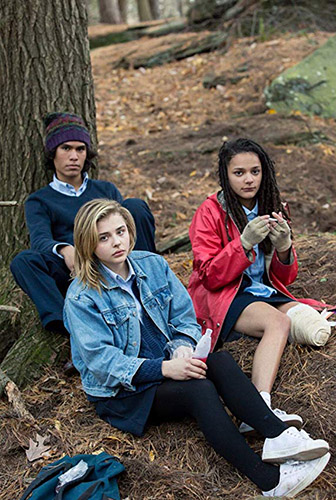 Director and co-writer Akhavan and co-writer Cecilia Frugiuele see Cameron as a strong character and an outside observer to the horror of a place that tries to recondition gay children to repent their same sex attraction. The danger here, from a dramatic point of view, is the absence of suspense and character arc. Cameron never has any self-doubt, never seems at risk of brain washing or of suffering the tragic identity crisis of many ‘patients’. She, Jane and Adam, are left alone in a kind of bubble of rebels. Conflicts such as Erin, do not last long and Cameron, who is a clever listener, even breaks down Reverend Rick.

And then she turns therapist herself. After the suicide attempt, there is an official inspection to see if any of the children have been physically abused. Cameron, angered and upset over the event, highlights another kind of abuse. ‘How is programming people to hate themselves not emotional abuse?’ she asks rhetorically.

If Sasha Lane is wasted here in an underdeveloped role, this is not a milestone for Chloë Grace Moretz’s either. Moretz, who was 20 when she made this film, has been attached to far more controversial films. At 14 she played a vigilante assassin in the Superhero black comedy/drama Kick-Ass; a supernatural prom queen with blood on her hands in the remake of Carrie, and a teenage vampire in the adaptation of the acclaimed novel Let Me in

(based on the Swedish film Let the Right One In).

The character of Rick brings to mind the film, I am Michael the true story of a gay rights activist who turns straighter than straight – with an equal number of questions left unanswered. The ending to The Miseducation of Cameron Post

is reminiscent of both the ending of The Graduate and of Andrea Arnold’s film euphoric American Honey, where the fate of the young people starring out of the back of a vehicle in silence, is left up in the air.