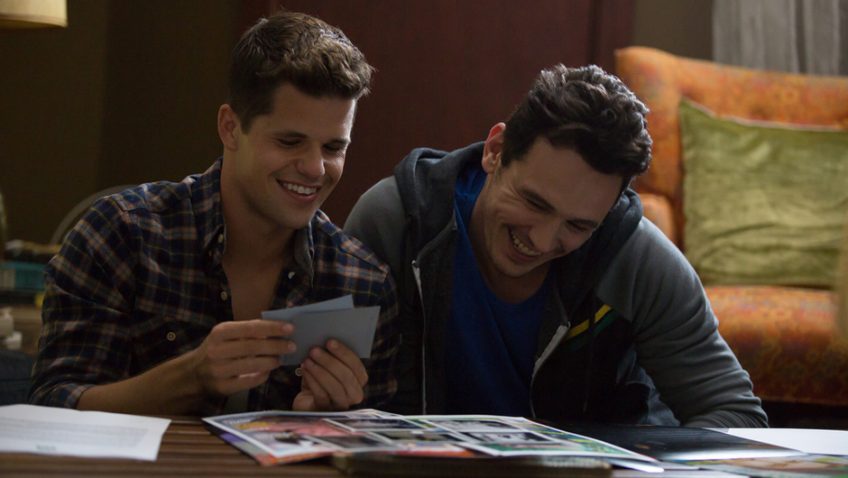 Over the past year, the conflict between gay rights and Christian rights has made the headlines on both sides of the Atlantic, sparking widespread debate. A Texas baker refused to make a wedding cake for a gay couple because their marriage went against her Christian beliefs. In Cornwall, a B&B couple refused a room to a gay couple who sued for sexual discrimination. Although both Christian defences lost in court, the defendants are unrepentant. Co-writer and first-time feature director Justin Kelly has entered the debate with a maddeningly even-handed objectivity to tell the true story of a prominent gay activist who renounces his homosexuality to become a Christian Pastor. Fans of James Franco will not want to miss this one.

The film begins in 2008 with a chilling prologue in which Michael Glatze (Franco), now a Pastor, tells an anguished young man that being gay is a false identity. The conflicted youth tries to tell Michael that he has no choice. The Pastor tells him he always has a choice: to choose heterosexuality in order to be with God.

Then we flash back to San Francisco ten years earlier. From here on, the film is divided into a modern day BC and AD. The BC half describes Michael’s life before his spiritual awakening at age 29, the apparent result of a health scare in which he thought he was dying of the same heart disease that killed his father when Michael was 13.

In 1998 San Francisco Glatze is Editor of XY Magazine and a spokesman for gay rights. He is in a happy, stable relationship with Bennett (an excellent Zachary Quinto) although they form a manage à trois with younger student Tyler (Charlie Carver). They go to raves, take the drug Ecstasy, and then, in May, 2000, move to Halifax Nova Scotia for Bennett’s work. A year later the trio travel across America to make a documentary about gay teenagers and Michael starts a new publication, YGA (Young Gay American). At this point we hear Michael tell Bennett that ‘the whole gays-will-go-to-hell thing misinterprets the Bible. God doesn’t care what your sexual orientation is. And with this conflict on his mind, Michael dedicates the next issue of YGA to ‘The God Issue’. James Franco and Zachary Quinto in I am Michael

Michael’s gay years are presented as a sequence of quasi-montages in which we are presented one cliché after another reinforcing how we imagine gay men live. Michael and Bennett do come across as an articulate and loving couple (although how Tyler affected this bond is never discussed.

Then comes Michael’s panic attacks, which ushers in the film’s second half, AD. Kelly presents the transformation as something more gradual however, and the turning point could be when Michael sits at his computer and types the words: I am straight. He then types: Homosexuality = Death. When the doctor assures him he is not dying of his father’s heart condition, Michael begins a long, anguished process (even dipping into Buddhism) of attempting reconcile God and homosexuality. To do this he decides to leave Bennett and Tyler. ‘I need to get away from this life,’ he tells a heart-broken Bennett. ‘I just want to be with my parents in heaven.’
In 2007, he renounces his homosexuality and enrols in Bible School in Wyoming.

Kelly presents all this in an even-handed and non-judgmental manner which is fine if you are making a documentary, but here the approach tends to create an emotional void. Franco’s portrait of a lost man grappling for his conscience, his intellect, his fears and with his sexuality to the point where he proposes marriage to Rebekah Fuller (Emma Roberts) is fine, but you might find it hard to sympathise with him.

In keeping with this approach Kelly offers no clue, other than the turning points mentioned by Michael and included in the film, for this shocking 360 degree turn. While those who believe that homosexuality can be cured with a good therapist and a pill, Michael is a Godsend, but modern medicine holds that there are biological forces at work that cut through the nature vs. nurture debate. James Franco and Emma Roberts in I am Michael

And what about the young gay men who looked up to Michael and whose lives he may have saved? The reaction to Michael’s ‘coming back in’ is suggested by the headlines, including, ‘Straight to Jesus?’ and ‘Can Gays go Straight?’ This being a drama, however, there is no priest or psychiatrist on board to answer these questions. Ironically, the problem could be that the story is told through Michael’s eyes, and Michael is not showing us the whole picture.

The film is based on Michael’s friend Benoit Denizet-Lewis’ New York Times article, ‘My Ex-Gay Friend,’ but a lot of character-based information is omitted that might have allowed Michael to emerge as a more tragic, or interesting person/character. Benoit, who interviewed Michael (in Wyoming where he had settled after Bible School) and Bennett for his article, writes: ‘though only a year [out of] Dartmouth [University] when he arrived at XY, Michael had seemingly read every gay book ever written….he was busy contemplating queer theory, marching in gay rights rallies and…devoted to helping gay youth.’ Was Michael an ideologue with a cause?

Benoit wonders whether the Christian conversion was merely Michael exercising the flip side of his evangelist personality. Bennett agrees. ‘A radical queer activist and a fundamentalist Christian aren’t always as different as they might seem.’

In his article, Benoit also wonders whether Michael was trying a bit too hard to isolate himself from temptation: For an ex-gay intent on staying that way, there are few safer places in the world than a Bible school in Wyoming. The country’s least-populous state — where Matthew Shepard [a 21-year-old gay man] was murdered and left to die on a rural fence post, and where two fictional cowboys fell in love on Brokeback Mountain but never allowed themselves a life together — is also a state without a gay bar.

It is a shame that Benoit’s speculations do not their way into the film. Far from depriving it of a fictional emotive core and singular point of view, they might have made this complex character more fathomable.