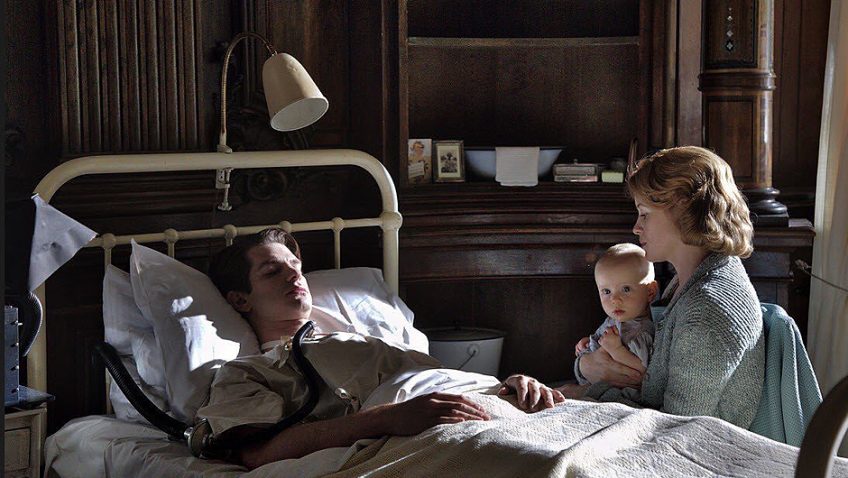 This true story of a disability hero is inspirational but relentless

Any review has to ‘spoil’ this film as the spoiler, and the most dramatic, terrifying minute in the film, happens within the first ten minutes. A romantic montage set in storybook England, 1957, shows a handsome, dashing military Captain, Robin Cavendish (Andrew Garfield) win over Diana Blacker (Claire Foy), the most beautiful girl at a polo match. The couple marry and move to his tea plantation in Africa. If tragedy had not cut short this idyll, of course, the world would never have heard of Robin Francis Cavendish (1930-1994): the defiant, pioneering disability advocate and co-inventor of liberating equipment. Breathe

, actor Andy Serkis’s worthy directorial debut, tells a remarkable and inspirational story, but as a film, it is a one-movement symphony with one resounding note.

In 1958, young Captain Cavendish (Garfield) leaves the army to co-run a tea plantation in Kenya. When Diana (Foy) announces she is pregnant (with Breathe

’s producer, Jonathan) life couldn’t be better. And then, at a British Embassy party in Nairobi, the unbeatable Cavendish loses a tennis game to gentle jibes. Within hours he has trouble walking and no one is joking. Rushed to hospital, he is put on a respirator and given a diagnosis of irreversible polio and a few months to live.

Always a lucky, guy, suddenly Cavendish is unlucky in the extreme as polio normally strikes young children and only 1 in 200 people with polio infection suffer permanent paralytic polio. Cavendish is soon paralysed from the neck down and will not improve. The couple move back to the UK in 1960 where doctors are conservative or even backward thinking and patients like Cavendish vegetate in depressing wards, left to die with only palliative care.

Cavendish wants to die to liberate his 25-year-old wife, but Diana is fighting furious and sets about devoting her life to keeping her husband alive. She realises that the first step is to get him out of the Victorian hospital, and so she raises the money to buy an impressive country pile. The move infuriates the head doctor whose warning cries, ‘you’ll be dead in two weeks’ are already discredited by the fact there is still some 85 minutes to go in the film. Supportive friends, who include Diana’s twin brothers, Bloggs and David Blacker (Tom Hollander, providing comic relief) and Oxford professor and inventor Teddy Hall (Hugh Bonneville), rally around Cavendish’s bedside. He can speak, with difficulty, through a tube, and they all seem to be having a jolly time. Really?

By 1962, Teddy and Cavendish develop a wheel chair with a built-in respirator that they continue to refine. For most of the film, we follow the Cavendish family as they make the most of Robin’s relative freedom. They travel, first in the UK and then abroad. Teddy even rigs a plane and then, in Spain, a van, so that they all travel together, although curiously, the scenery abroad look a lot like the scenery at home.

While Serkis presents these outings as holidays, complete with gypsy guitars, for Diana, they must have been more stressful than remaining at home where less can go wrong. Something major does go wrong in Spain, but on the whole, Serkis feeds us a steady diet of cheerful family scenes and sunsets over monumental valleys.

During this period we see Cavendish fund raising and a bravura moment when patients at his old ward parade outside, each with his own wheel chair. His advocacy culminates in a dramatic entrance and in a rousing speech at the 1973 World Conference on Disability Living in Germany. It is one of those ‘Scent of a Woman’ speeches when you think of Academy Awards Ceremonies more than Conferences. There is, of course, satisfaction built into a film that shows its protagonist defying his doctors by prolonging his life and improving its quality. But the drama, which is episodic in nature for most of the film, has to be created in random scenes (as when the dog pulls the respirator plug out of the wall and Diana is in the kitchen) as this life rolls on for 36 years. And if Serkis takes his characters through time on the uplifting wings of human resilience, for the audience it can feel relentless.

William Nicholson, with inspirational and ennobling, biopics such as Grey Owl, Shadowlands, Mandela: The Long Walk to Freedom and Unbroken under his belt was an obvious choice to write the script. He alone can ensure that we cry at the ending for nearly as long as we cried over Joy Gresham’s bed in Shadowlands.

Garfield, who made his name in The Social Network and The Amazing Spiderman 2, was deservedly nominated for an Oscar for his astonishing performance in last year’s Hacksaw Ridge, and is Broadway bound with the lead in the National Theatre’s revival of Angels in America. He is limited here by his character’s physical restrictions but does all he can to turn a cause into a character.

The big problem here is that he is the only character and even then we are not privy to his thoughts. No other character is even given a life, however, as all lives revolve around Cavendish’s. Did none of their circle of friends ‘drop off’ the radar when the parties proved more like pilgrimages than entertainment? How did the family support itself? What was it like for Jonathan living as a carer in the shadows of his father? With Jonathan producing, these issues and many more are unlikely to surface.

Still, there is no avoiding the Diana question. There isn’t a woman in the audience who can believe that in 36 years of being a full time nurse: changing her husband’s nappies, administering medication, feeding him round the clock and doing all the chores without real holidays or sexual relations, Diana not only kept the romance going, but never broke down. At the disability conference in Germany Cavendish introduces his wife as the person who refused to let him die, but she remains in the wings beaming at her husband’s standing ovation.