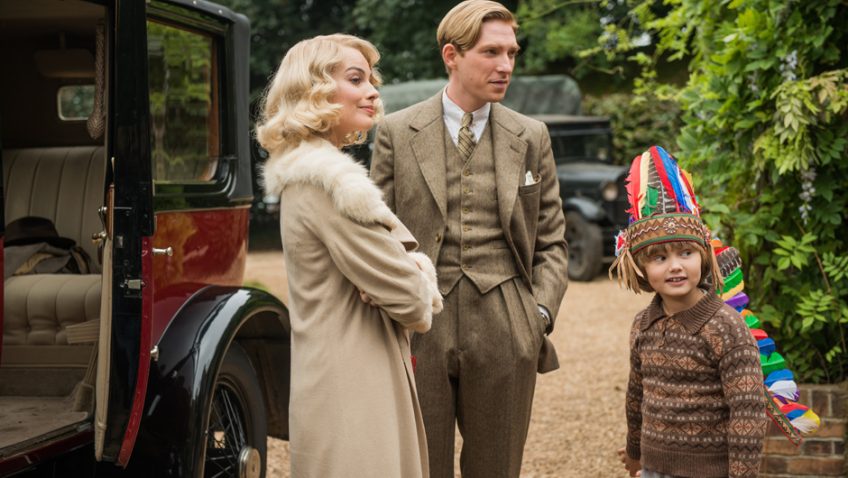 Captions at the end of this biopic of AA Milne and his famous son, Christopher, tell us that Winnie-the-Pooh, published in 1924, is the most popular children’s book of all time. Such is the book’s international appeal that the original toys that inspired the book are still on permanent display in the New York Public Library. Despite the popularity of the picture book (and its 1928 follow up, The House at Pooh Corner) few of us know much about the life of the author and his real-life son. So if you have not read Ann Thwaite’s definitive biography of A.A. Milne

, the sad and ironic story behind the books is reason enough to see the film. If you have read the biography, Simon Curtis’ conventional British biopic will leave you with little but a wet hankie.

Don’t let the sun streaming through the perfect green forest (caption: Ashdown Forest, Sussex, 1941), and a pretty woman tending a beautiful garden in front of a picture-postcard country house fool you: Goodbye Christopher Robin is a dark story about a father-son relationship gone wrong and the high price of fame.

Alan Alexander Milne (Domhnall Gleeson) might have been happy writing successful high society plays for London’s West End for the rest of his life with his glamorous wife, Daphne (Margot Robbie) as his social secretary, but for two factors. The first is that he suffers from post-traumatic stress disorder from W.W.I, and if loud noises affect him mentally and physically, his need to write a hard-hitting book to end all wars preoccupies him intellectually. That book (Peace with Honour) will have to wait as war-weary Europe wants to party and forget. While Daphne seems even less happy giving birth to their only child than she is about leaving London, she creates a pretty garden in their country cottage and delights Christopher (who answers to the name Billy Moon) with her voices for the soft toy animals she gives him.

The second factor is that Milne, who did not care for children, has one, even if the couple needs a live-in nanny, Olive (Kelly Macdonald) to bring him up. Handling the passage of time is not Curtis’ strong suit here, but it seems that Milne was left alone for two weeks with 8-year-old Billy Moon (chubby cheeked Will Tilston), when Daphne, fed up with the bucolic countryside, goes off to London and Olive goes off to a sick mother. 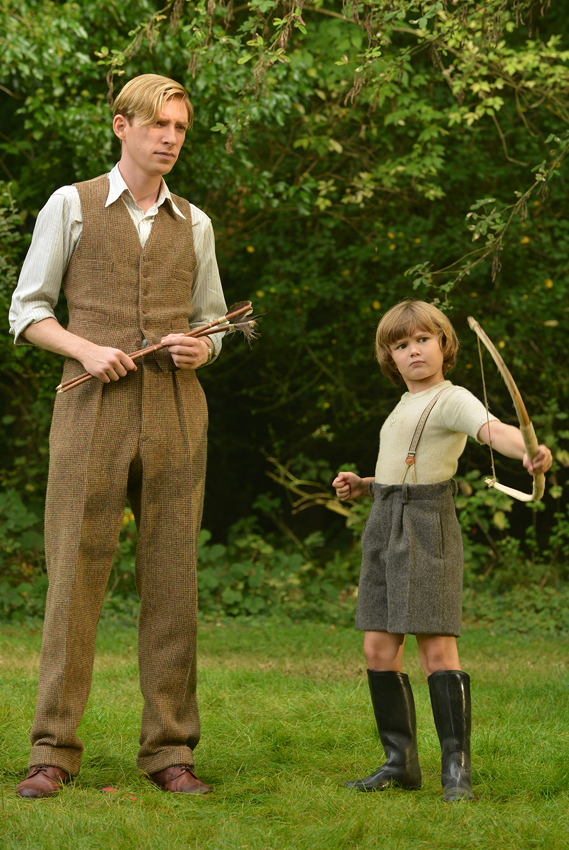 Domhnall Gleeson and Will Tilston in Goodbye Christopher Robin

After an awkward couple of days, the shell shocked man and the boy, frightened by his dad’s unpredictable outbursts bond during long walks in the woods with the stuffed bear. We are meant to believe that in this short time they create a magical, anthropomorphical world all their own that is the basis of the Pooh stories. Script writer Frank Cottrell Boyce (Michael Winterbottom’s main scriptwriter, 24 Hour Party People), who is an author of children’s books himself, imagines how the animals were named which tells us little. More interesting, Milne brings along his war buddy Ernest (EH Shepard, Steven Campbell Moore) to sketch in situ. It does not appear that the filmmakers had the rights to use the original illustrations, the poem that Daphne has published without, we are meant to believe, her husband’s knowledge, or the text from the books, but the books, at least, are so well known it does not really matter.

What we do miss is more interaction between author and Illustrator (Shepard went on to illustrate the Wind in the Willows, so he may be in the running for a biopic himself), but Curtis admirably sticks to the film’s focus and gets on with the deterioration of the father-son rapport in the aftermath of the book’s publication.

JK Rowling is the only modern children’s author whose fame and financial success are equivalent to AA Milne’s 90 years ago. She famously wrote the first Harry Potter

book in a café with her baby in a pram, but despite the invention of digital media, she has kept her child out of the limelight and remains a relatively private person. To say that Milne and Daphne were not prepared for fame and did not understand its impact on their son is an understatement. Billy Moon is dragged to all the PR events until his face and name are so well known that when he is sent to boarding school, he is bullied and has no friends. That said, one of the oddities of the film is that Billy Moon never seems to have had any friends, even before the books were written.

When, as Milne predicted, the war to end all wars begins another, teenage Christopher has his revenge and enlists, ironically, using his father’s fame to override a physical disqualification. From this point on, it’s handkerchief time. A miscast Alex Lawther plays Billy Moon as a miserable teenager who longs for anonymity as a private in the army, much like T.E. Lawrence after Arabia. 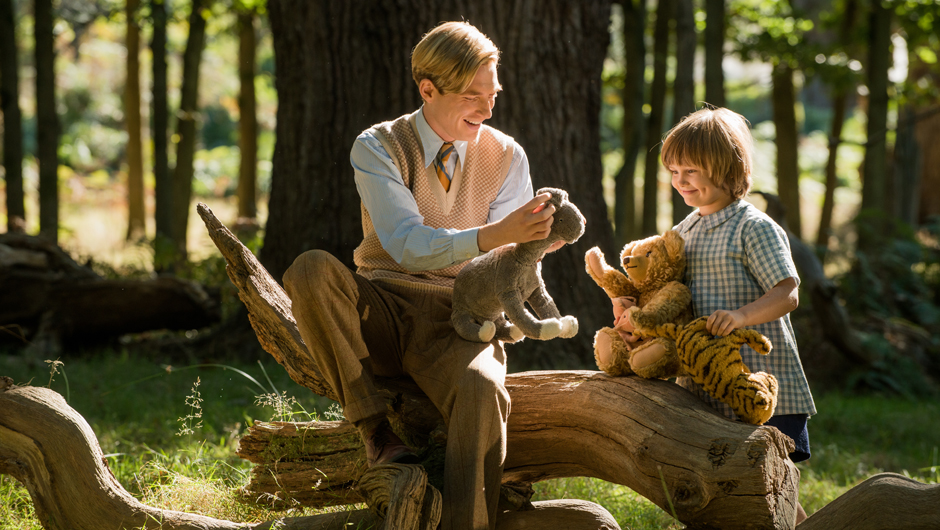 Domhnall Gleeson and Will Tilston in Goodbye Christopher Robin

Simon Curtis, (My Week with Marilyn, Woman in Gold) who makes sunny biopics about dark subjects, refuses to go dark on us, despite his willingness here to tell the less- than-admirable truth about his famous subjects. Still, we do not really understand how the Milnes could be so blind to the repercussions of all the attention on Billy’s life when the nanny, Olive, sees it so clearly. Nor can we work out what was wrong with Daphne that she is so cold and cruel (to Olive in particular), but provides Billy Moon with so much playtime pleasure. In any event, Robbie’s performance is so uninspired it provides few clues.

As well as some lacklustre direction, Curtis does not seem to mind the terrible ageing job done on Gleeson and the failure to make Daphne age at all. Nor, evidently, does the expository dialogue at the end, which sounds like Billy Moon is writing his father’s obituary (‘you reminded people what happiness and what childhood was.’). The problem with this fair assessment is that the childhood was Alan Milne’s, which we do not see and know nothing about. When Billy Moon reassures his father that he had ‘a splendid childhood, growing up was hard’, we wonder if anything about his life before 1920 was happy let alone splendid.

Of course Milne did remind people what childhood was like, with the help of Shepard’s endearing illustrations. The adult Christopher recognizes his father’s great achievement, one that would be selfish to wish to reverse. Curtis and Boyce nonetheless leave us with the irony that what the family so joyously welcomed as good fortune brought so much sadness.