Home / LIFESTYLE / REVIEWS > / FILM REVIEWS / ‘If you can take it, you can make it’ in Angelina Jolie’s direction of Unbroken 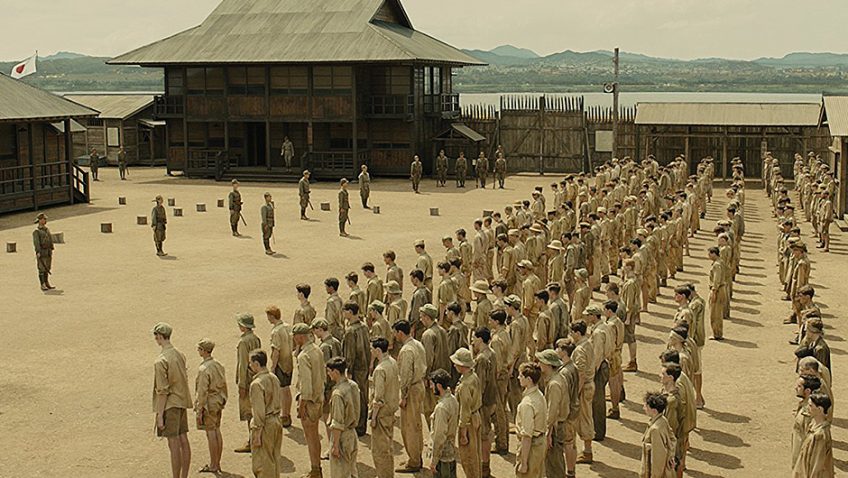 ‘If you can take it, you can make it’ in Angelina Jolie’s direction of Unbroken

is a worthy biopic about the Olympic gold-medal runner turned war hero Louis Zamperini, who died just before the release of the film. The title of Laura Hillenbrand’s biography on which the script is based says it all: Unbroken: A World War II Story of Survival, Resilience, and Redemption

These abstract nouns are buzz words for noble deeds in war movies.  Unbroken

ticks so many boxes, in fact, that it feels hackneyed, despite a script by some of the best writers in the business.  And while Jolie puts the audience through the ringer along with Zamperini in a convincing manner, the ordeal feels a lot longer than the already-long running time.

Apart from a terrific bomber fight in the air that opens the film, the action is divided into three distinct parts, with a few flashbacks from the army to Zamperini’s running career.  Part One is youth and running; Part Two is survival at sea, and Part III is survival in a Japanese POW camp.

Bullied at school, the Italian immigrant’s son (CJ Valleroy as young Louis) refuses to tell his parents why he is caught fighting and lands in the headmaster’s office.  Louie’s brother Pete (Alex Russell) might see that it’s a question of self-esteem and encourages Louie to join the track and field team at school.  Pete’s motto, ‘If you can take it, you can make it’ really hits home, and eventually Louie heads for the 1936 Berlin Olympics where he wins gold.

But Louie’s hopes of winning more gold are dashed by WWII.  He becomes a popular Bombardier (or bomb aimer) and, when his plane crashes – which we know it will be from the script’s unsubtle foreshadowing – he is one of only three survivors.  Louie, and his close mate Phil (Domhnall Gleeson) survive in a life raft for a record 47 days and again, foreshadowing tells us they will beat the previous record.  When they finally see a ship they are weak from malnutrition and just barely alive.

Not a good moment, then, to be found by a Japanese war ship and carted off to a POW camp. This camp is similar to the one where Colin Firth was tortured in last year’s The Railway Man, complete with its psychopathic Japanese Corporal.  Mutsuhiro ‘The Bird’ Watanabe is an androgynous ego in a uniform that needs a good therapist much more than a good war. That The Bird is played by the popular Japanese musician and record producer Miyavi is clever casting, as it might help attract a Japanese audience.

Louie is offered a life of luxury in Tokyo in exchange for reading propaganda across international radio, but, a true patriot, he nobly refuses, and is returned to a new POW camp.

At the new camp he is forced to dig for and then haul heavy containers of coal onto ships for the Japanese war effort.  Coincidentally, his new overseer is The Bird, who has received a promotion and is all the more intent on singling out Louie for torture.

Many writers, directors and producers have made the mistake of assuming that, with the right cast, any good true story will make a good film.  Unbroken

is a case in point.  If the combined efforts of Joel and Ethan Coen (Inside Llewyn Davis, No Country for Old Men, Fargo), Richard LaGravenese (Behind the Candelabra) and William Nicholson (Shadowlands) cannot breathe pathos, wit, empathy and energy into a film, no one can.

But these attributes are in short supply in the script, and even the friendship between Louie and Phil is downplayed.  The only bit of character development is accomplished early on in Olympic training with that old motto, ‘If you can take it, you can make it’.  These motivational words are what ties Louie’s Olympic triumph into a triumph of survival and the insistent script will not allow us to forget it.

Jolie lacks the directorial flair to bring the lacklustre script to life through her direction, although no one can fault the superb production values or casting. The problem lies with the material. While you can hardly convince audiences of human suffering without showing it, who among us wants to pay to watch a talented young athlete slowly dying or being tortured for what amounts to about 90 minutes of the film?

Jack O’Connell is a hot talent after Skins and his terrific starring role in the domestic prison film Starred Up, released earlier this year was followed up by great notices in ‘71’. While O’Connell is in every scene, his main purpose is to be a martyr and a punching bag.  When he isn’t being beaten by The Bird’s stick, he is being punched in the face by his fellow British and American POWs, a sadistic punishment dreamt up by The Bird.  We know from the book’s title that he survives, so it is not a spoiler to point out that he returns to American soil as handsome as ever. His face is without a scar or scratch, let alone a nose deformed from having been broken countless times.