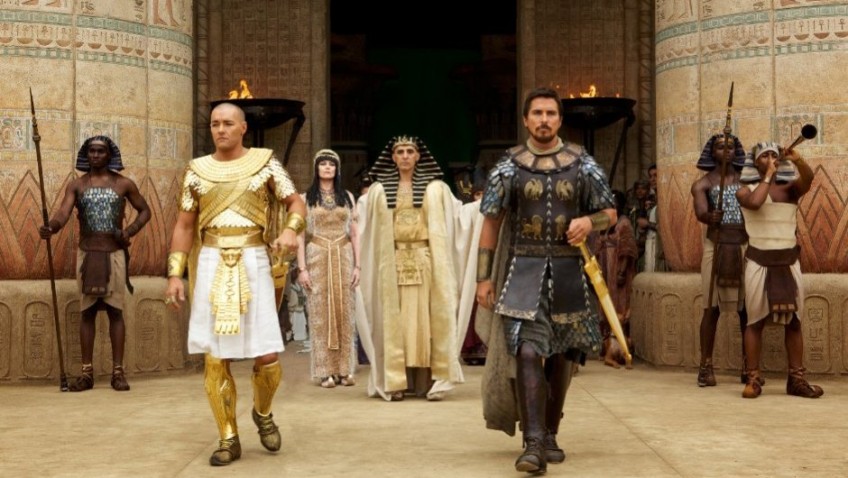 A biblical epic with a budget to match

We always hear that people in their seventies want to ‘take it easy’, ‘downsize’ or simply retire, but Director Ridley Scott (Gladiator, Thelma and Louise, Blade Runner) is not one of them.  Ridley Scott does not do ‘small films’ and his latest, Exodus: Gods and Kings is a Biblical epic with a budget ($140 million) to match its running time (150 minutes).  With its impressive special effects, a powerful story and serviceable acting, there is much to admire, even if there is not much to take away from the film when the end credits roll.

Scott and his team of writers, who include Schindler’s List scriptwriter Steven Zaillian, take liberties with the Old Testament, of course, fashioning the drama as a nature vs nurture story about two princes who grow up together. Moses and Ramesses are raised as brothers in the court of the Pharaoh Seti I (John Turturro) but become enemies when Moses discovers he is a Hebrew and spies inform Seti’s son Ramesses II of his ‘brother’s’ lineage.

As Seti I favours the more capable and hardworking Moses, there is rivalry between the two; a rivalry that is only intensified when Moses, the superior brain and brawn, saves Ramesses’ (Joel Edgerton) life in the battle against the Hittites at Kadesh.  There is also, however, a strong bond from their shared childhood (although in reality, Ramesses II was born three years after the story begins, with Ramesses already an adult, in 1300).

This Moses/Ramesses II relationship is the main tension against which the epic backdrop of plagues, rebellion and flight unfurls.  A second relationship emerges when Moses, exiled from Egypt, settles down and marries.  Two further relationships are established when Moses returns to Egypt and turns rebel leader in an attempt to force Ramesses to release his people. Moses is reunited with the Hebrew elder, Nun (Ben Kingsley), who had revealed Moses’ true identity; and befriends Joshua (Aaron Paul from Breaking Bad), a brave Hebrew slave who fights with and then flees Egypt with Moses.

Perhaps the most important and interesting relationship is between Moses and Malak, God’s messenger, (Issac Andrews). Malak takes the form of a young boy who pops up at burning bushes and the like, offering Moses ambiguous guidance.  On more than one occasion, Moses argues with Malak out loud as a bemused Joshua, to whom Malak is invisible, looks on.

As you would expect from Scott, the money is on the screen, in the special effects and in the impressive sets and costumes.  The battle of Kadesh took five days to film with an enormous cast of extras, arrows, horses and chariots (no CGI here).  The chariots-on-the-cliff scenes are particularly chilling.

Arguably the best part of the film is the plague sequence, thrillingly captured by Director of Photography Dariusz Wolski (Pirates of the Caribbean andTim Burton’s Sweeny Todd and Alice and Wonderland). There is an ironic scene in which an advisor to Ramesses tries to explain the plagues in a rational, scientific manner, like an early Charles Darwin.  What Ramesses does not want to believe is that Moses’ invisible God has the power to wreak all this havoc.

While we can accept the Hollywood distortions, it is more difficult to ignore the fact that the story overwhelms the characters.  In Gladiator, the character drives the story but here, Moses is an instrument of God and seems a bit too willing to trust in his visions and accept his new role.

Exodus: Gods and Kings could also use a bit of trimming, while the ridiculous Moses/Ramesses face off at the Red Sea should have been eliminated altogether.

Coinciding with the screening of Exodus: Gods and Kings, The Damaris Trust offers free resources for your film discussion group or club visit www.damaris.org.

Damaris also enables community groups to organise trips to the cinema followed by themed food, quizzes and discussion – thus enriching the lives of their members and those they serve in the wider community.