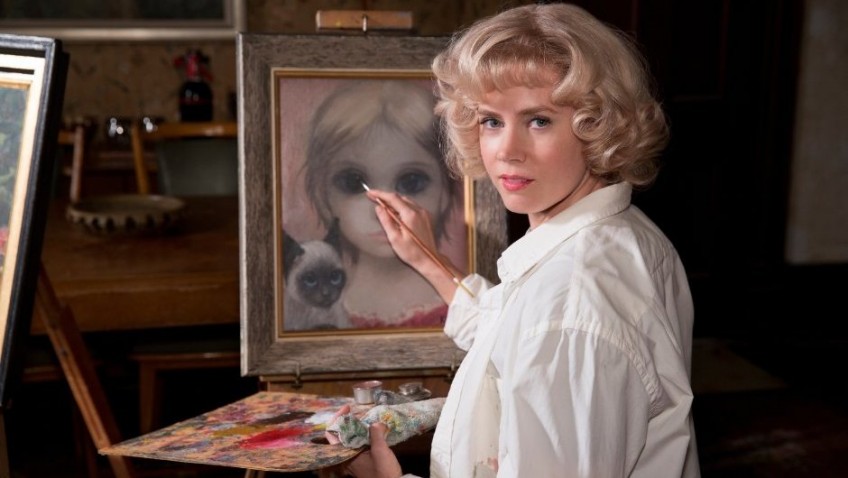 Something different from Tim Burton in Big Eyes

When you think of British Director Tim Burton you think of visual fantasy, animation, special effects, and his two muses: Johnny Depp (Alice in Wonderland, Sweeny Todd, Sleepy Hollow, Ed Wood) and Helena Bonham Carter (Alice in Wonderland, Sweeny Todd), who was, until recently Burton’s partner.  Big Eyes could not be more different.  Based on a true story, Big Eyes is told without animation, special effects, or any of Burton’s regular cast. Like most of Burton’s films, however, Big Eyes has a sinister edge and is a lot of fun.

The only fantasy in the film is in the delusional mind of Walter Keane (Christoph Waltz, Django Unchained), the artist behind the big-eyed waifs, copies of which hung in millions of households in the late 1950s and early 1960s.  Or so we all thought. The big secret is that there was a woman behind the man: Walter’s artist wife Margaret (Amy Adams, American Hustle)  painted what Walter Keane claimed to be his art.  Burton’s challenge is to show us how it was possible for this unparalleled scam to continue for their ten years of married life, and he nearly succeeds.

Margaret and Walter meet in San Francisco in the 1950s after Margaret runs away from her first husband, taking their daughter with them. She talks her way into a job painting furniture and supplements her income by drawing portraits in a park. Next to her is Sunday painter Walter Keane, a real estate salesman trying to flog his vulgar Parisian tourist scenes, which he claims are souvenirs from the time he lived there.  Viewers who know that Waltz has never played a sincere charmer, are way ahead of Margaret in doubting that he has ever been to Paris.

The art dealer Ruben (a hilarious Jason Schwartzman) is showing abstract art to potential customers when Walter storms in with his own hackneyed Paris scenes and a selection of Margaret’s masterpieces. Ruben tells him where to go. Ruben wants Jackson Pollack, not supermarket kitsch.

Financial worries and the threat, as a single mother, of losing her daughter in family court influence Margaret’s decision to marry Walter when he proposes. He might be a smooth talking hustler, but he is romantic and appreciates her art. In fact, he appreciates it so much that he has started promoting it, allowing the confusion about Margaret’s new signature on her paintings, Keane, to go uncorrected.

North Beach San Francisco might be hip and cool, but it’s still a man’s world and, at first, no one questions why a married man would obsess over sad, waif like little girls. When Margaret discovers the con, she is appalled, because she considers her creations to be her children. But Walter promises he will make them rich, and he delivers. Margaret realises that without Walter, no one would have ever seen her paintings anyway.

Soon the marriage settles into a routine that sees Margaret holed up in the attic churning out big eyed waifs for Walter to sell – as his own. Fearing that daughter Jane (Madeleine Arthur) will slip up, Margaret lies to Jane. Walter prevents Jane from entering the studio, driving another wedge between mother and daughter.

When the prices prove too high for the average fan, Walter gets the idea of selling prints, and it is the reproduction business that makes them millionaires. Walter is great on talk shows and is soon the toast of the town. But the bigger he becomes the fiercer the attacks by New York Times art critic, John Canaday (all but one of the characters are based on real people) who abhors Keane’s “art”.

Burton bathes the film in pastel colours with exaggerated lighting, a look that reflects the gaudiness of the paintings. Although this is a biopic, it is also a film about good and bad art, and whether good art can be determined by sales alone. Burton admits to owning some Keane originals and we can see the similarities in some of his animated characters.

Though Walter died in 2000, Margaret is still alive and spent time with actress Amy Adams, who fashioned her character after Margaret.  Verisimilitude does not always make for good drama, however, as Margaret seems to blend into the background, leaving the floor open for Walter to dominate the film. There is a sly humour to this story of a con “artist”, but underneath is a frightening tale of marital abuse.

It is here that the film begins to fall apart, as though Burton, in awe of the two-time Academy Award winning Waltz, stops directing and lets Waltz indulge himself in a bad parody of psychopathic behaviour. His hysterics sabotage the courtroom scene that could have been seriously funny and scary at the same time. Watching a great actor overact is about as enjoyable as looking at a bad painting.