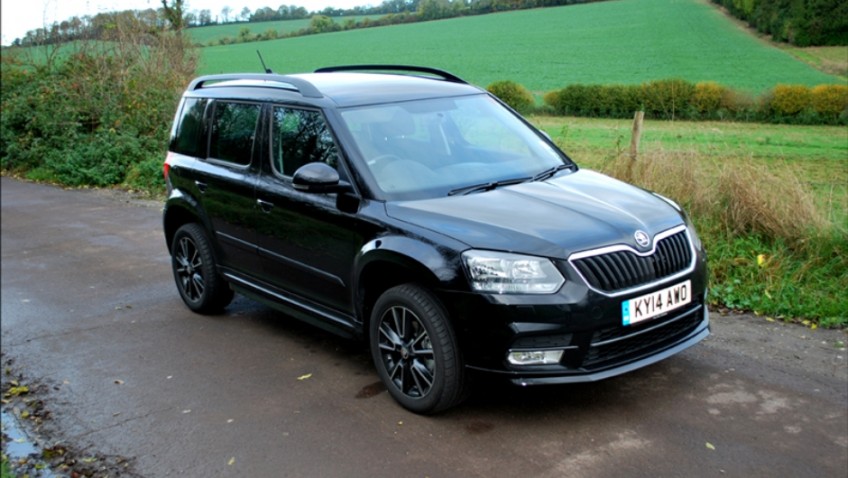 The well-liked Skoda Yeti was starting to show its age so for 2014 Skoda opted for a fairly comprehensive redesign of the crossover’s exterior and it shows. I have been driving the special 4×4 ‘Black Edition’ for a week and jolly good it was too. It is based on its SE trim counterpart. That means the Black Edition model comes with all the equipment of the SE – a 2.0L TDI CR 140PS engine, a manual gearbox (DSG auto is optional), dual-zone air conditioning, integrated headlight washers, cruise control and rear parking sensors plus a host of extras. And the whole package costs a keenly priced £23,990.

For the more eco-minded amongst you there’s also the GreenLine II version which is available in two-wheel drive with a manual gearbox and will emit just 119 g/km of CO². I’ve driven Skoda’s GreenLine models before and found them to be good, efficient performers. The featured car however was powered by a beefy 2.0L diesel engine driving two or four wheels as circumstances dictated, the 138bhp on offer delivering not just surprisingly lively performance for such a hefty motor but also an excellent driving experience; it’s like piloting a much smaller car.

A useful 320Nm of torque means it can do the business off-road too although it’s still not an out-and-out mud-plugger. The rough stuff is best sampled with the six-speed manual car, rather than the optional paddles of a DSG gearbox, in my opinion.

There’s also a more powerful diesel option with 168bhp (my personal choice) which is a more flexible engine that delivers satisfying pace, again best specified with the six-speed manual gearbox for greater user flexibility. Petrol engines are also available, depending upon your selection from the range. The cabin shows its VW antecedents by remaining typically well-finished and adorned with quality switchgear although it has to be said that the navigation, infotainment screen and connectivity are starting to look a bit dated. The functionality of the Yeti has never been in doubt. The dashboard, while lacking in visual flair, works with ease. Not exciting then but difficult to fault.

The instrumentation is clear, the ventilation ventilates and all the controls are well positioned. Entertainment and info-functions are all easy to operate, while the optional satellite-navigation system is fuss-free once you get used to it.

S trim versions get air-con and also Bluetooth, electric windows, alloy wheels and a multifunction steering wheel. SE adds 17-inch alloys, climate control, a six-disc CD and rear parking sensors. It’s a shame that iPod connectivity costs extra. As you would expect ABS, stability control and the like are all present and correct.

There are plenty of other good points too: the lightweight, wide-opening doors; the lofty headroom afforded by the boxy profile, and a large, very practical and usefully rectangular boot that is easy to load. The three individual rear seats fold independently and can be removed altogether to make way for a huge 1760L load bay, although the boot with all the seats in place will be plenty for most families. Reliability has long been a Yeti strength and this is borne out by the car finishing second out of 116 cars in the 2013 JD Power customer satisfaction survey.

As mentioned the Yeti offers an engaging drive with first class levels of body control. There‘s hardly any lean into corners for example. Four-wheel drive is rarely called upon, testament to the Yeti’s predictable body control that’s matched to an absorbent comfortable ride comfort.

The changes have breathed new life into the Skoda Yeti, including new engine/gearbox combinations, plus updated cabin trim and even ‘exclusive’ versions. This is one of the best family-choice crossovers for the money. I have no qualms in recommending this great all-rounder. Prices start at around £16,000 for the base models with 2WD raising to £25,000 or so for the top models.