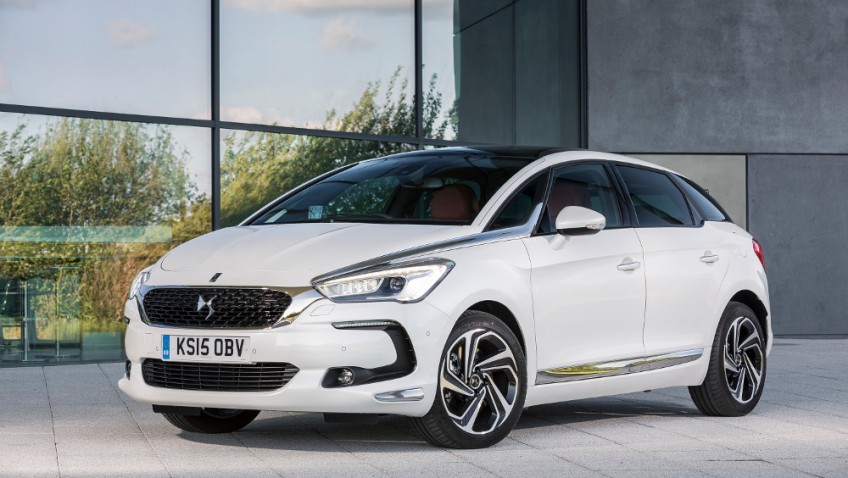 You could be forgiven for thinking I should have included the name ‘Citroën’ in the title, but things are changing for the French manufacturer. Just as Toyota did with their Lexus brand, and less noticeably Nissan with their Infiniti, Citroën are now seeking to differentiate their upmarket DS models by separating them completely from the Citroën brand.

Look around the new DS 5 and you’ll find no mention of the word ‘Citroën’. So a new automotive manufacturer is born, with the memorable name of DS – which stands apparently for Different Spirit – and the DS 5 is the first car to be launched in this new format, 60 years after Citroën first used the DS name for one of its cars. Perhaps surprisingly, the new DS 5 isn’t new at all, for it’s been around since 2012. What we have here is a revised car, with new styling that sets the scene for all future DS models. As DS themselves put it: “the DS flagship model introduces the brand identity and gains a new front end along with other qualities that make it a true DS!

Sixty years on from the original DS, the new DS 5 carries all the DNA of DS. Above all, it is a clear statement of the DS’s ambition: to revive the tradition of French premium vehicles”.

Talking of that original DS, the company had brought along a 1955 car for us to try, and it proved to be a fascinating demonstration of the way suspension has altered over the years. Near to the beginning of our test route for the drive of the DS 5 was a road of Himalayan bumps and hollows (I should add here that the venue was not in Kathmandu but the more prosaic Farnborough).

The new DS did feel the unevenness, with jarring and noise, but probably almost every other present day car would have similar if not greater problems. The old one however had the magic carpet ride, swallowing up the bumps as if they weren’t there. Of course once you start going round bends you’re grateful to be sitting in a car that doesn’t lean alarmingly whilst you’re doing it, but to be fair the old DS was far better than I expected in this respect. Interestingly, the company obviously don’t want us to forget the old car, because they’ve somewhat confusingly named one of the new ones the ‘1955 Edition’. If the new DS brand is to succeed to a useful degree, then it will have to feature design and equipment that makes potential customers raise their eyebrows and give the cars a try. Take a look at our pictures, and you’ll see a car that does look different to everyday run-of-the-mill hatchbacks.

There’s more than a hint of SUV styling there, though it’s not that tall a car; indeed one of the minus points is the lack of headroom in the rear seats. However, what DS term the ‘chrome sabre’, running from the tip of the headlamp to the front window, is a memorable and distinct feature that certainly draws the eye. There are plenty more too, including chrome sills beneath the doors, and a choice of alloy wheels to personalise the vehicle.

Engines are predominantly diesel, with just one petrol offering – a 1.6-litre with remarkably high power output of 165PS (that’s 162bhp to lovers of Imperial measurements). The diesels are spread from roughly 120 to 180PS, and then finally there’s a hybrid version whose electric and 2-litre diesel motors combine to give nigh on 200PS, with an official fuel consumption of 72.4mpg.

The DS 5 interior is the place where most of the sales will surely be made. For customers who like gadgets the volume of switches in the roof console and on the steering wheel will give the impression of piloting a 747 rather than a DS 5, and there’s real quality to be found here in the materials used.

Readers of Mature Times are by definition the sort of motorists who have considerable experience of cars large and small, and much of the DS 5 interior design will appeal as being out of the ordinary, and genuinely useful.

There are errors of course, like the folding cup holders in the rear seat which don’t fold quite as flat as one might like. And the rear spoiler, positioned so that it neatly cuts off the view of following traffic. But taken as a whole there’s a lot to like in the new DS 5, especially the seats which support one where it matters.

For many buyers it’s the distinctive design that will get them into the driving seat, and once there they’ll probably enjoy the firm ride, and will certainly be impressed with the superb levels of roadholding. This is comfortable, stylish transport; it may not be perfect, but it’s different, and that’s a quality that over the years Citroën have used to their advantage, as now will DS. Readers unfamiliar with Jaguar’s current range of cars might be surprised that alongside the extreme performance models, with prices that get up to six figures, there are many models that challenge Audi and BMW in terms of their practicality and value.

Recently I spent a day driving the whole range, and whilst thoroughly enjoying the likes of the new F-Type coupé it was the XE saloon that impressed me even more.

Jaguar Land Rover is these days part of the Indian Tata group, and the current Jaguar range features three saloons – in ascending size the XE, XF (about to be revised) and XJ, plus the F-Type sports car which can be had in coupé and convertible body styles. Coming soon will be the oddly named F-Pace, which is a ‘crossover’ style vehicle, i.e. one which is built on a car platform but has elements of ‘Sports Utility’ (which means tall) styling in its design.

The XE saloon isn’t a large car (it’s somewhere between a Focus and a Mondeo), but there’s plenty of room for adult bodies in both front and rear seats. Two diesel and three petrol engines provide the power choice, with outputs from 163 to a formidable 340PS; the 0-60 acceleration time of under five seconds illustrates how powerful that one is. But staying with the more practical aspects of the car, the XE is available in five levels of trim, and all are very different. els on seats and doors, you can have them. Or perhaps an all cream interior – it can be done. The facia curves neatly from one door to the other, and is referred to by Jaguar as the ‘Riva Hoop’. It’s available in a range of finishes, and you can choose from four aluminium, two specialist and five wood veneers to bring a contemporary, sport or classic feel to the car.

It’s an easy car to drive, and auto transmission is available with both petrol and diesel engines. Rear pillars are a touch obstructive of the driver’s view, but for those who find parking a chore, rear parking sensors are standard, and should you want the ultimate assistance, then the Advanced Parking Assistance pack will do the job for you; you need only control the brakes and accelerator.

All models have stop/start technology, or Intelligent Start/Stop as Jaguar like to call it. It helps to achieve what are exceptional fuel figures; official consumption of the 2-litre 180PS diesel for instance is 67.3mpg, which is far superior to many cars that are a size down from the Jaguar. You won’t of course achieve that figure in everyday motoring, but it gives an idea of the beneficial standard of fuel consumption relative to other cars.

Another aspect that minimises consumption is the amount of aluminium employed in the car’s structure – less weight requires less fuel to push it along. The XE is the first car based on what Jaguar calls its Aluminium Intensive Architecture. It has the lightest body in its class, yet the construction is also strong and rigid which ensures agile and responsive handling. I certainly had no complaints on that score; it may be a family saloon, but the handling feels solid, sporting and safe.

Back in the cabin and looking for the practicalities of motoring life, I always check to see just how many pockets and cubby holes are fitted; we need them for the wealth of stuff that inevitably accumulates over the years. Certainly the XE is well served in this respect.

There’s space for sunglasses in the overhead console, a smartphone sized stowage tray, spacious armrest cubby box and bottle holders in each door. More importantly, the boot is a good size, and easily expandable by folding down the rear seats, which you achieve via two pull chords in the boot.

The result isn’t flat (it does have a pronounced upward slope) but it’s a really useful length.

Before I went to the driving day I was convinced the sporting F-Type would be my main preoccupation. In the event the XE scored such high marks for its mix of practicality and driving pleasure that I devoted far more time to this one. If you’re thinking of a saloon of this size (for you Imperialists it’s 15’4” long), have a look at the XE. It’s got a lot going for it, and would be a welcome change from the ubiquitous BMWs you see all over our roads. For every Jaguar sold in the UK, BMW sell eight of their cars.