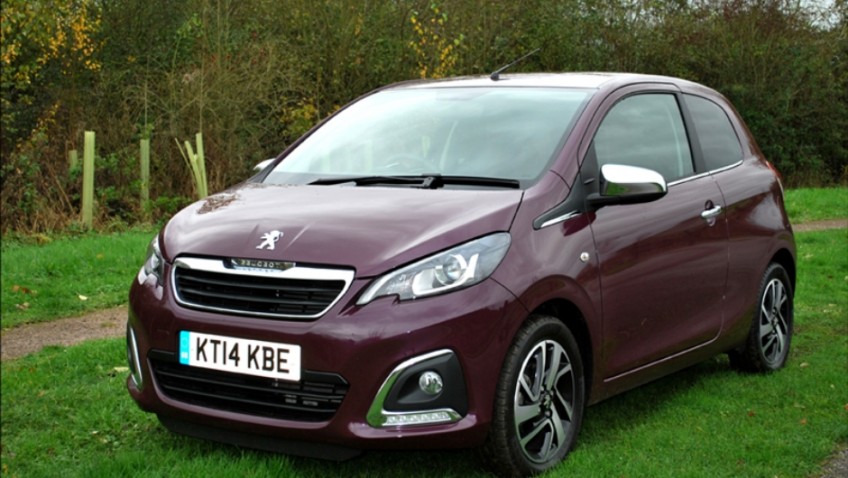 The Peugeot 108 is great on petrol!

This is the latest incarnation of the city car from Peugeot. It is an absolute improvement on its predecessor and, during the test period, resolutely refused to use petrol. The gauge hardly moved.

Peugeot reckon that 65mpg is on the cards although more realistically in general motoring you should expect to see something in the mid-fifties.

The 108 comes in 3 and 5 door versions with a variety of trim levels and a couple of engine options which vary according to the version choice. The smaller engine available is the three-cylinder 1.0L 68hp (95g/km CO²) petrol, carried over from the old 107.

The test car was presented in Allure trim – one off from the range topping Feline model – and featured Peugeot’s new 1.2L VTI three-cylinder ‘Puretech’ petrol motor that offers up a sprightly 82hp whilst emitting just 99g/km of emissions. Our suggestion is that this is the engine to go for because, although it can be a bit raucous under hard acceleration, it delivers ample power making this city Peugeot an easy drive and a lot of fun. It can stay with motorway traffic too.

The previous Peugeot 107 was a good car and despite the ‘City’ moniker these small motors are more than capable of being used as a regular driver.

Your reviewer has taken an alternative brand version of this car from Wiltshire to and around the wilds of North Yorkshire in bad weather and it didn’t miss a beat. This new engine will really improve the 108’s capability over longer distances.

We liked the colour contrast available although the white embellishments on the dashboard were perhaps a bit too bold. It’s not a problem though because the car can be specified from a choice of eight paint finishes, three interior ambiences, plus seven stylish and creative themes to choose from. You can even get a fabric roof for that wind-in-the-hair effect. This 3-door 108 Allure is pretty much fully loaded with the necessary. The fabric seats (Feline gets leather) are surprisingly comfortable and there is sufficient adjustment. It’s well made and has all the now expected features including Bluetooth, air-con, steering wheel controls, Digital radio, keyless entry and go, a 7” touch screen and a decent reversing camera; plus this version gets some smart 15” alloys. For £10,995 it is cracking value. Obviously the car is built to a price – the plastics are hard but the overall look of the interior is fine.

Space in the back is cramped to be fair. Children will be fine but for lanky teens or creaking motoring journalists the 5-door would make life easier. The sight of your reviewer emerging from the back in the manner of a trainee escapologist trying to get out of a tumble dryer will live long in onlookers’ memories. Specify the extra doors.

The boot seems slightly larger than the old car though, which is a plus and I liked that the rear shelf is attached to the hatch as it opens. The rear seats split 50:50.

Out on the road the handling has been sharpened up with new shock absorbers and a stiffer anti-roll bar, which means the 108 remains composed through tight twisting roads. The steering is light and the whole package is clearly set up for driver enjoyment. 62mph is reached in a nimble 11 seconds. Top speed for the 1.2L is 106mph if it matters.

If you want the bigger engine – and you do for more relaxed main road cruising – then you’ve got to choose either the Allure or Feline models. This is no bad thing though because, for the money, they are well specified.

The competition in the city car sector is intense, such is the number of brands and models on offer. This is the problem that the Peugeot 108 has. It has to persuade buyers. Peugeot regulars won’t need any convincing but with the wide choice on offer the French company are going to have to make this car an attractive deal.

To this end, for example, you can get it on their ‘Just Add Fuel’ personal leasing deal if you choose to swing that way.

All city cars are always going to have limiting factors, but our week with this car left a favourable impression. Recommended as a small car choice.