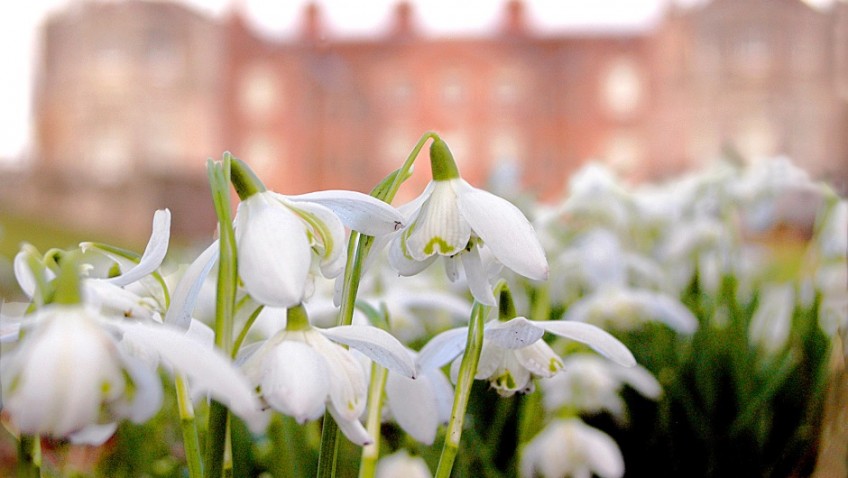 The best places to see Snowdrops in South East England

As one of the first flowers to break through the thawing ground and raise their head, the humble Snowdrop traditionally signals the end of winter and the promise of brighter spring days.  With their early bloom the delicate “flower of hope” carpets woodlands, meadows, churchyards and gardens across the South East of England.

Join one of the numerous guided walks to discover some of the most spectacular displays in the country or wrap up warm and explore Mother Nature’s finest in your own time.

Drifts of Snowdrops appear along the banks of the Font stream of this ancient former priory, where the warmer water creates its own microclimate. Elsewhere, the open acres of the river garden are magically transformed by drifts of purest white. In February, you can enjoy a guided Snowdrop walk through the grounds of Mottisfont on the 7th, 8th, 14th and 15th February 2015.

Pop along to Wakehurst, Kew’s country estate in West Sussex where the mass planting of 20,000 Galanthus nivalis bulbs (the common Snowdrop) near the visitor centre promises the perfect welcome to the gardens. Symbolising purity and the cleansing of the earth, Snowdrops were often planted by Norman monks resulting in impressive displays at monastic sites including Welford Park in West Berkshire.  The display of Galanthus nivalis in the beach wood covers approximately 5 acres bordering the River Lambourn.  To admire the rarer species head to the formal gardens South of Queen Anne House where you can find Lord Monstictus, green tips, Lady Elphinstone and John Gray varieties.

The garden of Great Dixter has a beautiful structure which becomes more apparent during the winter months when the gardens are closed.  Visit during February’s two open weekends for an insight in to garden’s preparations for opening and be treated to a stunning array of Snowdrops, crocuses and hellebores.

The National Trust’s Sissinghurst Estate is a stunning place to explore at any time of year and winter is no exception.  During the colder months their impressive potting sheds and glasshouses are working overtime prior to planting.  The team at Sissinghurst have been bulking up a dozen other types of Snowdrop in the nursery to add to the thirteen plus varieties already admired along the banks of the moat.

An exclusive guided tour with the Head Gardener will ensure you catch all the seasonal highlights of the garden and arboretum.   Spot wonderful displays of Snowdrops, camellias and magnolias underplanted with a host of daffodils and grape hyacinths. The bulb meadow in the walled garden is also full of Snowdrops, early narcissus and rare hellebores. By Valentine’s Day, over 150 different types of plant are flowering at Nymans and the Snowdrop clusters offer cool contrasts to fiery witch hazel oranges and the rich red stems of the dogwoods.

Visit the historic meadow of Runnymede, famed as the birthplace of modern democracy.   2015 marks the 800th anniversary of King John sealing the Magna Carta Charter, considered by many to be the most important document in history.  On this anniversary year reflect on the values of liberty, democracy and freedom at the priory ruins and ancient Ankerwycke Yew surrounded by vast clusters of the Snowdrop – the flower of hope.