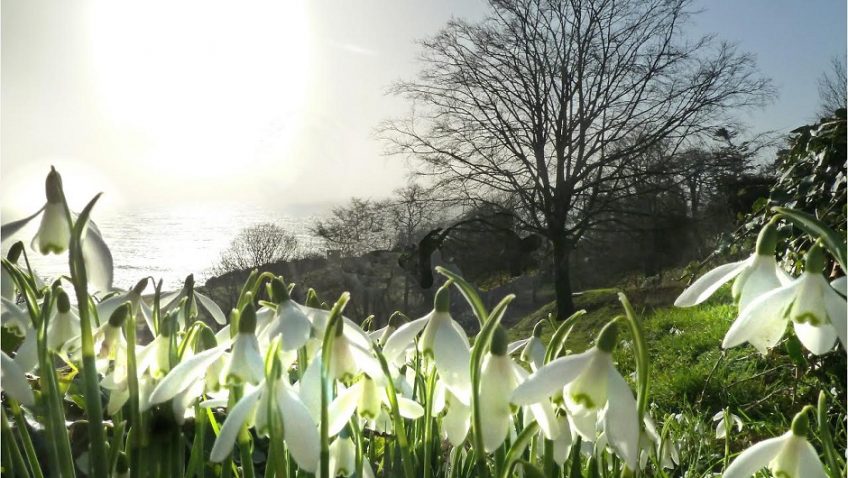 Snowdrops: The first signs of Spring

It may still be winter outside but some of us will already have noticed snowdrops starting to peek out from the bare cold ground reminding us that spring isn’t too far away and that the days are lengthening. Snowdrops are usually the first signs of life in our gardens, flowering between January and March, and are surprisingly resilient for something that looks so delicate.

They are more than able to withstand low temperatures and if frost hits and snow falls following a mild spell, then the sturdy little snowdrops slow down their growth, almost slipping into suspended animation, springing into life again when the temperatures rise.  It really only frosts and snow falls in late spring that do any damage.  Bravely popping up through the frozen and often snow covered ground, they are a cheery sight at this time of the year.

There are about 20 different species of snowdrop, or Galanthus nivalis to use the botanical name. Despite it being a common sight in the UK, it is not an indigenous plant being a native of Europe; from the Pyrenees and Poland southwards to Albania, southern Italy and northern Greece. References to snowdrops in UK gardens goes back to the 16th century but the first mention of snowdrops in the wild was in the later part of the 18th century, suggesting that they were probably escapees from formal gardens.  Rumour has it that soldiers coming home from the Crimean Wars in the 1850s were so enchanted by the snowdrop that they bought them home to plant in their gardens.  How the snowdrop got here in the first place is a bit of a mystery with various theories being expounded but none proven. The old English name for the common snowdrop was the candlemas bell as they flowered traditionally around Candlemas on the 2nd February. The development of numerous species combined with global warming means that we can enjoy these blooms for longer these days. The Welsh name for the snowdrop is Eirlys, which is also used as a girl’s name; the Irish name is plúirín sneachta (little snow flower) and its bláth shneachdaidh (snowy blossom) in Scots Gaelic. Now firmly naturalised in our woodlands, parks and gardens the snowdrop is one of our most popular bulbs. As with other wild flowers, don’t be tempted to dig them up. Under the Wildlife and Countryside Act 1981, which covers the whole of the UK, it is illegal to uproot any wild plant without permission from the landowner or occupier. Leave them where they are for all to enjoy.

Appreciating the snowdrops in our garden is one thing but to walk through a landscape carpeted by the gently nodding flowers on a bright, sunny, late winter’s day is really something that can lift our spirits and gladden the heart. Some of us may have a special place near to us that has a wild display, but if you’re not lucky enough to have somewhere on your doorstep, there are numerous gardens, arboretums and parks across the UK that open specifically to allow us access to this early spectacle.

It’s worth remembering that the snowdrop displays are dependent on the weather so its best to keep your eye on the weather forecast and if your planning a special journey then contact your chosen destination to make sure the flowers are in bloom. The National Trust has a range of properties and gardens that have well signposted walks through areas where snowdrops carpet the ground and sweep down through the woods and details of these can be found at https://www.nationaltrust.org.uk/lists/top-spots-for-snowdrops.

You’ll probably find snowdrop plants are available to buy in the National Trust shops as well.

So wrap up warm, dust of your flask and step out and enjoy this most iconic late winter display.