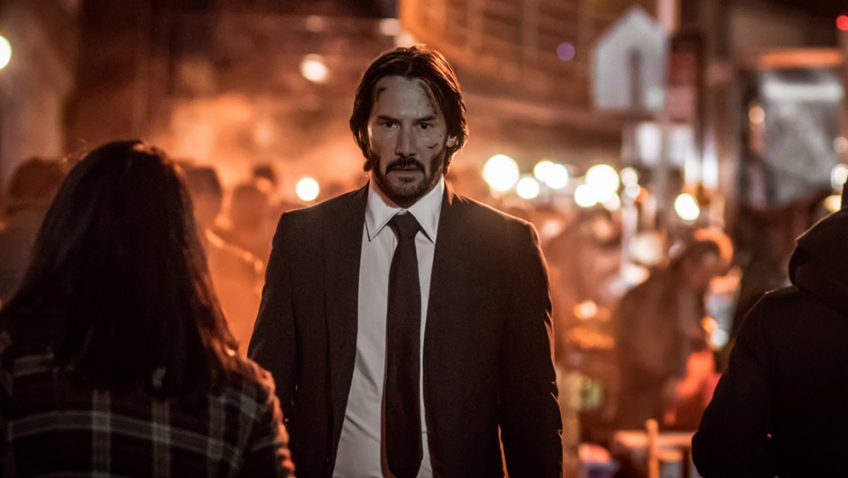 Most hitmen do not have the luxury of retiring.  But if Keanu Reeves’ age is anything to go by, John Wick retired at the ripe old age of 50 in 2014’s John Wick, written by Derek Kolstad and directed by stuntman-turned- director Chad Stahelski.  What distinguished John Wick from dozens of cartoonish body-count movies were the charismatic Keanu Reeves, Stahelski’s elegant fight choreography and Kolstad’s original details, such as The Continental. The Continental, for those who do not know, is a luxurious, Manhattan hotel for hitmen where the enigmatic, authoritative Winston (Ian McShane) enforces the code of conduct. Kolstad, Stahelski, Reeves and McShane are back in John Wick: Chapter 2

, as are the elegant martial arts/gun-fu fight scenes and a body count that even Jet Li might balk at. What’s missing is the subtlety of the original and the possibility, however, remote, that John Wick is a real human being.

John Wick was left a widower at the beginning of the 2014 film, but he had his pet puppy dog, a departing gift from his wife, his beloved 1969 Mustang and his designer house with its buried arsenal of weapons – retained for insurance.  Not long into that film the cute little puppy is murdered and the car is stolen.  John Wick comes out of retirement to revenge his loss, but retires anew when the mission is accomplished.  Don’t worry if you missed the original. John Wick: Chapter 2

is aware of its role as the second of a trilogy or franchise.  The film begins with an expository recap of the first film and ends with a blank canvas set up for the third film.

When the film opens John Wick (Reeves) has located his Mustang at the headquarters of Russian crime boss Abram Tarasov (Peter Stormare), the brother of Viggo Tarasov, the ruthless crime boss in the 2014 film.  Abram reminds us, in a narration that is clearly for the benefit of those who haven’t seen John Wick, how deadly Wicks is. Abram is in awe of the man who has just penetrated his heavily guarded establishment in a virtuoso display of jujitsu, kung fu, gun-fu and stunt driving and then walked calmly into his office to declare peace. If Wick looks a bit ruffled the car, which Wick manages to drive home, is a wreck.

The news of Wick’s car rescue must have made the rounds for Wick is soon visited by the fashionably-dressed Italian crime boss Santino D’Antonio (Riccardo Scamarcio) who holds an old marker (blood oath) on Wick.  Wick utters wearily, ‘I am not that man anymore,’ but no one believes him.   And no one cares.

D’Antonio is not what you would call a family man and wants Wick to assassinate his sister Gianna (Claudia Gerini) who holds a seat at the High Table that he covets.  The High Table is something like the Wizard’s Council or Ministry of Magic in the Harry Potter series: a powerful council of the top players. While there are Muggles in Harry Potter’s world, everyone in John Wick’s narrow world is in the ‘business.’ D’Antonio has a problem with rejection.  He burns down Wick’s house with a grenade launcher that sends Wick, and his new, nameless dog, flying out the window.  Miraculously alive, but homeless, Wick and the dog check into the Continental where the poker-faced manager, Charon (Lance Reddick) agrees to babysit the dog.

Winston reminds us of the Continental’s rules and it’s not what Wick wants to hear.  Rule No. 1, “No blood on Continental grounds” (a rule Wick is eventually driven to break) and Rule No. 2, “Every marker must be honored.”   In short, Wick is forced to do D’Antonio’s dastardly deed after all.

So, like Tom Hanks’ Dr Robert Langdon in the Dan Brown adaptations, Wick travels to Rome for his job. We are taken to some of the insider hotspots where Wick shops for bullet-proof attire and a variety of guns, as though he were wine tasting. Wick invites himself to a party Gianna is throwing and must then face the wrath of her bodyguard Cassian (played by the rapper/actor/producer, Common).  Wick struggles to get out alive, particularly after D’Antonio has sent his mute enforcer Ares (Ruby Rose) and her henchmen to finish him off should Cassian and his thugs fail.

How does Kolstad fill the rest of the film?  D’Antonio once again comes to the rescue.  Suddenly aggrieved at the assassination of his beloved sister that he himself ordered, D’Antonio puts out a $7 million contract on Wick.  Within minutes, every busker, business man or bum in the subway is a potential killer.  Again there emerge similarities with the Harry Potter franchise, and the spin-off, Fantastic Beasts and Where to Find Them.  Just as there is a Magical Council outside of the UK, in Manhattan, so the Continental now has branches in major cities. And, like magicians, hitmen are everywhere in the population, you just have to identify them.

John Wick might seem like a magician with a gun as his wand, but even Harry Potter needed help.  Here Stahelski reunites Reeves with his Matrix co-star Laurence Fishburne who plays the Bowery King. He holds court from a roof top with as many henchmen as pigeon-lofts. His minions, who pretend to be beggars in the streets and subways, are his eyes, ears, and weapons. Wick persuades the Bowery King that it is in his best interest to allow Wick safe passage to D’Antonio.

has many of the compelling and attractive qualities that made the 2014 film so much fun. But it is a case of too much of a good thing. All of the original film’s selling points are overused, from The Continental, to Wick’s ability to fight off a dozen men at a time without superpowers. Now it’s more like a hundred. Eventually, even the intricately choreographed chase-and-fight scenes grow tedious.  As the second in a franchise, the film also sacrifices some of its integrity as a stand-alone. That said, to grow tired of Keanu Reeves is to be tired of life and John Wick: Chapter 3 – Parabellum might have a marker on you yet.