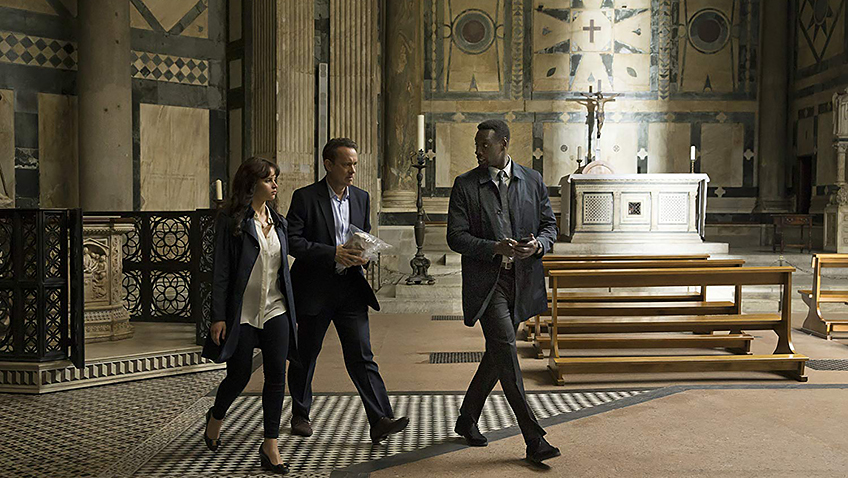 The popular, talented actor Tom Hanks must have signed a pact with the devil when he signed on for film adaptations of Dan Brown’s The Da Vinci Code, Angels & Demons and now, Inferno

. How else can one explain why he would waste his comedic and dramatic talent on this now outdated series?  At least the first two films involved the sinister side of the Catholic cult Opus Dei and the secretive dealings of the Catholic Church. The plot of Inferno

, with its wealthy biotech villain Bertrand Zobrist (Ben Foster) threatening to release a deadly virus into the world, sounds  more like one for James Bond than for Harvard Symbology professor Dr Robert Langdon (Hanks).  Luckily for Langdon he goes through some of the film drugged into a state of amnesia, but we are not so lucky.

The first question is to ask why, when a film character conveys a message about overpopulation, that character is portrayed as a psychopath or other form of nutcase?  Geneticist Bertrand Zobrist (Foster) looks a bit like Vincent Van Gogh in St Remy but he’s a scientist who quite rightly attributes all the problems of the world to the effects of overpopulation.  His solution, releasing a deadly virus that will kill 95% of the population allowing a Renaissance, is, granted a bit drastic. His plan is also irrational, because before having the satisfaction of seeing it realised, he jumps off a tower to his death, leaving behind a Pokemon trail comprised of clues that only a reputed Dante expert could follow.  Just why he does this is anyone’s guess.   It could have something to do with extending the film’s running time from ten minutes to two hours and providing an excuse for Dr Langdon to reappear.

Dr Robert Langdon wakes up in what looks like a Florentine hospital with what the informative doctor calls ‘a head trauma’ and temporary amnesia.   Felicity Jones plays Dr Sienna Brooks (when Florence Brooks would have been so much more relevant).  She proves surprisingly adept at helping Langdon escape when a female member of the Carabinieri, in pure Robocop mode, comes charging into Langdon’s private room with a smoking gun.  Sienna takes her patient to her flat where he tries to figure out why he is, once again, on the run in Italy instead of lecturing at Harvard University.

Then the first clue emerges in the form of a cylinder carved from bone with a biohazard on it that Langdon finds in his jacket pocket.  Far from killing them, it provides the first clue to saving the world.  For this cylinder is a hi-tech projector that, when shined on Dr Brook’s wall, is Botticelli’s Map of Hell, with numbers, and the motto ‘truth can only be glimpsed through the eyes of death’, superimposed on it.  Since the painting was based on Dante’s Inferno this Botticelli begins a treasure-hunt through Florence, Venice and Constantinople.  During this hunt, which is also a chase, a significant proportion of those cities’ cultural masterpieces – from the ceiling painting, Apotheosis of Cosimo I to the Hagia Sophia Basilica Cistern – suffer from collateral damage.

Meanwhile, in hot pursuit of Langdon, four other possible enemies are after Langdon: Elizabeth Sinskey (Sidse Babett Knudsen), head of the World Health Organisation; Christoph Brüder (Omar Sy) head of the SRS team with a personal interest in finding Langdon; and Harry Sims (Irrfan Khan), the powerful head of a consulting firm who have been paid by Zobrist to guard the missing cylinder.  At one point, Langdon even suspects the US Consulate when his SOS call produces Robocop, who turns out to be Vayentha (Ana Ularu), the Consortium’s agent in Florence. 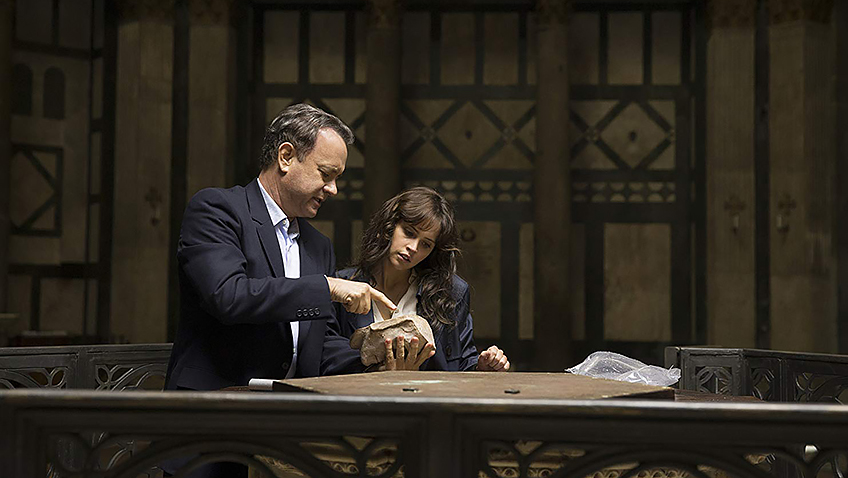 Even those viewers who catch all the dialogue and follow the plot will find it convoluted to the point of absurdity. Dr Elizabeth Sinskey, who turns out to be a too-busy working-for-romance love interest for Langdon, delivers an expository explanation for all the subterfuge that leaves you wondering impressed with WHO’s budget and wondering why  the WHO are competing with the CIA or Interpol.

For a film so pleased with its erudite references, there are a few surprising gaffes.   The most conspicuous incongruity is that the world’s expert on Dante, and a man who knows Rome and Florence better than the average resident, cannot speak Italian.  Toward the end, Langdon asks a museum guard, ‘do you speak English?’ while Sienna translates for him – and she is British.    At one point, he listens intently as Sienna lectures him on Dante’s unrequited love for Beatrice, something any art or literature student let alone Dante expert would already know.  Running with Sienna through the Boboli Gardens where Robert connects ‘the eyes of death’ phrase to Vasari’s The Battle of Marciano in the museum of the Palazzo Vecchio, we see a time code on the screen, as if to reflect the police tracking them.  As they cross the gardens it is 8.25 AM and when they arrive in the museum a few minutes later, it is full of tourists, although the museum opens at 9:00.

Despite finding the energy to parkour from an intensive care bed through several cities, Langdon, as a character, is wooden.  Played by Hanks, he has zero personality and his romantic scenes with Dr Sinskey are about as heartfelt as an apology from Donald Trump. Felicity Jones’ brings life to the first half of the film, but she fades away, as does her role, while her character is far from convincing.   The only actor who appears to be having some fun and making the most of a thankless task is Irrfan Khan. Demonstrating his professional skills before an astonished Dr Langdon, he comments modestly, ‘Not my best work, but good enough for the Italians.’  Perhaps that’s an embedded statement from Director Ron Howard, seriously underestimating the Italians.