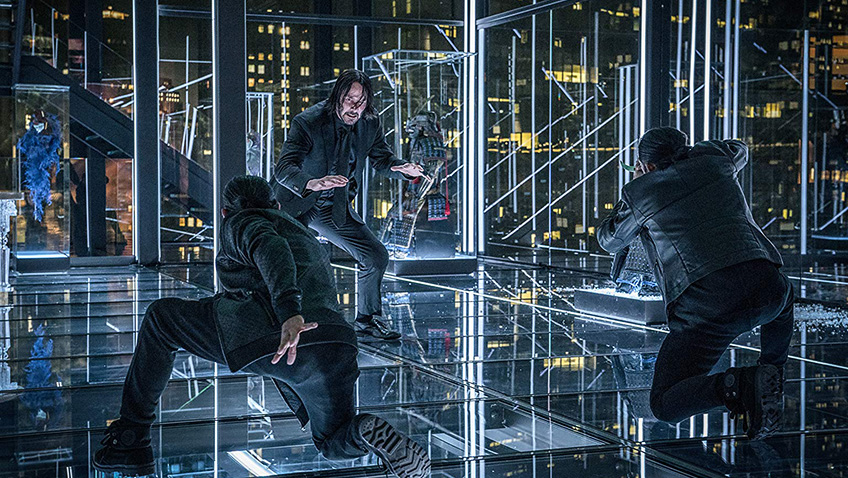 Keanu Reeves is irresistible as a reluctant assassin, but the impressive fight scenes grow tedious

In the US and UK film ratings systems, violence is not half as bad as sex. With each John Wick film, the neo-noir style gets darker and the length and the body count grows, while the sexual content remains at roughly zero. In fact, there is no time to eat, sleep, drink, go to the toilet, or have a conversation either. It’s not exactly a dog’s life because the dogs in John Wick: Chapter 3 – Parabellum

– Wick’s pit bull and Wick’s old friend Sofia’s (Halle Berry) two Belgian Malinois hounds – are treated more humanely than the humans. It’s an assassin’s life in the parallel universe of The High Table: the equivalent of the Wizard’s Council or the Ministry of Magic in the Harry Potter

series. Those in the business must adhere to its rules, and are subjected to its punishments. But, akin to Scientology, the worst is in store for those who excommunicated by it.

The title comes from a 4th century Roman military saying: Si vis pacem, para bellum: If you want peace, prepare for war. Stuntman and stunt coordinator Chad Stahelski, who made his directorial debut just five years ago with the first, sensational John Wick film, does not deliver any peace in this third instalment and there isn’t much time for preparation. John Wick: Chapter 3 – Parabellum

picks up where John Wick: Chapter 2 ends with the key characters from John Wick: Chapter 2 reprising their roles. These include Winston (Ian McShane), the enigmatic manager of the High Table’s hotel, the Continental; his diplomatic, poker-faced concierge Charon (Lance Reddick) and the Bowery King (Laurence Fishburne), a defiantly independent leader whose army of followers sleep under Manhattan’s tunnels, along its underground platforms and behind its rubbish bins, the eyes and ears of the underworld.

In John Wick: Chapter 2, the eponymous hero, forced out of retirement on a marker (a redeemable favour) to commit sororicide on half of Santino D’Antonio, ends up killing the double-crossing D’Antonio in the Continental – the assassin’s hotel where violence is off-limits. With hours remaining before he is excommunicated with a price on his head and open game for assassins everywhere, Wick is on the run. 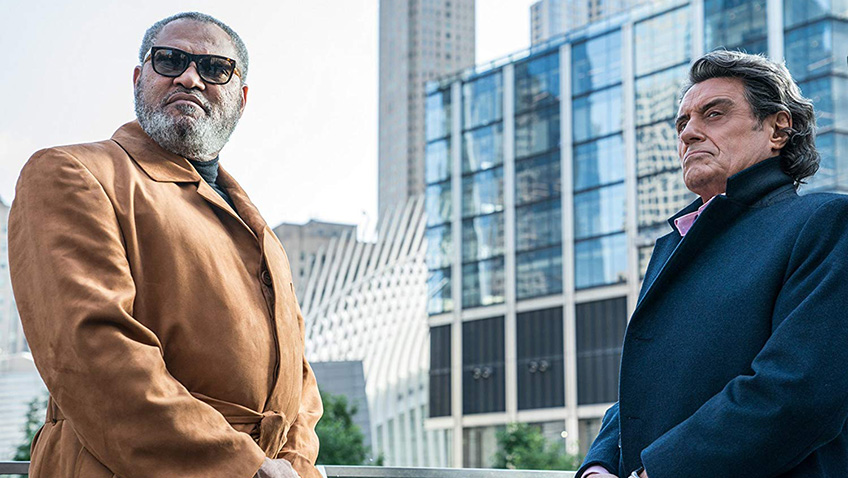 As the countdown in The High Table command room works its way to zero, and the bounty is up to $14 million, Wick makes it to the public library where, hidden in an arcane 1864 Russian folk book on the shelves, he grabs a few markers and a crucifix. These, the rain soaked clothes on his back and a dog (that he leaves in the loving care of Charon) are, quite literally, all he has left in the world.

For the first half of the film Wick calls in his markers, but even this is not easy as he cannot walk one meter without being attacked. In the shelves of the library one enterprising thug is hoping for a head start, minutes before the excommunication is official. When Wick points out he has time remaining, the thug points out that ‘$14 million is a lot of money.’ Wick replies, ‘not if you don’t have time to spend it,’ and quickly sees off the misguided opportunist.

This being an action movie that is dependent on Stahelski coming up with increasingly novel and inventive ways of killing people, getting Wick to his next marker proves more of a challenge. John Wick has the kind of reputation that prompts hitmen to hunt him in groups. In one early scene these people end up looking like human pin cushions, where the pins are knives. Minutes later, hiding out in a stable, Wick lets the thoroughbreds do the kicking, before escaping on a horse, chased by motorcycles. Later on he switches to a motorcycle, and hacks at his motorcycle assailants chasing after him from both sides. 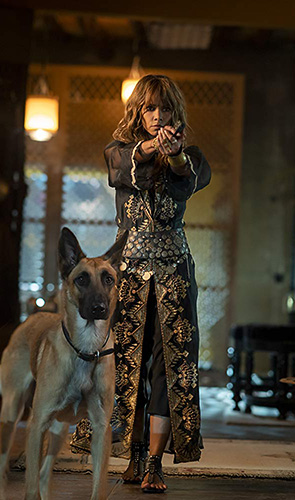 Once Wick reaches the people who might help him, things do not get any easier because by now, Wick is excommunicado and no one can help him. The Bowery King is the first to refuse and he receives a frosty welcome from The Director (Anjelica Huston), a member of the High Table. She is busy putting an exhausted – and very talented – ballerina through her paces in a magnificent old theatre, where Tarkovsky is on the marquee. Pulling out the crucifix, Wick asserts his rights as ‘a child of Belarus’ and manages to persuade the Director to grant him safe passage to Casablanca. There he hopes to find the Elder (Saïd Taghmaoui) and ask his pardon.

Although Halle Berry gets second billing, her role, welcome as it is, is restricted to a twenty minute segment in Morocco. Again Wick has to work hard to call in his marker with Sofia (she owes him big-time) but it’s worth the wait. The two coordinate their talents with the help of Sofia’s two impressive attack dogs, when a meeting with her boss does not work out as planned. Driving Wick to the desert to find the Elder, Sofia ensures that the dogs are rewarded with bottled water, whereas Wick is left to die in the desert with a recycled drop in a big plastic bottle.

After sacrificing a finger in exchange for a conditional pardon from the Elder, not to mention a bath and a dry-clean, Wick returns to Manhattan, where a new character, the Adjudicator (Asia Kate Dillon) is putting a spanner in the works. She is in town to mete out justice to The Bowery King, The ballet mistress and Winston for helping Wick. When Winston refuses to stand down as manager of the Continental, the Adjudicator declares it deconsecrated, allowing her to send in an army of assassins to teach Winston, the loyal Charon a lesson and Wick (who requests ‘a lot of guns’) a lesson.

While the stunts are awe-inspiring (many of them are performed by Stahelski), in a film well over two hours, there are too many of them. How many times can you can watch Wick put a bullet in someone’s head, and how many times can Wick be thrown into glass partitions before he cuts himself, you begin to ask. The more the violence becomes cartoonish, the easier it is to tune out.

Stahelski, Reeves and Derek Kolstad, who created the character, the story and is the lead scriptwriter, all have personal stakes in the series. Kolstad, an unknown writer, hit the jack pot in 2012 when Reeves read his script entitled Scorn and suggested the title be changed to John Wick, who was named after Kolstad’s grandfather. Let’s hope they can brain storm their way into a new direction for this cool character, because more of the same can only bring diminishing returns.