Home / LIFESTYLE / REVIEWS > / FILM REVIEWS / A superb new print of one of the great war movies of all time. Laugh until you cry 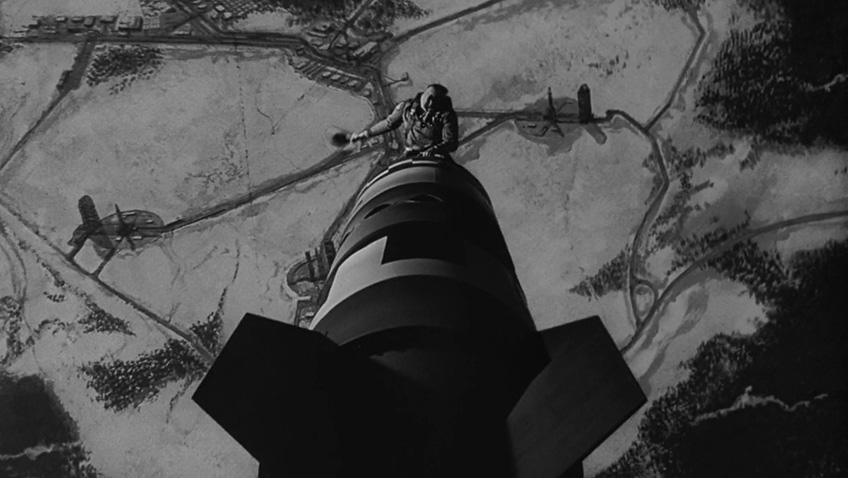 A superb new print of one of the great war movies of all time. Laugh until you cry

Whether you have never seen Stanley Kubrick’s 1964 masterpiece, Dr. Strangelove or: How I learned to Stop Worrying and Love the Bomb

, or last saw it at the height of the Cold War; or more recently on the small screen, watching the superb new restored 4K print on the big screen will be a thrilling and enjoyable experience. Far from being dated, you’ll be at how topical it is over half a century on, and how the brilliant satirical humour, the acting and the unforgettable images have stood the test of time.

Dr. Strangelove or: How I learned to Stop Worrying and Love the Bomb

could have been entitled, How to Succeed in a Nuclear Apocalypse Without Really Trying, as the ease and speed with which the world has been programmed to self destruct is at the heart of the film. Hitler set out to destroy what he did not like in the world, but it is for former Nazi scientist Dr. Strangelove to relish the real deal, complete with an underground bunker for a few thousand of the elite, with a ratio of 10 perfect female specimens for every one man.

The action takes place in three very different locations conceived by the talented set designer Ken Adam (Dr. No) using sound stages on the Shepperton Lot and the studio buildings as Burpelson Air Force Base, home of the Strategic Air Command.

The film had to be shot in the UK as Peter Sellers, a ‘key player’ in the financing of the movie, was going through a divorce and could not leave the country. At Burpelson we meet paranoid Brigadier General Jack D. Ripper (Sterling Hayden), and Group Captain Lionel Mandrake (Sellers), a British RAF exchange officer. Mandrake is increasingly worried about Ripper’s behaviour when, after sending off the strike order to the Airborne fleet, he seals off the Air Force Base and shuts off all communication so that no one can access the recall code.

The second location is inside the B-52 Stratofortress bomber commanded by its pilot Major T. J. “King” Kong, (Slim Pickens). When Pickens, who had never been out of the USA before, showed up in Shepperton with his cowboy hat and boots, fringed jacket and an unreal southern accent, bomber James Earl Jones recalls that the cast and crew thought he was already in character. In fact, that was how Pickens always dressed and sounded. Pickens owed his career changing role to an accident as Sellers was contracted to play Kong. Convinced that Kubrick’s Lolita’s success was due to Sellers playing multiple roles in that film, the finance was conditional on Sellers playing four roles here, too. When he sprained his ankle and could not move around in the cramped air craft set, and John Wayne flatly rejected the role, Pickens was hired. He might also owe the boost to his career to Kubrick’s subterfuge. Apparently, Kubrick never told Pickens it was a black comedy, allowing Pickens to play it straight. 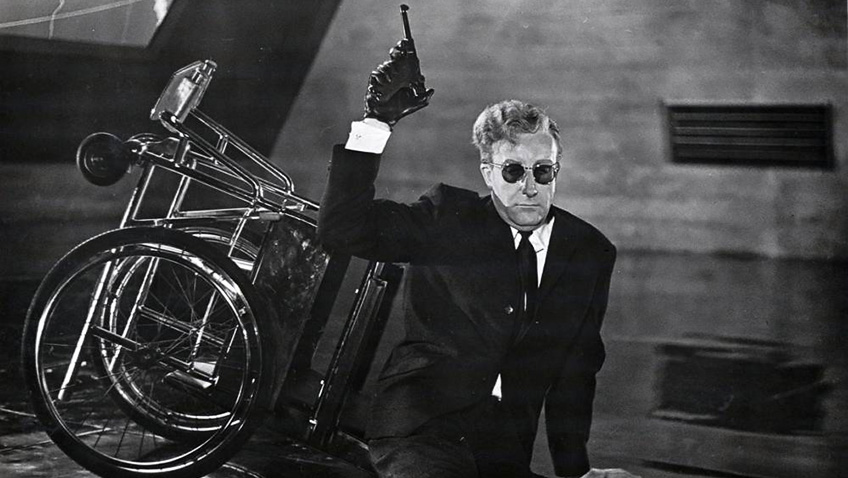 Peter Sellers in Dr. Strangelove or: How I Learned to Stop Worrying and Love the Bomb

When Major Kong is convinced that the dreaded Wing Attack Plan R order sent by Ripper is authentic, he tells his men, ‘Well I guess this is it: nuclear combat with the Ruskies.’ If Ripper might be suffering from PTSD, Kong might be affected from the Airborne’s long hours flying around outside of Russia waiting for something to happen. Arguably the most unforgettable image of the film is Major King Kong riding the H-bomb like a bucking bronco down to earth.

The third location, a real design tour de force, influenced by the film Metropolis and, perhaps, Fascist architecture of the 1930s, is the War Room. Here, Sellers, as President Merkin (which means a pubic hair wig) Muffley has to break up a fight between the Soviet Ambassador (Peter Bull) and the paranoid General Turgidson (George C. Scott), exclaiming, ‘Gentleman there’s no fighting here! This is the War Room.’ Kubrick had to trick Scot into playing the role of the warmongering General in a heightened manner by asking him to act ‘over the top’ for practice shots that wouldn’t be used in the film. Scot was furious to find these takes in the final cut and vowed never to work with Kubrick again. 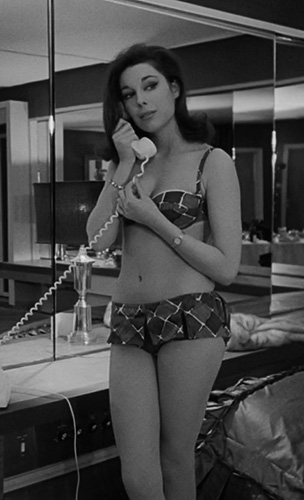 Tracy Reed in Dr. Strangelove or: How I Learned to Stop Worrying and Love the Bomb

Back at Burpelson, when Ripper confides in Mandrake that the Commies have been using fluoridation of the US water supply to poison the ‘precious bodily fluids’ of Americans, Mandrake realises his boss is bonkers and humours him, trying to get the code. It is not hard to imagine Ripper in the internet age when it seems the Russian really were influencing the elections with fake news campaigns. When, later in the film, the President orders the army to lay siege to the Base, Mandrake is arrested and has to convince an Army airhead that he’s the good guy.

In arguably the funniest scene in a film full of absurdist humour and gags, Mandrake, who has figured out the code, is reduced to calling the President of the USA from a pay phone, as Ripper has shut down the communication systems. When Colonel Bat Guano (Keenan Wynn) tells Mandrake that he does not take change into war zones, and the White House will not take a collect call, Mandrake orders Guano to shoot off the locks to the soft drinks machine so that he can use the change. Guano reluctantly agrees, adding, ‘but if you don’t get the President of the USA on the phone you’ll have to answer to the Coca-Cola Company.’

But Seller’s Mandrake has stiff competition from himself in Miffley’s hilariously surreal conversations with the Russian Premier and, of course, from his Dr. Strangelove. The mad scientist is modelled after the black glove-handed scientist Rotwang in Fritz Lang’s 1927 masterpiece Metropolis, as well as after Werner von Braun, who worked in Nazi Germany’s rocket programme, but was recruited by the Americans after the war. It was Sellers’ idea to borrow Kubrick’s black glove (which he wore to protect his hands from studio lights) for the role. As Strangelove is overcome with excitement at the discussion of the Soviet Doomsday Machine, his arm, afflicted with alien hand syndrome, keeps flying up in the Nazi salute, and he mistakenly addresses the President as mein Fuhrer.

Kubrick, who researched the subject of nuclear war extensively, initially intended the film to be a serious drama about mass paranoia and how it can lead to inertia. He began writing a serious screenplay with Peter George, the author of the underlying source material, the 1952 book Red Alert

. That it was transformed into a brilliant satire is down to the incredible talent in front of and behind the camera, first and foremost, Kubrick with his unique imagination, vision and attention to detail; scriptwriter Terry Southern and Peter Sellers, who, in addition to his three tour de force performances, ad-libbed most of his lines which ended up in the final script.