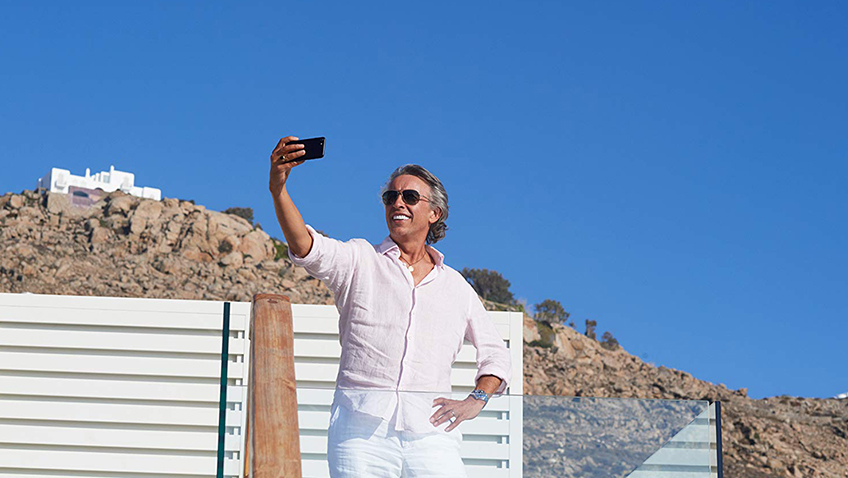 That Michael Winterbottom is interested in very rich people and the gap between them and everyone else, there can be no doubt. The Look of Love (2013) was a portrait of Paul Raymond, whose ‘adult’ publishing empire and strip clubs uprooted residents, destroyed traditional family businesses, changed the face of Soho and made him a multi-millionaire, at a high personal cost. In the documentary The Emperor’s New Clothes (2015), Winterbottom condemned financial inequality and attempted to show why nothing has changed since the 2008 financial crisis. Now Winterbottom has teamed up with his muse, Steve Coogan (who also played Paul Raymond), to portray another sleazy, decadent, unsavoury multi-millionaire, in Greed

. As with the title and the main character’s name, Richard ‘Rich’ McCreadie (a slur away from McGreedy), there is nothing subtle about this satire based on the disgraced multimillionaire Sir Philip Green.

is not structured chronologically around the key moments of its protagonist’s life, as was The Look of Love, there is a long flashback narrated by people who knew McCreadie. The story is, in part, told through interviews conducted by a scruffy, laid-back journalist named Nick (David Mitchell) who somehow landed the position of Rich’s official biographer.

We are told, and shown, that, in 1977, instead of being kicked out, obnoxious teenager Richard drops out of school at 16 to make money. He was no barrow boy – the school he dropped out of was an expensive private school. At his expulsion meeting with the head of the school, Richard is supported by his indignant mother (Winterbottom muse Shirley Henderson) who shares her son’s sense of entitlement.

‘’He didn’t need a mentor,’ an early colleague tells us about Richard’s early years in the rag trade. When Richard discovers that the wages in Sri Lanka are 50 pence per day, he goes to India and Sri Lanka and drives hard bargains with the sweat-shop proprietors, showing little interest in anything but how low he can go.

Flash forward, and the Monet of Money and The King of the High Street as he is called at an awards’ ceremony, is throwing himself a 60th birthday party on the island of Mykonos. The theme is ‘Gladiator,’ and Rich will be dressed accordingly in a white robe to match his ridiculously white teeth.

The theme seems to be a family in-joke because Rich, his creepy teenage son, Finn (Asa Butterfield) and his feisty ex-wife, Samantha (Isla Fisher) who remains part of Rich’s entourage, recite lines from the Ridley Scott movie by heart. One of the organisers has apparently not seen the film, however, because instead of a tiger there is a lion in a cage inside what will be the amphitheatre if the apathetic Greek and Bulgarian construction crew can pick up the pace.

There is another obstacle, too. In stark contrast to the McCreadie beach party, there is a family of homeless Syrian refugees on the beach and how would this look? This sight proves so distasteful to Rich that he orders them to be removed, before being reminded it is a public beach. Rich quickly recants in the face of negative publicity, blaming his concern on the superficial party guests, some of whom are being paid to attend.

More than an ego trip, the party is a public relations exercise to quell any rumours about the business. The party scenes are intercut with Richard’s appearance at a Parliamentary Committee hearing in which MPs are looking into McCreadie’s past record of bankruptcies and financial fraud. 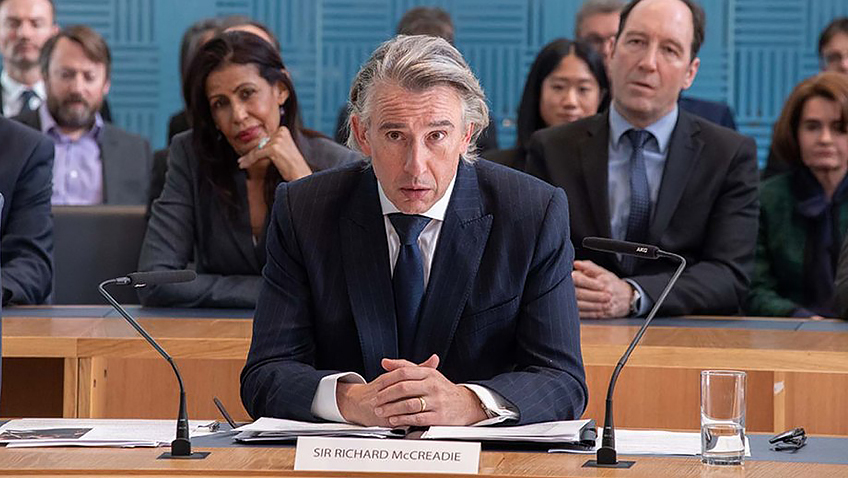 The party is also something for the books, and Rich is being followed around by Nick who befriends another outsider, Amanda (Dinita Gohil) whose mother is Sri-Lankan. We are never told just what Amanda’s position is or entails, but she has a particular interest in McCreadie that goes beyond a budding career in fashion.

The emergence of Amanda leads to a little subplot that adds some interest to the Greek party scenes. Although Amanda also provides a character with whom the audience can empathise, it has the feel of an underdeveloped Greek melodrama.

In an expository section, Nick meets with Samantha on their super yacht in Monaco (Philip Green’s holdings were allegedly all in his Monaco-based wife’s name for tax purposes) and tells him that the move to Monaco changed him. Here, they were just millionaires when everyone else was a billionaire. Interviewing a financial correspondent Nick gets a lesson in the financial dealings of bottom feeders. McCreadie was the master of taking public companies private, milking and selling off assets and using a company’s money to buy that company with none of his own money at risk.

Arcadia group is not alone in exploiting workers (mainly women) in developing countries and while not mentioned by name in the film, Primark clothing is even less expensive. But the fact that his company remained in dodgy private ownership with a face to the company name makes Sir Philip a Wolf of Oxford street, and a symbol. Statistics on captions over the closing credits confirm that the exploitation shown in the film is real.

The film wants to make us angry at this greed and possibly a bit guilty as consumers, but that’s easier than offering solutions. What do you do if you cannot afford garments hand made in Italy and if even the very British brand, Burberry is made overseas? It is completely plausible that even Amanda’s clothes are made in Sri Lanka or China by people just like her mother.

This role is no challenge for Coogan who has a blast portraying this superficial monster, although he is convincing enough. As the British version of The Big Short meets The Wolf of Wall Street, it has nothing new to say about greedy men. As an issue-based film about the rag-trade’s exploitation of developing countries, it is superficial and familiar; and as a biopic or satire, it is too close to the bone to be humorous.