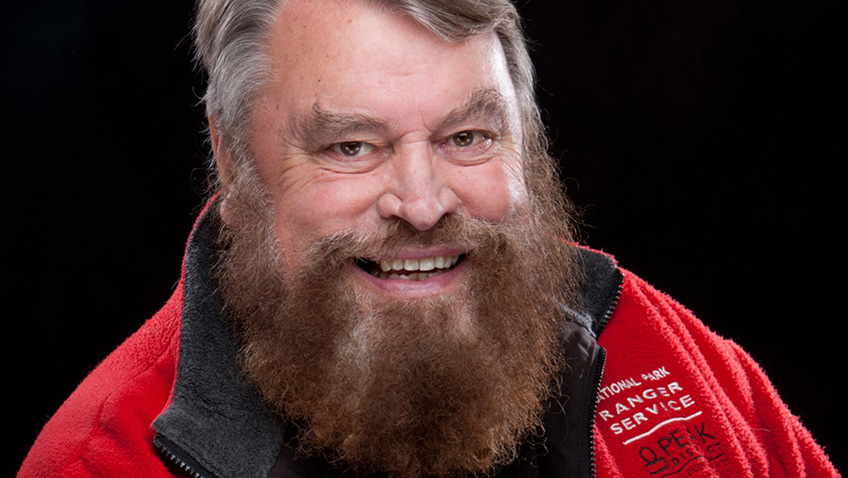 Queen‘s throbbing music pounds out, ‘Flash! Ah-Ah! Saviour of the Universe!‘ and there he is – a colossal presence, that proud gorilla-yeti of a man with a bellowing voice, big heart and super-sized ego – local lad Brian Blessed OBE (almost 83).

Full of optimism and wonder, this well spoken, self-proclaimed 50% actor, 50% explorer is the 100% embodiment of passion and joie de vivre. Mirth, merriment and expletives flow as Brian’s grasshopper anecdotes, songs, enactments, impersonations and Shakespeare recitals take off without always knowing for sure where they’ll land. “Where was I?” he asks from time to time.

But it matters not one little bit whether he was up Everest, on the set of Star Wars, at Nottingham Rep, having strange conversations with Placido Domingo, Alec Guinness, Peter O’Toole or Ken Branagh, pinching Sir John Gielgud’s bottom, larking about with pal Patrick Stewart as a youngster in Yorkshire, seriously dissing Ian McKellan, shouting “Gordon’s Alive!” for the umpteenth time, or making coffins that never properly fit the deceased; whichever of the hundreds of experiences or people he might tumble upon will bring fascination, hilarity and, of course, a touch of loud, over-the-top insanity.

In a shambles of departing trousers, ancient, ill-fitting jacket (one of two he owns) and a stripy shirt that hangs down in varying states of disarray, he sits on a chair that disappears beneath him. At times he gets up to pace and shuffle behind an unused armchair that also sits onstage. His double vision, he tells us, will last six weeks as a result of recently becoming a fully-trained astronaut/cosmonaut. He’s now ready for the Space Station, the moon – and beyond.

With breathless, brash, over-egged boasting, irreverent put-downs and unrivalled name-dropping he tells tales of his eccentric encounters with streams – and streams – of revered actors, scientists and world figures, all of whom, it seems, address him as Brian and love him to bits – the Queen, the Dalai Lama, the late Stephen Hawking, Patrick Moore, ex-PM Cameron, Putin, Masai tribesmen, submarine commanders in the Arctic, and even the man on the moon, Buzz Aldrin. NASA is still learning about Mars from Brian – from a chap who left Bolton-on-Dearne Secondary Modern with no qualifications, to help support his family, at times even having to beg, when his Shakespeare-reciting miner father was injured down a mine.

Lights undimmed, Brian can see his audience (twice) as they hang on his every word (as he, no doubt, would put it), ad-libbing jovially with individuals. His love of life and his ongoing determination to enjoy every adventure on offer are as strong as his voice and certainly not declining with age. He claims emphatically that there’s no such thing as death and that he fears nothing. Well, even a Kodiak bear fled in dire panic when the erstwhile boxer and judo black belter roared at it and punched it on the nose!

His passions, convictions and positivity are powerfully strong, and the natural world is particularly important to him. He’s helped create butterfly farms on the South Downs and fully praises and supports our National Parks. In the autumn he’s off to persuade the Japanese not to hunt whales. His home in Surrey (and apparently, the kitchen at times) is filled with assorted rescue donkeys, ponies, cats, dogs and poultry, while proceeds from tonight’s ticket sales will help the work with rescue animals, as did the fee for his famous Blessed performance as tenor Pavarotti on Stars in their Eyes. Operatically trained Brian wows the audience with a burst of his Pavarotti,and bursts of his Old Deuteronomy performance in Cats (plus others’ performances in Cats), not to mention his Grampy Rabbit in Peppa Pig. “There’s no end to my talents”, he says modestly. He also used to voice Sir Morris in a wonderful cartoon called Big Knights. An omen, perhaps?

As Flash! Ah-ah! throbs again, born entertainer Brian and his super-sized lungs leave the stage, off to continue their thrilling life, travelling first from his native South Yorkshire back to his beloved wife and menagerie in Surrey, and soon, most likely, to space, the Moon and universes beyond.