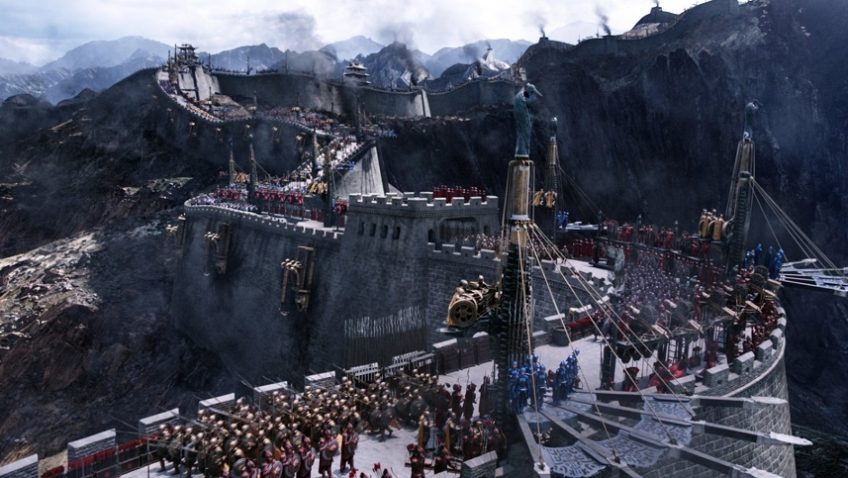 What is 46-year-old, Matt Damon, recipient of three Academy Award nominations for Best Actor/Supporting Actor, doing on the Great Wall of China killing mythical Chinese dragons?   Well, given the $150 million budget of Zhang Yimou’s (Red Sorghum, Raise the Red Lantern) patriotic, action-fantasy extravaganza, it is probably more the pay cheque than any attempt at boosting international relations.  Preposterous though the premise might sound, it is actually not preposterous enough to stand out.  Despite a script riddled with clichés,  the money is on the screen, with dazzling special effects and meticulous period detail and not a sanctimonious “sanctimonioussanctimonioussanctimonioussanctimonious American in sight.

The film opens in the Gobi Desert with a band of grubby white mercenaries on horseback being pursued by local bandits who know the area a lot better. A number of the surviving group, who are looking for ‘black powder’, take refuge outside of a cave. Before they realise what is happening, several of the band are killed by an unseen creature, leaving only two men: William (Damon) and Tovar (Pedro Pascal from Game of Thrones).  William has managed to lop off the hand of the monster, and are spooked by its size, with no idea what it could be.  They soon find out when they ride straight into the Great Wall and find themselves prisoners of The Nameless Order, a secret military order whose purpose is to guard the empire from Taotie, and alien monsters that emerge every 60 years.

When General Shao (Zhang Hanyu), the army’s strategist, Wang (Andy Lau) and Commander Lin (Jing Tian) see the severed hand (which William has brought with him),  they are shocked, as it means the monsters are close by.  Actually, they are about to storm the wall.

The dragon-hybrid is nothing we haven’t seen before, but they are definitely ugly animals as opposed to Orcs or robotic monsters.  It is their sheer number that is daunting – and those huge giant alligator jaws. The monsters might be CGI but the army is real and the strategies for defending the wall are impressive.  Each squadron has its own tasks in this well-oiled operation. One squadron, The Crane Troop, is composed of female soldiers who, like bungee jumpers tied to the wall with ropes, walk out on planks resembling diving boards.  Turning into birds of prey, they swoop down on the dragons to kill them before returning (if lucky) to their perches.

Chained together as prisoners facing a death sentence, William and Tovar realise they now share a common enemy with their captors. A bright, practical young soldier Peng Yong, (Lu Han) reaches the same conclusion and frees the men. They do not disappoint. William, an expert archer, kills quite a few beasts before saving Peng Yong in one of those Western staples: the quid pro quo. The monsters retreat and a new prisoner/captor dynamic emerges.

William, impressed with the Chinese teamwork and their courage in protecting their country and Emperor, finds a purpose to his marauding life. Then again, William nscrubs up pretty well and, having earned the pretty Commander Lin’s attention and gratitude, is feeling good about himself, not to mention his romantic prospects.

Whatever mid-life crisis William is going through, Tovar remains true to form. Now in league with Sir Ballard (Willem Dafoe), the army’s resident English teacher, imprisoned by the Chinese 25 years earlier for trying to steal black powder, Tovar and Ballard are planning a daring escape with stores of black powder buried in the Wall.  To Tovar’s disappointment, William refuses to go and instead volunteers to test an ancient theory that the Taotie are subdued by magnets (the Chinese are clearly trying to impress with their ancient civilization’s discoveries, although the Greeks claim they discovered magnetic properties first, in the 1st century AD). 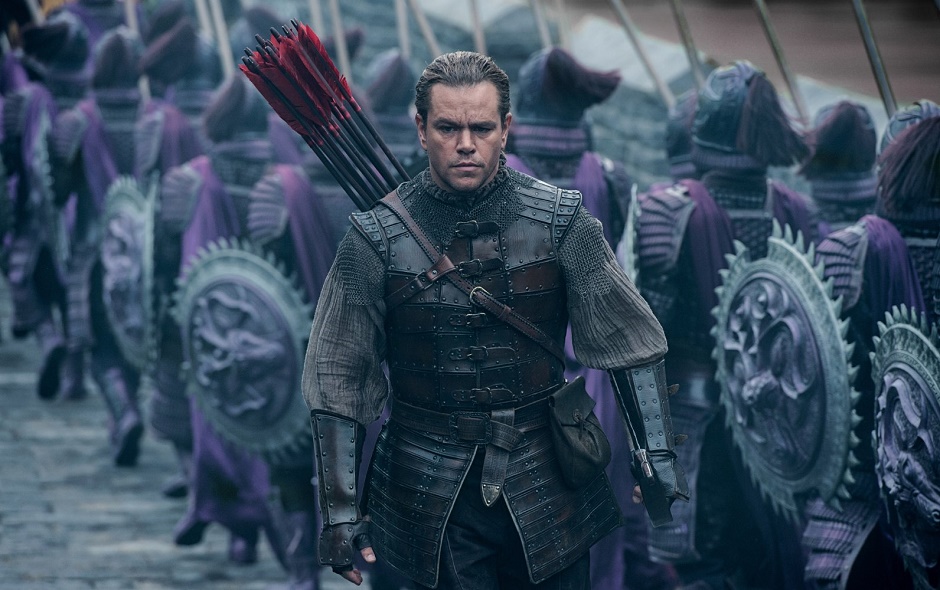 As the army (Lin is now in charge after Shao’s death) prepares for the second onslaught, and Tovar and Ballard escape, Lin decides to set William free to warn the country of the danger.  In what is called ‘the turning point’ of the story, William decides to stay and risk his life for the Chinese cause.

The Great Wall will not do much for Damon’s career as his character is standard fare while is arch is predicable.  There are three scriptwriters credited, but not a bit of much need humour and quirkiness.  The William/Tovar bromance provides the story people (of which there were also three, including Edward Zwick, who wrote The Last Samurai and Jack Reacher: No Way Back) with a convenient way out of China.

That said, the film is distinguished by a coming together of civilisations in a way that is neither insulting, sentimental nor condescending.  There is also a nice mix of Chinese mythology (theTaotie) and a historic basis for the mercenary’s search for black powder.  Gunpowder was invented by Chinese alchemists in the 9th century and the first written record of its formula is from the Song Dynasty (early-mid 11th century).  It has always been in demand and, as Guy Fawkes learned the hard way, has always been a perilous substance.