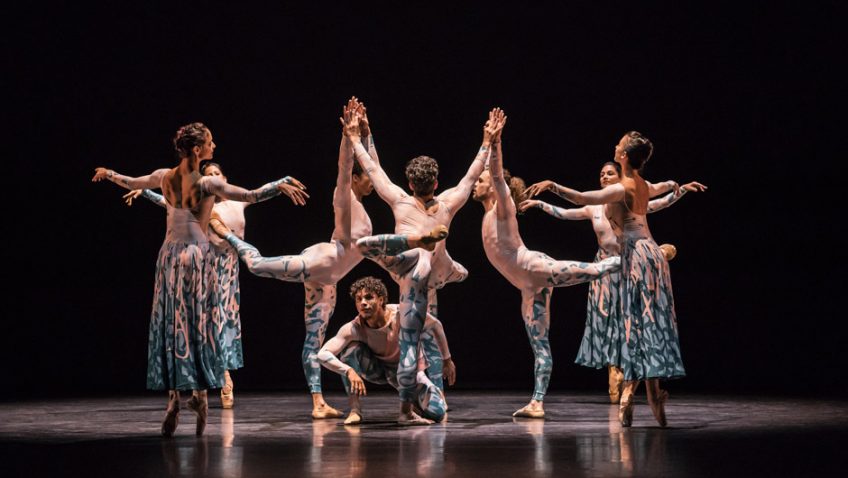 Carlos Acosta has many admirers internationally and one thing is absolutely certain and that is that the ballet world will want him and his newly created company to be a success.

The photographs of the dancers in multiple interweaving groups, which are reproduced in the printed programme, whet the appetite for the performance. The programme he has brought to the UK from Havana is not about him but about the company. He only makes one brief modest guest appearance.

One of Acosta’s key aims is to showcase the works of choreographers from the Spanish-speaking word. There are six highly varied works. All the dancers in his company are given equal opportunity. There are no principal dancers.

The showcase opens with Marianela Boan’s The Crossing Over Niagara to music by Olivier Messianen which was created in 1987 and inspired by French tightrope walker Charles Blondin crossing over Niagara Falls.

Julio Leon and Raul Reinoso, all-but naked, wearing only jockstraps, move with measured strides and in slow motion on a lighted traverse strip. It is an extraordinary feat of balance without a hint of unsteadiness.

The two bodies are so close they become one body, one movement. And sometimes they carry each other on their shoulder, a breathtaking homage to Blondin.

Goyo Montero’s intriguing Imponderable has smoke machines and lots of energy and lots of handheld torch lamps which are constantly rearranged on the floor. There is a voice-over and a song by Silvio Rodrigues, both in Spanish. Alternating between despair and hope, and danced on a darkened stage, it feels political, apocalyptical. Would sur-titles help? I doubt it; the piece is deliberately incomprehensible and indescribable.

Carlos Acosta makes his brief appearance in Sidi Larbi Cherkaoui’s Mermaid. He tenderly partner Marta Ortega as the drunken and constantly collapsing mermaid. The music for this short and mysterious duet is by Woojae Park, Eric Satie and the choreographer.

The show ends with Jorge Cresis’s athletic Twelve to an electronic score by Vincenzo Lamagna, a perfect item for basketball players in training. The dancers, instead of throwing balls, throw neon-lit bottles of water at each other. They have to be on the ball to catch them. It’s a fun piece.

Acosta Danza Debut will be visiting Salford, Birmingham, Southampton and Brighton in October and Edinburgh in November.