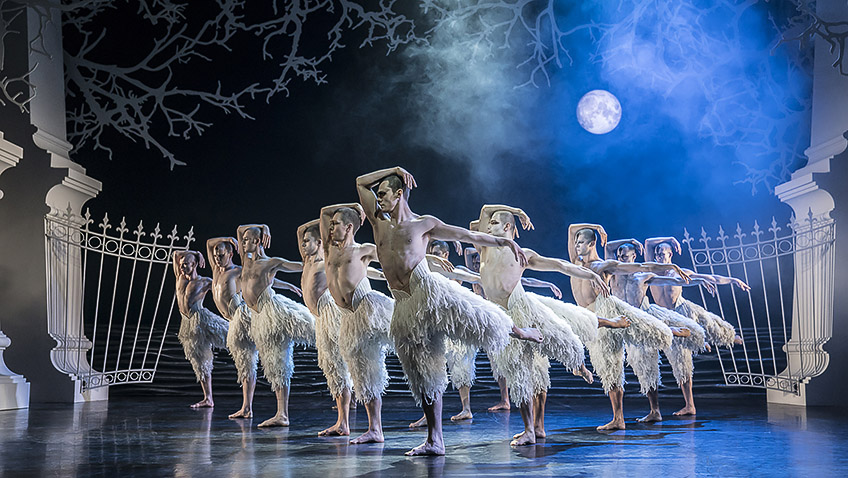 There have been many versions of Swan Lake but Matthew Bourne’s version in 1995 in which all the swans are male is one of the most radical and one of the most overt homoerotic interpretations.

Matthew Bourne has introduced a totally new audience to ballet.

Performed over the years since then in two West End theatres, the Piccadilly and the Dominion, it has had the sort of success, worldwide, which is usually reserved for a big Broadway musical. 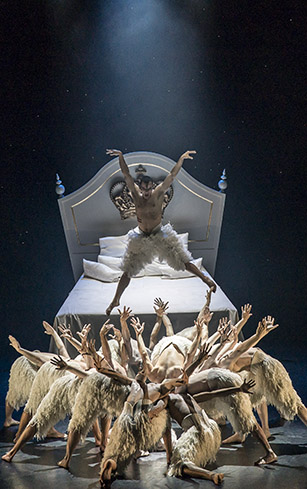 Will Bozier and ensemble in Swan Lake

The last time a ballet was able to fill a West End theatre was back in the 1920s with Diagheliv and Les Ballets Russes.

The corps is no longer ballerinas all in white in a tutu gliding across the stage on their points. They are male, feral, hissing, stamping, and they have bare chests, bare feet, bare calves, feathered legs and they surge across the stage The choreography brings out their violent nature.

There are three rotating casts. I see Will Bozier in the dual role of Swan and Stranger and Dominic North as Prince.

The story, set in the 1950’s and designed by Les Brotherston, opens with the young Prince in bed, dreaming of a beautiful white swan. When he grows up he falls in love with the most unsuitable girl. He gets drunk and visits a seedy club. On the way out, he is photographed by the tabloid press. He decides the best thing to do would be to drown in the lake of a royal park. He is stopped in his tracks by a vision of swans.

The Black Swan is rough trade. Dressed in black leather and carrying a riding crop, he dances with the Prince, who is totally bewildered because the guy looks so like the White Swan of his dreams and yet so obviously isn’t. Shocked by the discovery of his true sexuality the Prince goes mad.

Hospitalised in the palace he and the White Swan are pecked to death by the swans who appear from under, over and through his bed, some leaping on it. It is a thrilling dramatic finale. It is the male swans en masse that audiences will be talking about when they come out of the theatre.

Swan Lake is the most popular ballet in the world, its popularity due to Tchaikovsky’s bitter-sweet music. The pleasure of the evening is watching Bourne’s unpredictable responses, comic and serious, to a very familiar score.